Bug Squad
sitenum=63
Happenings in the insect world
Hurrah for the Red, White and Blue! And the Yellow... George Washington portrait by Gilbert Stuart. (Courtesy of Wikipedia)
Today is the Fourth of July, and what better time to proclaim: "Hurray for the red, white and blue!"

On a camping trip last week to Doran Regional Park, Bodega Bay, we admired our neighbors' display of American flags—bordered with a dozen honey bees.

These bees, however, didn't buzz. They spun.

The colorful yellow, black and white mobiles attacked the wind like fierce little windmills, livening up the campground.

“Are you beekeepers?” I asked the neighbor.

Mount Vernon research historian Mary Thompson notes that George Washington was the first U.S. president to keep bees. In Washingtonpapers.org, she writes that his "indentured English joiner,"  Matthew Baldridge, received 300 nails at the Circle Storehouse on July 28, 1787 "to make a bee house."

"Two days later, Matthew received another 200 nails for the same project," Thompson notes. "In addition to getting honey from his own bees, George Washington is known to have purchased honey, as well as other foodstuffs such as chickens, eggs, vegetables, and fruit from his slaves. Honey, for example, was acquired at various times from Nat (a blacksmith); Davy, who was an enslaved overseer;and carpenters Sambo an Isaac, indicating that they, too, probably kept bees." A Cordovan honey bee. (Photo by Kathy Keatley Garvey)
Thompson says that "Bees would have been prized for making the honey, which was one of George Washington's favorite foods. Both family members and visitors made note of the fact that Washington usually ate hoecakes, a 'typically American'  dish thought by some historians to be a reflection of slave influence on Anglo-American cuisine, and honey for breakfast. Houseguest Winthrop Sargent found breakfast with the Washingtons to be a 'very substantial Repast,' but noted that 'Indian hoe cake with Butter & Honey seemed the principal Component Parts.” This honey bee was not seeking nectar or pollen, but the wind. (Photo by Kathy Keatley Garvey)
Brittanica.com defines hoecakes as "a mixture of cornmeal, water, and salt, so named because they were originally baked on the flat of a hoe over a wood fire."

Thompson says President Washington also liked cake spread with honey and butter: "A visitor from Poland reported that Washington had “tea and caks (sic) made from maize; because of his teeth he makes slices spread with butter and honey….”

The founding father also liked gifts of honey. Knowing his fondness for honey, sister Betty Washington Lewis gifted him with a "large Pot of very fine in the Comb," when the president was recovering from a serious illness.

The Mount Vernon research historian also relates: "At the close of Washington's presidency eight years later, among the many things the family packed to ship back to Mount Vernon from Philadelphia was 'one demijohn with honey.' A demijohn was a very large glass bottle, covered with wickerwork."

Honey for the hoecakes, hoecakes swimming in honey... 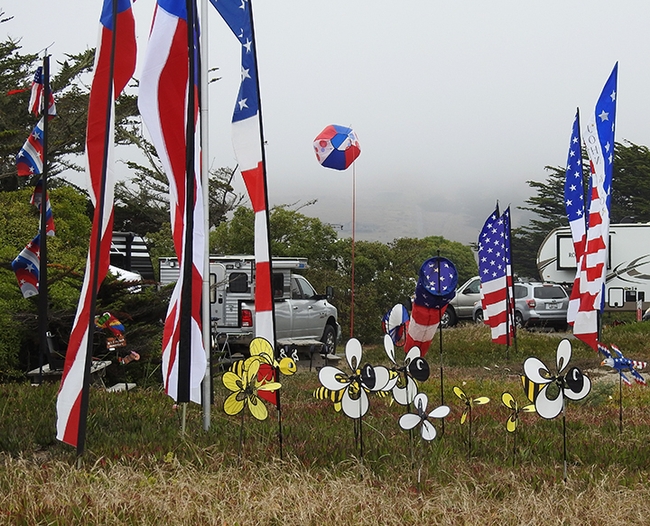 Hurrah for the red, white and blue! And the yellow. Honey bee mobiles were spinning in the wind at a Bodega Bay campsite. (Photo by Kathy Keatley Garvey) 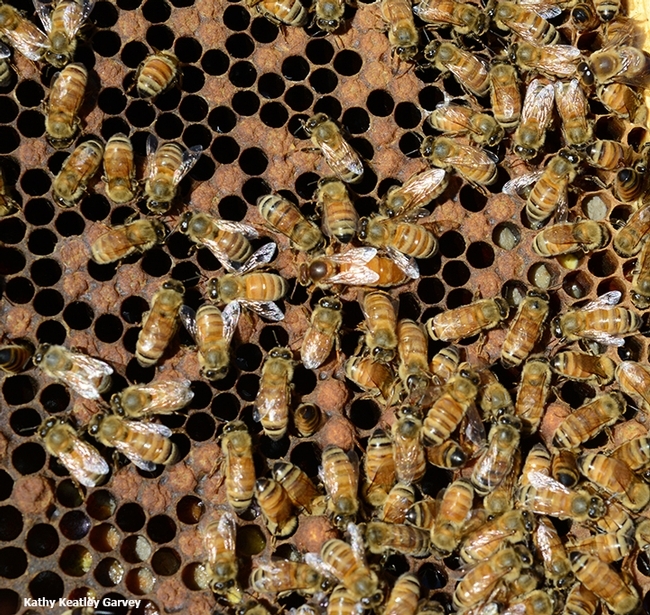