A swarm of Africanized honeybees attacked a 70-year-old man in Modesto last week in the first reported assault by so-called "killer bees" north of Tulare, the Modesto Bee reported. The man was stung more than 50 times, but survived the attack.

Laboratory tests determined the bees were "Africanized," or hybrids descended from swarms moving north from Brazil since scientists brought African bees to breed in the late 1950s.

A UC publication, Africanized Honey Bee Facts, says the insect's killer reputation has been exaggerated. The bees look and pollinate the same as common European honeybees, however, they are less predictable and will pursue a perceived threat for a quarter mile or more.

Victim Jack McBride said the bees zeroed in on his head. They stung inside his nose and on his eyelids, face, neck, armpits and torso, the Bee reported. McBride fell, lost his glasses, tried rolling and finally ran, half-blinded, about one-eighth of a mile to take shelter in a house - bees chasing him the whole way.

Mussen told the reporter the Africanized honeybees were most likely trucked into the area by a commercial beekeeper to pollinate almonds, and a swarm escaped to establish a new hive. He considers it unlikely that African bees moved that far north on their own without confrontations reported in other counties, such as Fresno and Merced.

The article also ran in the Fresno Bee, the Sacramento Bee and the Boston Herald, 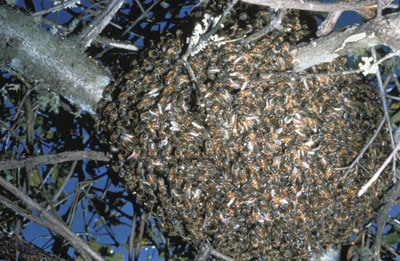 Bees swarm to form new colonies. Swarming bees may rest for a while on a branch or other object, but generally leave in a day or two.
Tags: Africanized honeybees (1), Eric Mussen (15), honeybees (7)
Comments: 0
No Comments Posted.
Leave a Reply: