UCANR: Promoting economic prosperity in California
The Ecology of Farming and Unintended Consequences
Published on: August 26, 2022

Problem: There was a Valencia farmer in Ojai, farming on a rocky loam. More rocky than loam, on a 10 % slope, where he had been spraying the weeds down, the soil had gradually washed away and all he had left was scattered cobbles.

Solution: He planted a winter cover crop to protect the soil from erosion. He weed whipped it three times a year because that's all he could afford.

Result: After two years he had stopped the erosion, and there was actually a little duff layer forming in the orchard from the decomposing ground cover.

Problem: But now that wonderful cover crop and the cover it provided had attracted gophers that were chewing on the trees and because of inattention had killed a few of them. He couldn't trap fast enough.

Solution: He brought in a ‘Jack Russell' terrier that did a marvelous job at keeping the beasts down.

Problem: Now the terrier is distracted by the fowl and is killing the chicks and goslings, as well as the gophers. In fact, he would prefer chasing the fowlings to going after gophers.

Solution: He tied a tether ball around the terrier's neck which slowed it down enough so that the young ones could get away.

Problem: Also with the introduction of birds, he also brought in coyotes which killed the larger birds.

Solution: He brought in a ‘Queensland Heeler' which is a bred that is noted for killing dingos in Australia. They are short-legged, barrel chested dogs that roll over on their back and pretend to be dead and when the coyote comes sniffing around, it grabs the coyote's neck and kills it.

Problem: What's next in this cause and effect chain of events?

This is a true story, but in today's world because of Food Safety and Good Agricultural Practices Certification would not happen with all these animals in the orchard, but something like it happens every time we overturn the flow of events. This is not the only scenario that is played out in agriculture. But hey, that's what a good grower is doing, managing a somewhat chaotic chain of events.

The end of the story is that the grower died and another bought the farm and turned it into a goose/duck farm and sold the animals rather than the oranges which the birds were feeding on. 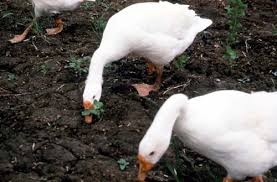