"We really don't seem to have accomplished a whole lot, because we're still losing, on an average, approximately 30 percent or more of our colonies each year. And that's higher than it used to be," UC Cooperative Extension bee expert Eric Mussen told reporter Spencer Michels. "Only 25 percent of the beekeepers seem to have this CCD problem over and over and over. The other 75 percent have their fingers crossed and say, I don't know what this is, but it's not happening to me."

Michels outlined some of the research into the possible causes of persistent bee decline. At UC Davis, scientists are trying to find ways to improve bee health by changing what they eat and selectively breeding healthier, disease-resistant bees. At UC San Francisco, scientists are extracting DNA or RNA from healthy bees to analyze what viruses or bacteria are present.

"We found four new viruses in this study, and one of them was so frequent, there was more of that virus present than every other virus that we have know about put together," said UCSF's Charles Runckel.

A beekeeper featured in the program said he maintains healthy bee colonies by keeping them "forever young." Randy Oliver splits his hives every year, taking half the bees out and starting a new hive.

"That simple act of splitting gives the bees a fresh start. And, in nature, that's what they do. Bees -- bees reproduce frequently. They swarm every spring, and they give themselves fresh starts. And that's what beekeepers are tending to do, too," Oliver explained. 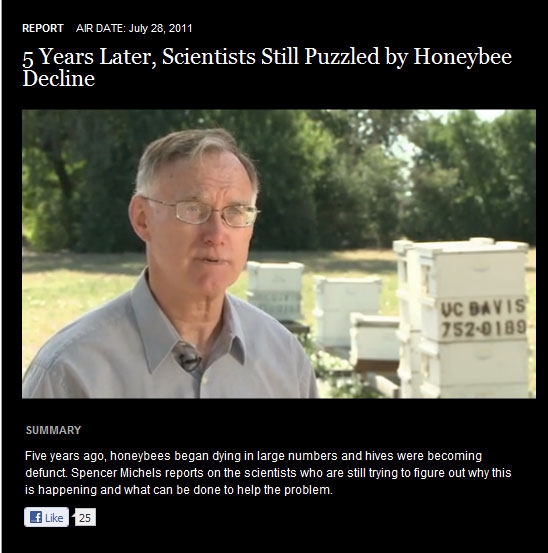