Bug Squad
sitenum=63
Happenings in the insect world
Why Are the Bees in the Pool?

The declining bee population: Does chlorine in a swimming pool have anything to do with it?

Ever since PBS NewsHour correspondent Spencer Michels interviewed Extension apiculturist Eric Mussen of the UC Davis Department of Entomology and several other UC scientists and bee folks on the declining honey bee population, it's been busy on the bee front.

Everyone seems to have a theory on the cause of colony collapse disorder (CCD) and why the bee population is declining.

One person, known as "DK," posted a comment on the PBS NewsHour site that maybe chlorine has something to do with it.

"Every morning, when I sweep (skim) the family pool here in Sherman Oaks (Los Angeles), Calif., at least 3-4 bees from a hive in a nearby hedge are dead in the water, and I don't think it's from drowning," DK wrote. "It's like the La Brea Tar Pits were eons ago:  The sparkling pool looks like potable water, but it just lures them to their deaths...When I "googled" this subject, it turned out a farmer in the San Joaquin valley who was experiencing colony collapse discovered that a neighboring farmer was using a chlorine based pesticide in his irrigation water on the adjacent watermelon patch; when I read further into it, the article said chlorine was a suspected 'neuro-toxin" for the bees, and that corresponds with my empirical observations.  The chemical component also might explain why only 25% of bee colonies are experiencing this problem."

"So, scientists in northern California and elsewhere, that's your clue:  CHLORINE (and its derivatives).  It's worth a look."

"I read with interest your concern about a possible connection between chlorine and our honey bee problems.  I believe that you are correct that honey bees actually prefer a bit salty water to pure water, so they might be attracted to your swimming pool water.  However, honey bees do not like to get their feet wet when collecting water, if they can help it.  They stand on the dry and drink from the film of water caused by capillarity.  If you find one drinking water near your pool, on the poll apron, pool wall or a floating toy, check their behavior.

"The bees you find in the pool probably were not there for drinking purposes.  You noted that you have a colony living nearby.  Each day that colony raises about 1,000 newly emerging adult workers and around six weeks later those 1,000 bees will die of old age.  They do not die in the hive.  They tend to keep foraging until they flutter to the ground (lawn, driveway, sidewalk, pool, etc.) wherever they may be.  Those bees are not yet dead, so for a little while they still can sting if bumped against or stepped on.  That is most likely why they keep ending up in your pool.

"In reference to your statement about chlorine in pesticides harming a beekeeper's bees, there have been a succession of pesticides with chlorine incorporated into their structures that are toxic to bees.  The group named organochlorides are pretty much obsolete, but a new group of chemicals, called neonicotinoids, have a chlorine in them.  Beekeepers fear those compounds because they become systemic in the plants and are found in the nectar and pollen when the plants bloom.  Recently, the systemics have been delivered in irrigation water, since they can be picked up from the soil by the plant roots.  In 'chemigation' with underground emitters, you would think that the chemicals would stay away from the bees.  But, the systems leak and the bees will forage at the junctions in the pipes and from puddles on the ground.  So, the bees get the chemical at field delivery concentrations, not at the much reduced concentrations that end up in the blossoms."

Speaking of water, as any beekeeper will tell you, bees don't like to get their feet wet.  Honey bees don't dive into a pool on a hot summer day. They don't head for the sprinklers for a quick shower. They don't stand in water.  When they collect water to cool their hives, they stand on the very edge of a water-filled container, such as a birdbath or the lip of a flower pot.

Which reminds us: a recently published children's book (for ages 4 to 10) about honey bees seemed to have it all: colorful illustrations, catchy lines, and educational information about bees.

"What's wrong with this illustration?" I quizzed a veteran beekeeper. He looked at me as if I'd just asked him the second letter of the alphabet.

"Bees," he said, "don't like to get their feet wet. Those bees in that illustration are walking in water. They don't do that." 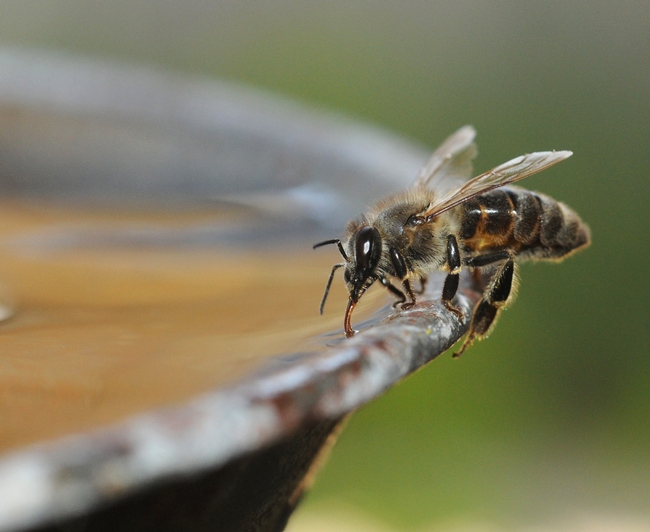 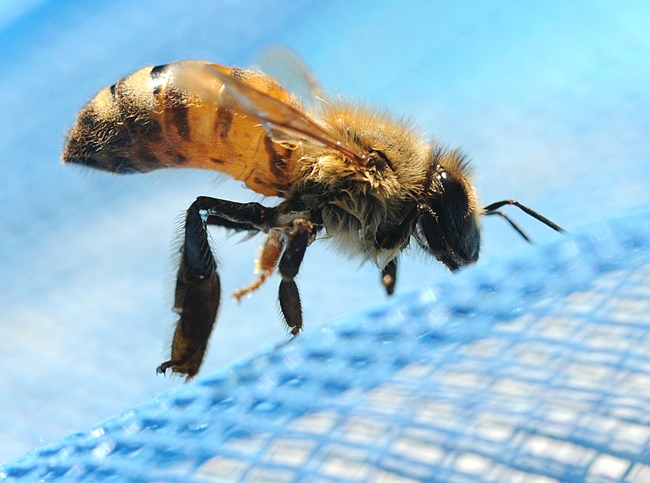 Drenched bee fished out of a swimming pool. (Photo by Kathy Keatley Garvey)
Tags: chlorine (1), Eric Mussen (248), honey bees (386), PBS NewsHour (3), water (6)
Comments: 8
Comments:
by Caroll
on June 5, 2014 at 6:32 AM
Why does everyone forget to mention that bees like slightly moving water, not a pond where the water doesn't move. The fish in the pond, a constant drip or the sweeper in the pool. Not the canal where the water may move too fast or the fountain. Turn off the movement and bees may light but not swarm as in hundreds or thousands that I have seen around swimming pools. Ive watched the bees in and around my pool. When they take over the pool they even knock each other in. They are falling in and climbing out so often you would swear they were enjoying. Problem is not all climb out, some drown. People who have suggest you create another source, well i have a canal behind my property and neighbors with pools and a fountain and when bees decide its your pool they want. Good luck because they come to the pools each by the hundreds and I am not talking bees that you splash away, a minor inconvenient. Im texting about a pool take over. I know a man who lost the use of his pool and jacuzzi for years due to bees. Bees by the thousands, floating in the pool by the hundreds. The hive, on an Indian Reservation. Very complicated. Good luck to all
by Sue
on January 15, 2016 at 6:25 PM
I have a small kiddie pool that the bees flock to. I have a screen splatter kitchen utensil propped up so they can get out if the fall in. However, today there were about 200 dead bees in the pool. All I can think of is that although the temperature rose into the 50's today, they died because the water was too cold. Any thoughts? There are no chemicals in this water, simply well water and rain.
by Debbie
on October 23, 2016 at 9:27 PM
I wonder, I find several bees in my pool. Every day. I'm sure there is a hive nearby. My karob trees are full of the bees... The ones that are still alive, I fetch out of the pool and place in the sun to dry off. My husband thinks I'm nuts, stating they're going to die anyway. I'm not sure, and if not, do they live longer or turn around and dive into the pool again?
by Lynn Kupilik
on June 13, 2018 at 1:02 PM
I have had thousands if not tens of thousands of tiny wood bees landing on my pool surface for three days now. It is insane. Not only are they drowning in epic numbers, but it is impossible to swim. We are stumped. We have had the pool BEBHJH for over 30 years and this has never happened before.
by Flipper 68
on July 14, 2018 at 9:22 AM
I find about a half dozen bumble bees in my pool skimmer each week. What little I understand about them makes me think that I am not only finding them dead but have doomed their nest because, as I understand it, the bumble bees are solitary nest builders and do not have a whole hive, as honey bees do, to keep everything going. I'm kind of glad to have bumble bees around because one cold spring before the honey bees were warm enough to come out and do their thing, the bumble bees were the only ones I had to pollinate my apricot trees. Thanks in advance for any info you can pass along.
by Lee Mayer
on May 10, 2020 at 2:26 PM
I just rescued about 100 bees that were in our pool. After taking them out and placing them on the coping, they dried off and flew away. We have never seen that before here in Annapolis, any thoughts?
by sermed havuz
on May 25, 2020 at 10:07 AM
We dealt with the pond pump through the summer, but knew we would get a filter pump (for real pools) this summer
by Dawn Kolakoski
on January 8, 2021 at 4:43 PM
I scoop out 1-2 bees each day from my pool. It's winter and the water is about 40°. I carefully put them down in the sun. They look dead, but slowly I'll see some movement; they rub their faces with their legs and the roll over and fly off. I put one right next to a flowering rosemary bush and once she came back to life she walked right over and started on the flowers. So they may not be dead--just stunned with the cold! I brought 5 back to life this week! 😀
Leave a Reply: