So when the 2018 Paradise fire, known as “The Camp Fire,” destroyed his home, all his possessions and his hometown, his associates stepped forward with donations, including Bohart Museum t-shirts to replace those that he lost in the fire.

The Camp Fire was the deadliest and most destructive wildfire in California's history, and the most expensive natural disaster in the world in 2018 in terms of insured losses. Named after Camp Creek Road, its place of origin, the fire started on Thursday, November 8, 2018, in Northern California's Butte County...The Camp Fire caused at least 85 civilian fatalities, with one person still missing as of August 2, 2019, and injured 12 civilians and five firefighters. It covered an area of 153,336 acres (620.5 km; 239.6 sq mi), and destroyed more than 18,000 structures, with most of the destruction occurring within the first four hours. The towns of Paradise and Concow were almost completely destroyed, each losing about 95% of their structures. The towns of Magalia and Butte Creek Canyon were also largely destroyed. By January 2019, the total damage was estimated at $16.5 billion; one-quarter of the damage, $4 billion, was not insured. The Camp Fire also cost over $150 million in fire suppression costs, bringing the total cost of the fire to $16.65 billion.--Wikipedia. Close-up of the Jerusalem cricket t-shirt, an illustration by Allen Chew, UC Davis student and Bohart Museum volunteer. The insect is also known as a potato bug.
Fast forward to Monday, Sept. 12, 2022: Brennen Dyer steps forward to receive a special award at the UC Davis Staff Assembly's annual Citation of Excellence program and shake the hand of UC Davis Chancellor Gary May. Dyer is wearing a Bohart t-shirt, lettered with “What Is That Thing?” It features  a Jerusalem cricket, aka potato bug, an illustration by UC Davis student and Bohart volunteer Allen Chew. The finishing touch? A humorous quote from Lynn Kimsey, director of the Bohart Museum and a UC Davis distinguished professor: “Basically, Vienna sausages with bitey jaws.”

At the ceremony, Dyer receives the honorable mention award, or second-place honors, in the highly competitive service category for providing exemplary services to students, staff, faculty and/or the general campus;  making notable contributions to the department and/or campus; for creating and maintaining high morale, and for embodying the principles of community.

Today Dyer credits his “love of science” with helping him overcome life's hardships. “And now in return, he inspires others to love science,” wrote his three nominators Professor Kimsey; Tabatha Yang, education and outreach coordinator; and Kathy Keatley Garvey, communications specialist, UC Davis Department of Entomology and Nematology, who said he "epitomizes the excellence of our UC Davis workforce."

Kimsey described him as “bright, gifted and personable. It doesn't matter what needs to be done in the museum, curation, insect identification, live colony care, computer or software issues, and working with student volunteers, he  takes care of it. It is so rare to find someone who can do some of these tasks so well, much less all of them like he can.” The Jerusalem cricket. (Photo by Kathy Keatley Garvey)
Dyer, who holds a bachelor's degree in entomology (2018) from UC Davis, began volunteering at the Bohart Museum in 2015, advanced to a paid internship in 2016, and then in 2018, accepted his current position as the lab assistant.

“(Brennen) is what I would generally characterize as a servant leader, defined by a philosophy and practice that aims to enrich the lives of the people," wrote another professor.  "He works to build a better organization, and create a more caring environment for everyone.  He is an exceptionally hard worker who is always available to assist students, staff, volunteers alike.”

An alumnus pointed out: “(Brennen) is incredible. He is intelligent, meticulous and proactive, and goes above and beyond to assist peers and colleagues. For example, when I was finishing my PhD thesis, I needed photos of insect specimens to add to my last chapter, but I had neither the time nor the skills to utilize our modern microscope to photograph specimens. He generously offered to help, and did so perfectly and quickly. If he hadn't been so reliable and proactive, I wouldn't have been able to finish my PhD in time.”

Other comments from faculty and colleagues:

Dyer said he is humbled and honored to be singled out for the award. UC Davis Chancellor Gary May told the crowd: "I am proud of all UC Davis staff, but the individuals and teams we honor this afternoon have gone above and beyond in contributing to the university's success." (Photo by Kathy Keatley Garvey)
In his remarks, Chancellor May told the crowd: "This is truly an exciting time for UC Davis. I hope you heard that we were ranked No. 2 nationally among public universities in Washington Monthly's 2022 Guide and Rankings. On top of that, UC Davis retained its No. 4 public university ranking in America's Top College List 2022 by Forbes. In some places UC Davis is the top, such as No. 1 for sustainabilty. UC Davis is also ranked No. 1 in the nation for diversity, inclusiveness and internationalization. And, we recently set a university record by attracting more than $1 billion in annual research awards. Fewer than 20 universities in the country can claim this."

"I could go on," the chancellor continued, "but the fact of the matter is that we are doing great work at UC Davis, and each of you are a part of this effort. I know how important your expertise, experience and institutional memory are to advancing the university's success. It's sometimes difficult to appreciate how our individual contributions make a difference in the 'big picture.' But every day, the work of staff are critical to our university projects, our operations and our campus environment."

Chancellor May pointed out: "These behind-the-scene efforts are what keep UC Davis humming and in tune with our mission of excellence in teaching, research and public service. They are a big part of what your university and Staff Assembly recognizes and thanks you for today. The individuals and teams we honor this afternoon have gone 'above and beyond' all expectations to make UC Davis a more enjoyable, creative, inclusive and invigorating place to work."

He added: "I am proud of all UC Davis staff, but the individuals and teams we honor this afternoon have gone above and beyond in contributing to the university's success. Thank you so much for your outstanding contributions to UC Davis. Our university is a better place today because of your accomplishments, because of your hard work and because of your inspiring dedication to excellence."

In all, the UC Davis Staff Assembly awarded individual honors in five categories: innovation, mentorship, service, supervision, and teaching, as well as a team award and a faculty and staff partnership award. The judges also awarded scholarships to staff and staff dependents.  (See award winners) 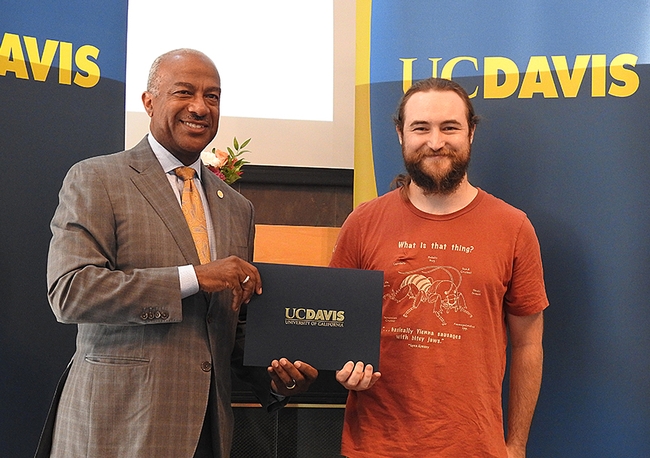