Have you looked at the ingredients in a bag of soil mix lately?  Some provide peat.  Some contain coir. Does it really make a difference in your container or your garden?

Peat is very slowly decomposing vegetation found in watery, anaerobic areas like bogs.  Anaerobic conditions slow the decomposition down to a crawl, and the peat slowly, gradually accumulates at a rate of 1/25th inch per year.  Peat has been harvested, dried, and used for heating since at least Roman times.  Peat moss is one form of peat that comes primarily from sphagnum moss.  Peat moss was only added to soil mixes starting in the 1960s.  Peat moss is known for holding water well, and for its lesser capacity for harboring weed seeds, herbicides, and root-borne pathogens.  It's great for plant starts and starting seeds.  It achieved popularity in the 1970s with soil manufacturers because it is lighter in weight, making soil mixes cheaper to ship.  Harvesting today involves loosening up the top inch or two of the bog and letting it dry out, then using vacuum harvesters to suck up the top ¼ inch of peat fibers.  The goal is to be as gentle in suctioning it up as possible as mechanical damage to the sphagnum peat moss fibers causes more dust and less water-holding capacity of the product.  While there are still lots of bogs/peatlands to obtain peat, the problem is that the plant matter that hasn't decomposed in the peat holds a large amount of carbon.  Peatlands store more carbon dioxide than any other ecosystem - essentially, they're carbon sinks.  If left alone, the carbon from the bog barely affects the atmosphere.  When peat is dug up/harvested or the bog is drained, the huge amount of released carbon adds to global warming. Bogs are also ecosystems.  The sphagnum moss in the bog acts as a sponge and filters the water coming in thus decreasing pollution and flooding and releasing the water it receives back into the ground.  The habitat also shelters tiny organisms and some a little bigger like turtles.

Coir is the straw-like fiber of a coconut.  Typically, it has been used to make ropes, floor mats, erosion-control mats, reptile bedding, and liners for hanging plants.  In tropical areas, the course fiber is added back into the soil to help loosen the soil.  Increasingly it is being added to soil mixes in place of peat.  Coir actually holds water better than peat moss and is easier to rehydrate than dried-out peat moss.  Maybe you have had the experience of trying to water a really dry plant grown mostly in peat moss, only to find the water runs down the inside edge of the container and the plant doesn't get its water.

There are 3 different kinds of coir packaging on the market: chunk or chips, brick, and pith (sometimes called coco peat).  Chunks hold water and still allow air pockets so these are good for container plants and gardens.  Bricks hold 5-7 times their weight in water when rehydrated and are used for seed starts and as an addition to container plant soil.  Depending on your brick's size, you might consider adding water to the brick in a wheelbarrow to accommodate the expansion.  Soak small bricks for at least 15 minutes and big bricks for at least an hour before using it.  Do not even consider trying to cut a brick in half – the brick will win.  Pith/peat is darker than peat moss, and holds water really well, to the point that a plant could get too much water if the product is used on its own.  Usually, this is an addition to a soil mix to prevent over-saturation.  When re-hydrated, pith/peat looks like a darker peat moss with pretty much the same texture.

Coir is weed-free, disease-free, and nutrient-free.  This last characteristic means that some fertilizer needs to be added when setting up seed starts.  Also, the coir's pH is slightly acidic (5.5-6.8), but not as acidic as peat (3.6-4.5).  (This is why cranberries do so well in peat bogs!)  Some recommend flushing out the potassium and chlorine salts in the product before using it for seed starts in particular.  Coir usually lasts a lot longer than peat moss, up to several years.

I don't know if coir is any more environmentally “friendly” than peat moss.  Coir comes from Sri Lanka and India where it is processed (sometimes with chemicals) for export before being sent to the US.  All that seems like it would be a big carbon footprint.

Finally, finding coir locally is not easy.  Recently at the plant nursery, I found bagged products that already had coir in the soil mix (and no peat moss).  I have one big brick of coir that is still wrapped that I bought at Ace in Davis.  I thought I could cut it up, but that was delusional.  I haven't been able to find a local plant retailer who sells chunk coir.  I‘m off to check the pet stores for chunk coir in the reptile supplies. 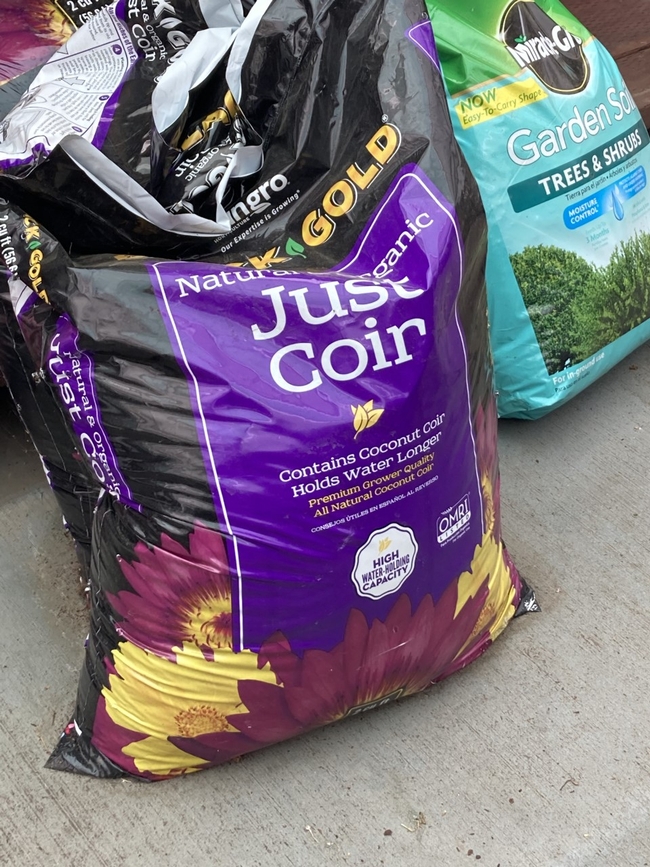