Is California facing a citrus apocalypse?

Asian citrus psyllid (ACP) (Diaphorina citri)  is an invasive pest of citrus first discovered in urban citrus in San Diego County California (CA) in 2008 . ACP presents a significant economic threat to CA's citrus industry because it vectors a bacterium, CLas, which causes a citrus-killing disease, huanglongbing (HLB). There is currently no cure for HLB which kills susceptible commercial citrus varieties in as little as 5 to 8 years. Since HLB was first discovered in Florida (FL) in 2005 (ACP was discovered in FL in 1998), citrus production in that state has fallen by 80% . In CA, the first case of HLB was detected in 2012 in Los Angeles County and infestations of ACP-CLas are largely restricted to urban-grown citrus in southern CA. Should HLB spread north into the San Joaquin Valley, where 75% of CA's citrus fruit is grown, it would jeopardize ~262,000 fruit-bearing acres, which generates over $3 billion annually and provides over 26,000 jobs. Because ACP-HLB poses such a significant threat to CA's citrus industry, ACP population suppression is key to slowing the spread of CLas into CA's commercial citrus groves.

In CA, ACP has been the target of a classical or introduction biological control program with two tiny parasitic wasps or parasitoids, Tamarixia radiata and Diaphorencyrtus aligarhensis, sourced from Pakistan, a part of the ACP's presumptive native range. CA's biocontrol program against ACP began with the release of T. radiata in December 2011, and in December 2014, D. aligarhensis was added to the release program with the intent of establishing a complementary set of parasitoids that specifically attack ACP nymphs. To date, >24 million parasitoids (T. radiata and D. aligarhensis combined) have been mass-produced and released at >19,500 sites in southern CA by the Applied Biocontrol Lab at UC Riverside and the California Department of Food and Agriculture. Of these two parasitoids, T. radiata established readily and rapidly spread into sites in CA where it was not released. Conversely, D. aligarhensis failed to establish following release in CA and mass production and release of this parasitoid was subsequently discontinued in 2019.

The ongoing biocontrol effort: So far, so good, but there is room for improvement

Since the inception of the ACP biocontrol program in CA in 2010 and the first release of T. radiata in 2011, densities of ACP infesting urban citrus have declined by ~70%. Two different multi-year and multi-site studies in urban citrus in southern California has clearly demonstrated that the proximate causes of these widespread population declines are due to natural enemies, specifically parasitism of ACP nymphs by T. radiata and predation by generalist predators, of which syrphid fly larvae are key predators of ACP nymphs . Consequently, reduced ACP densities may have slowed the spread of CLas in CA and subsequent development of HLB in infected citrus trees. However, the efficacy of natural enemies attacking ACP eggs and nymphs has been reduced by the presence of another invasive pest, the Argentine ant (AA) (Linepithema humile). Field work on ACP biocontrol in CA identified AA as a significant impediment to natural enemies. When present on trees, AA reduced the abundance of natural enemies interacting with ACP and suppressed the efficacy of T. radiata and syrphids by over 50 percent. When AA is excluded from ACP colonies, natural enemy abundance and attack rates increase significantly, particularly impacts by T. radiata and syrphid fly larvae.

Why are Argentine ants problematic, and what can we do about them?

AA aggressively protect >55% of ACP from natural enemies. In return for this protection, AA is rewarded with food, honeydew, which is a sugary waste product excreted by ACP nymphs. Consequently, AA protection exacerbates infestations of ACP and other honeydew producing pests in citrus (e.g., brown soft scale and mealybugs). This results in a positive feedback loop – more pests survive due to AA protection and their populations increase which in turn produces more food for AA which results in increasing ant populations. An undesirable outcome of these population increases is greater applications of insecticides to control sap sucking pests and AA. Ironically, sprays of contact insecticides targeting AA (and ACP) kill natural enemies needed for “free” pest control and this disrupts IPM programs which aim to reduce insecticide use.

To ameliorate this problem of increased insecticide use, biocontrol ACP (and other sap sucking pests) can be enhanced through three management practices: (1) monitoring AA activity with infra-red sensors to determine when ants have reached densities that need controlling, (2) controlling AA with highly targeted applications of ultra-low concentrations (i.e., 0.0001%) of insecticide delivered to foraging inside of biodegradable hydrogel beads that are infused with 25% sucrose water and insecticide, and (3) floral resources that provide food and shelter to natural enemies, especially hover flies, that attack ACP nymphs. This three-pronged management approach for controlling AA and the pests ants protect (e.g., ACP) is undergoing field evaluation in commercial citrus orchards in southern California. The outcomes of these large, replicated field trials will be discussed in an upcoming article in Topics in Subtropics: “Maximizing IPM of Argentine ant and sap sucking pests with biodegradable hydrogels, infra-red sensors, and cover crops in commercial citrus orchards.” 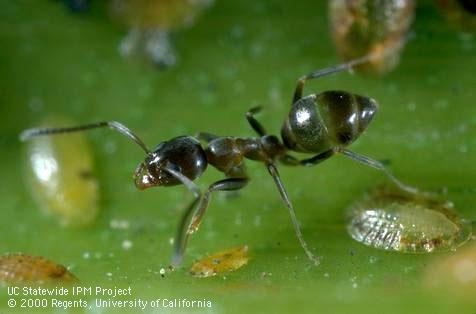