Close-up of a red flameskimmer, Libellula saturata, photographed in a Vacaville yard. (Photo by Kathy Keatley Garvey)
If you dragonflies fascinate you, and you wish to know more about them, be sure to attend the Bohart Museum of Entomology open house at UC Davis on Sunday afternoon, Nov. 6, on "Dragonflies Rule!"

The open house, free and family friendly, set from 1 to 4 p.m. in Room 1124 of the Academic Surge Building. 455 Crocker Lane, and will feature noted dragonfly expert Rosser Garrison of Sacramento, widely recognized as one of the current leading experts of the taxonomy of New World Odonata.

Dragonflies were here before the dinosaurs. “Dragonfly relatives existed before the onset of the dinosaurs---Triassic Period, 250 to 200 million years ago,” Garrison says. Some of these gigantic dragonfly-like insects had wingspans of about three feet.

Garrison, who retired in 2017 as a senior insect biosystematist in the California Department of Food and Agriculture's Plant Pest Diagnostics Branch, Sacramento, continues his research on dragonflies. He has collected more than 50,000 dragonflies specimens throughout the world. His collection now contains more than half of all the known species of the world.

Garrison, who holds a doctorate (1974) from UC Berkeley, served as the senior biologist/entomologist for Los Angeles County before becoming a senior insect biosystematist with the Plant Pest Diagnostics Branch, California Department of Food and Agriculture (CDFA), in Sacramento, where he identified orthopteroid, heteropteroid, other groups of invertebrates including mollusks.  He retired from CDFA in August 2017 and continues working on Odonata at his home in the Pocket area of Sacramento. Rosser Garrison, noted dragonfly expert
He developed an interest in insects at age 3. Soon dragonflies and (later) damselflies captivated his interest "due to their overall beauty and fascinating biology."

"I continued to collect and maintain a collection of insects from an early age and later enjoyed identifying them using the third edition of the classic entomology text An Introduction to the Study of Insects by D.J. Borror and D. Delong," he said. His main interest is the systematics of Odonata with a strong emphasis on the Neotropical fauna.

Garrison's publications include descriptions of more than 75 new species and six new genera of Odonata. In the Americas, he has done entomological field work in the United States, Mexico, Costa Rica, Panama, Guyana, French Guiana, Venezuela, Ecuador, Peru, Brazil, Argentina and Chile. He has also collected dragonflies in Australia, Papua New Guinea, China, Thailand, Namibia and Iran.  One genus and 10 species of Odonates are named after him.

Bohart associate Greg Kareofelas said that other local dragonfly specialists and students "will be there to answer all manner of questions concerning dragonflies and damselflies." They will include Christopher Beatty, visiting scholar, Program for Conservation Genomics, Stanford University; UC Davis alumnus Andy Rehn, ecologist at the California Department of Fish and Wildlife; and UC Davis doctoral student Christofer Brothers, who studies dragonflies.

"Bring photos you have taken to have identifications made," Kareofelas says.  An arts and crafts activity for all ages is also planned.

Throughout the afternoon, the Lepidoptera (butterflies and moths), curated by entomologist Jeff Smith, will be open, as will the live insect display showcasing Madagascar hissing cockroaches, stick insects and tarantulas. Visitors are invited to touch or "pet" the cockroaches and stick insects and take selfies.

The Bohart Museum, founded in 1946, is directed by Lynn Kimsey, UC Davis distinguished professor of entomology. It is the global home of eight million insect specimens, as well as the live "petting zoo" and an insect-themed gift shop stocked with t-shirts, hoodies, books, posters, jewelry, collecting equipment and more. Named for UC Davis professor and noted entomologist Richard Bohart, it is open to the public from 8 a.m. to noon, and 1 to 5 p.m., Mondays through Thursdays. 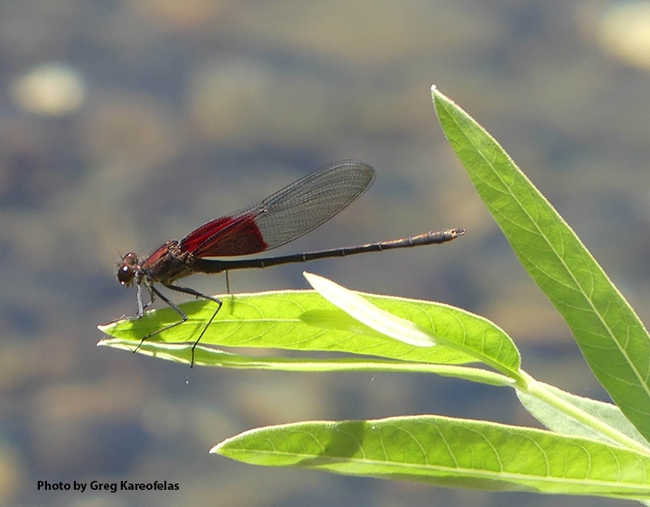 This is an American rubyspot, Hetaerina americana, photographed at a small stream in the inner Coast Range. (Photo by Greg Kareofelas) 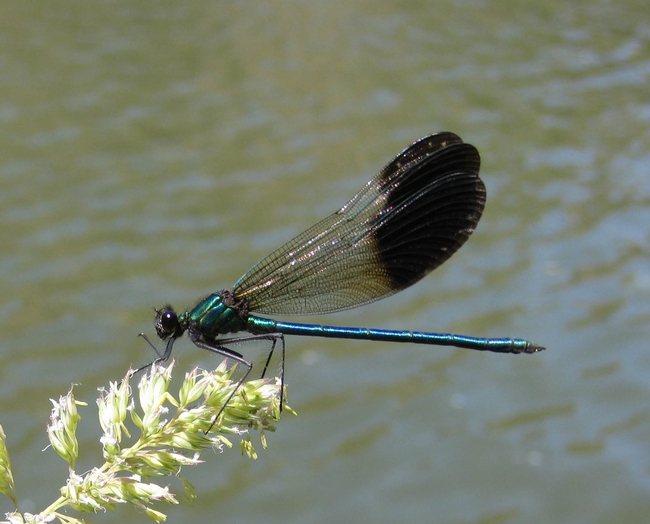 This is a river jewelwing, Calopteryx aequabilis, photographed at the Klamath River. (Photo by Greg Kareofelas) 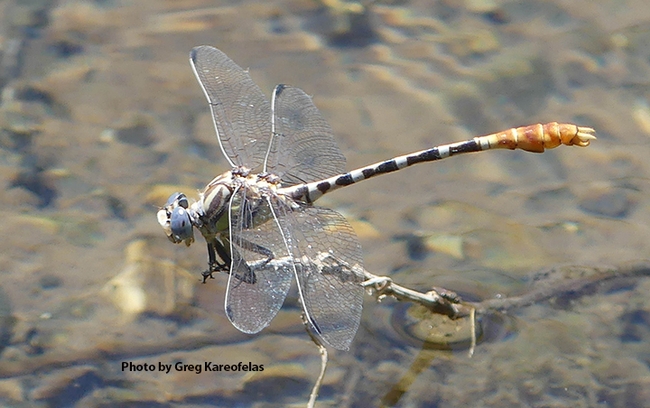 This is a white-belted ringtail, Erpetogomphus compositus, photographed in a small stream in the inner Coast Range. (Photo by Greg Kareofelas) 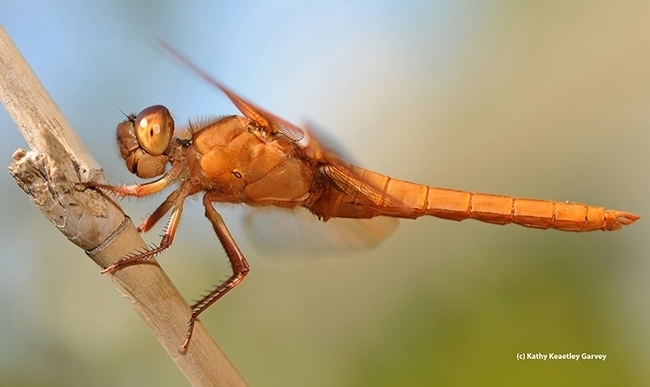 This is a red flameskimmer, Libellula saturata, photographed in a Vacaville yard. (Photo by Kathy Keatley Garvey) 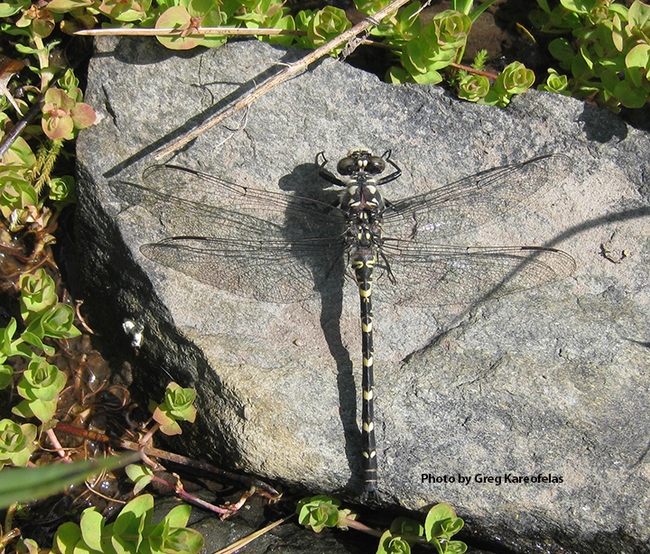