The occasion: the college's Award of Distinction dinner and ceremony, held Nov. 3 in the Activities and Recreation Center Ballroom.

Page, considered by his peers as the world's leading honey bee geneticist, traces his "bee biology roots" to UC Davis. He drew a standing ovation.

Page received his doctorate in entomology in 1980 from UC Davis, studying with Harry H. Laidlaw Jr., and went on to join the UC Davis Department of Entomology faculty in 1989 and chair the department from 1999 to 2004. He then transitioned to emeritus and was recruited by Arizona State University (ASU)  to be the founding director of its School of Life Sciences. His career at ASU led to a series of top-level administrative roles: from founding director of the School of Life Sciences (2004-2010) to vice provost and dean, College of Liberal Arts and Sciences (2011-2013) and then to University Provost, 2014-2015.

"Rob is a pioneering researcher in the field of evolutionary genetics and social behavior of honey bees, and a highly respected and quoted author, teacher and former administrator,” wrote nominator Steve Nadler, professor and chair of the UC Davis Department of Entomology and Nematology. One of Rob Page's books, "The Art of the Bee."
“One of Dr. Page's most salient contributions to science was to construct the first genomic map of the honey bee, which sparked a variety of pioneering contributions not only to insect biology but to genetics at large,” Nadler pointed out. “It was the first genetic map of any social insect. He was the first to demonstrate that a significant amount of observed behavioral variation among honey bee workers is due to genotypic variation. In the 1990s, he and his students and colleagues isolated, characterized and validated the complementary sex determination gene of the honey bee; considered the most important paper yet published about the genetics of Hymenoptera. The journal Cell featured their work on its cover. In subsequent studies, he and his team published further research into the regulation of honey bee foraging, defensive and alarm behavior.”

While at UC Davis, Page worked closely with Laidlaw, "the father of honey bee genetics." Together they published many significant research papers and the landmark book, “Queen Rearing and Bee Breeding” (Wicwas Press, 1998), considered the most important resource book for honey bee genetics, breeding, and queen rearing.

For 24 years, from 1989 to 2015, Page maintained a UC Davis honey bee-breeding program, managed by bee breeder-geneticist Kim Fondrk. Their contributions include discovering a link between social behavior and maternal traits in bees. Their work was featured in a cover story in the journal Nature. In all, Nature featured his work on four covers from work mostly done at UC Davis.

Since his retirement from UC Davis, Page has published 65 research papers, eight major reviews and two scholarly books, many using his UC Davis affiliation. He authored “The Spirit of the Hive: The Mechanisms of Social Evolution” (Harvard University Press, 2013) and the “Art of the Bee: Shaping the Environment from Landscapes to Societies” (Oxford University Press, 2020).

Now residing near Davis, Page continues to focus his research on honey bee behavior and population genetics, particularly the evolution of complex social behavior. His continuing academic activities bring credit to bee biology and UC Davis, Nadler said. “His large number of publications and citations continue to be an important component of the high national rating of our entomology department.”

To date, Page has published more than 250 research papers and articles, edited or authored five books, and is listed as a “highly-cited author” by the ISI Web of Knowledge, representing the top 1/2 of one percent of publishing scientists.

Page continues to work closely with UC Davis professors and students, offering advice, helping them with grants, and editing manuscripts. A few years ago, he held an international workshop at the Laidlaw facility. He teaches courses (including “The Social Contract: from Rousseau to the Honey Bee,” and “The Song of the Queen: Thrilling Tales of Honey Bee Mating Behavior”) for the UC Davis Osher Lifelong Learning Institute (OLLI).

“Not surprisingly, Dr. Page humbly considers his most far-reaching and important accomplishment, the success of his mentees, including at least 25 graduate students and postdocs who are now faculty members at leading research institutions around the world,” Nadler wrote. “He also built two modern apicultural labs (in Ohio and Arizona), major legacies that are centers of honey bee research and training. He has trained many hundreds of beekeepers. His public service now extends to working as a Fellow with the California Academy of Sciences.”

Others honored at the CA&ES Award of Distinction ceremony were Alumnus of the Year, Marko Zaninovich (Class of 1964); Distinguished Friends of the College, William 'Bill' Patterson and his wife, Doris Brown,  for their contributions and support of the Bohart Museum of Entomology; Exceptional Faculty Award: Daniel Sumner, the Frank H. Buck, Jr. Distinguished Professor of Agricultural and Resource Economics; and Exceptional Staff Award, Shannon Tanguay, budget fiscal officer with CA&ES. (See CA&ES website) 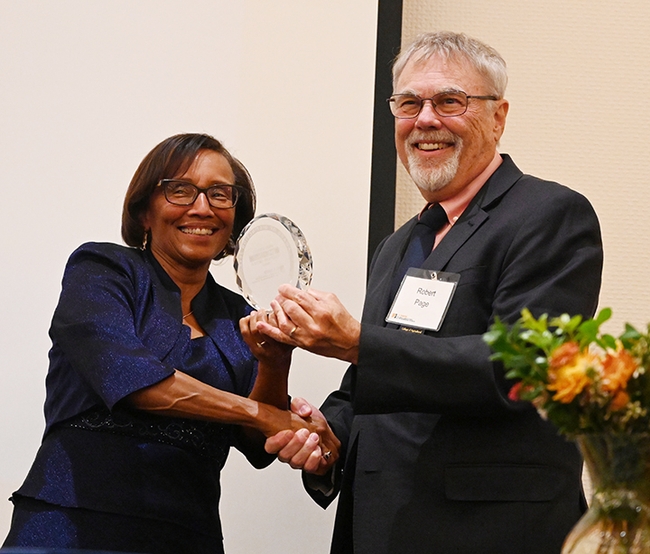 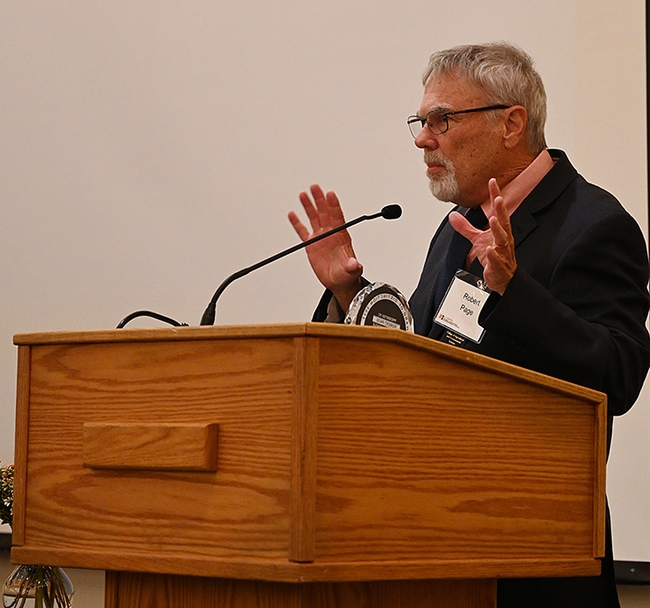 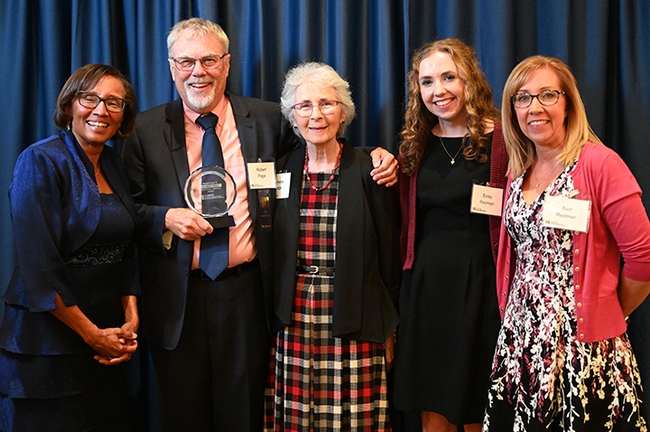 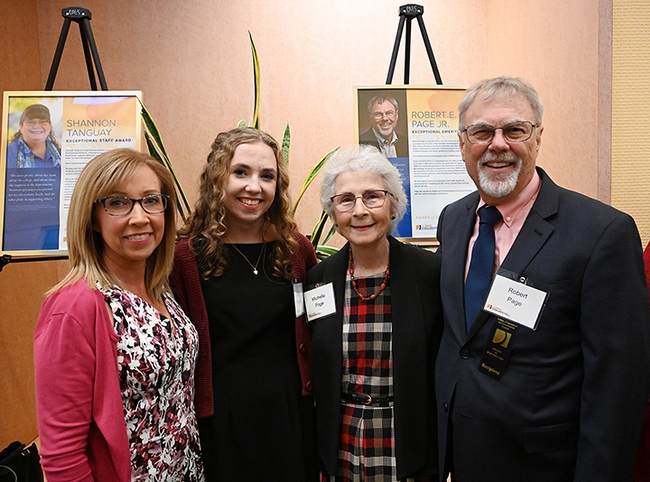 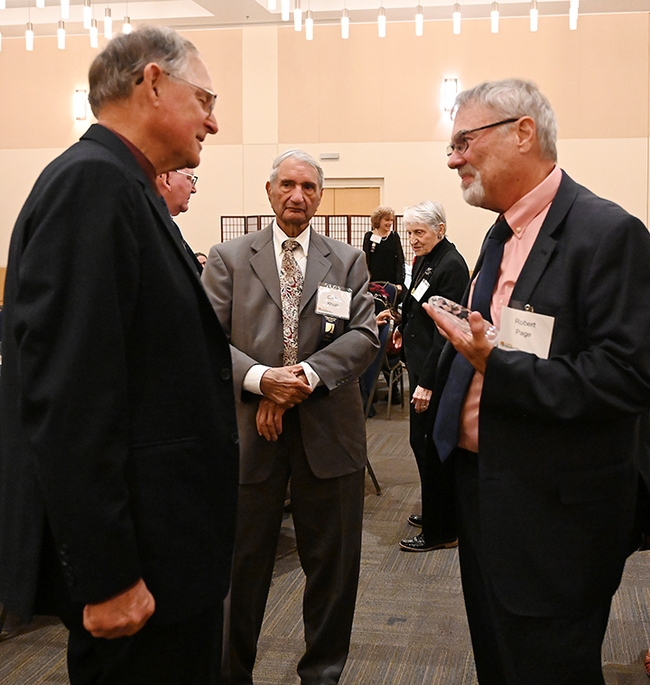