Who takes images of flies? Raise your hand! No, not the hand with the flyswatter.

Well, almost anything is fair game for my camera.

I am humbled to learn that my image of a golden dung fly won the Entomological Society of America (ESA) medal for "Best Image by an ESA Member" in the 64th annual International Insect Salon competition.

I captured the image of the fly, Scathophaga stercoraria, perched on a lavender stem in our family's pollinator garden in Vacaville and titled it “Checking You Out.”  Scathophaga play an important role in the natural decomposition of dung.

Two other images that I submitted also gained acceptances.  One was of a crab spider nailing a katydid (Did or Didn't I?), and the other of a pollen-covered honey bee (Eureka! I Found It!). 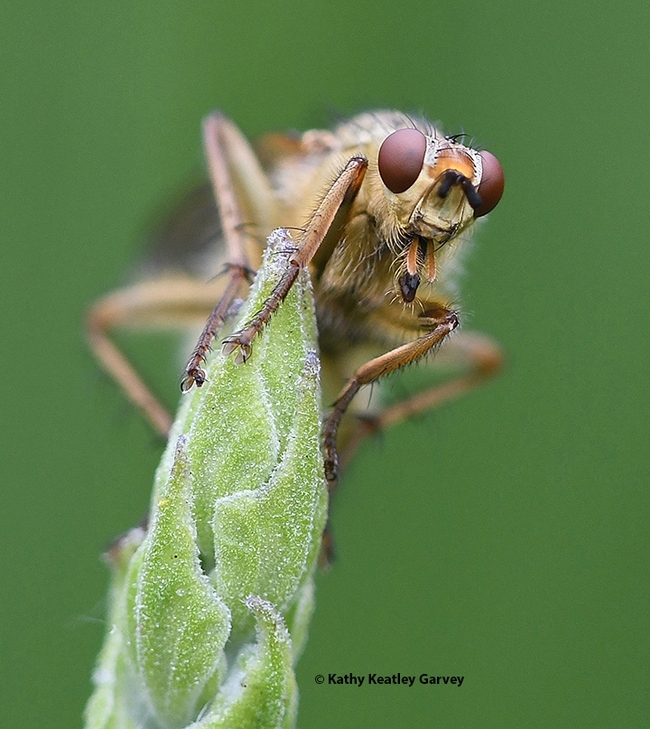 This image of a golden dung fly, titled "Checking You Out," scored the ESA Medal in the 2022 International Insect Salon. It was among images showcased at the ESA meeting in British Columbia. (Photo by Kathy Keatley Garvey)
Focus Area Tags: Environment, Innovation, Natural Resources, Yard & Garden
Tags: Entomological Society of America (119), ESA (19), International Insect Salon (2), Kathy Keatley Garvey (31), UC Davis Department of Entomology and Nematology (633)
Comments: 5
Comments:
by Rachael F Long
on November 15, 2022 at 8:21 AM
Congratulations! Love your photos!
by Karen Partoyan-Holleran
on November 15, 2022 at 8:50 AM
Congrat Kathy! Great shot. Keep on sharing your beautiful shots with us!! Taking pics of insects is definitely higher level, I am impressed!
by Yvonne Rasmussen
on November 15, 2022 at 8:53 AM
Congratulations! So glad you got recognition for your excellent photos. They are always a pleasure to see and to read their story. Love your blog, and thank you for sharing. Yvonne
by Lee Miller
on November 15, 2022 at 1:53 PM
Congratulations and well deserved. I always enjoy your great photos.
by Gayna Lamb-Bang
on November 18, 2022 at 7:33 AM
Very well deserved! Congratulations!
Leave a Reply: