Interesting take on resolving labor shortages in this morning's Wall Street Journal in an article written by Miho Inada.

Very much like our strawberry industry, Japan has been experiencing a real worker shortage but for the time being at least applying a novel solution to it. With numbers of foreign workers not sufficient to make up for the shortfall since the Covid immigration clampdown and a weaker Yen that makes income earned in Japan less attractive for foreigners, the country has turned to its own public servants to help out.  People who work desk jobs at the government office are now being encouraged, and in some cases being drafted, to work out in the fields bringing in apples, lettuce and indeed strawberries to make up for the shortage in labor.  Essentially moonlighting, they get out mornings at 5 am before going to their other job, or pitch in on weekends.

It's not easy for those drafted into the farm work, but these public servants hang in there.  One interviewed says it's not something he would do every day, but still it's nice to get outside.  Another shares that it was quite tough for his body to get accustomed to the physical work, and subsequently made him drowsy when doing paperwork when he got back to his regular job.

While this dragooning of public servants and local officials for work in the fields is seen by some as the "next step" to protect local producers, many economists still maintain that the only long term solution to Japan's demographic woes and the resulting labor shortages being described here is more immigration.  And indeed, numbers of foreign nationals living in Japan have crept up over the last decade from 700,000 to 1.7 million currently.

All in all, it's interesting to see how another country is dealing with its declining availability of labor.  They certainly aren't just standing there, wringing their hands. 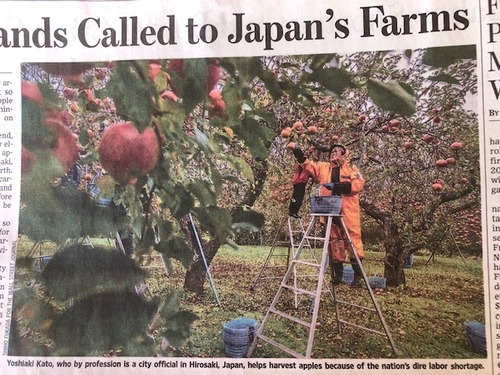 Apple harvest in Japan; the person on the top rung in the background would raise eyebrows at OSHA I think. Photo by Shiho Fukuda.
Comments: 2
Comments:
by Leah Fronk
on November 30, 2022 at 12:28 PM
Very interesting solution, at least temporarily. Thanks for sharing
by Mark Bolda
on December 10, 2022 at 9:14 AM
The one caveat that comes up of course when using public servants is of course fairness to all. It is not inconceivable that certain growers would capitalize on political connections to garner more help than their neighbors and gain advantage.

In turn, one would have to construct a system to ensure equitable distribution of assistance from public servants when considering sending out them to the fields. Probably something along the lines of proportion of produce to be harvested, or maybe ability for the growers to pay for their own workers.
Leave a Reply: