"After two thousand miles and eight days, I returned to Washington State after surveying Monarch populations at 24 coastal California overwintering sites stretching from Pismo Beach to Bolinas," he related in an email Sunday and earlier posted on his Facebook page, Monarch Butterflies in the Pacific Northwest.

"As detailed previously, I found three tagged Monarchs (Pismo Beach, Cambria, Santa Cruz) that originated in southern Oregon. I also located or learned of three additional tags in Santa Cruz that have not yet been viewed sufficiently well to get details of serial numbers. If you are visiting Lighthouse Field or Natural Bridges in Santa Cruz over the coming weeks, please watch for these!"

"Populations at the overwintering sites I visited ranged from 100 to 24,000 with sites around Pismo, Cayucos and Cambria having the largest numbers. In total, I saw an estimated 107,650 Monarchs at the 24 sites. Comparing my estimates with the Thanksgiving Counts (TGC) made at these sites in 2021 indicates an almost 80% increase. For example, for nine sites in San Luis Obispo County, I estimated a total of 92,810 butterflies last week, compared to 52,212 in the 2021 TGC. Similarly, in the Santa Cruz/San Francisco area my estimate of 34,310 butterflies at nine sites is almost double the 2021 TGC number for these sites (17,556)."

Pismo Beach, Cayucos and Cambria are all located in San Luis Obispo County, a county located along the state's central coast.

The WSU entomologist singled out for special mention the overwintering population in Cambria; longtime monarch advocate Paul Cherubini alerted him to the site.  "This new site, which does not appear on the official list of overwintering sites, is home this November to 15,000 butterflies!" James noted. This monarch paused for some flight fuel (Mexican sunflower, Tithonia rotundifola) as it passed through Vacaville, Calif. on Oct. 24, 2022, on its way to an overwintering site along the coast. (Photo by Kathy Keatley Garvey)
"While I don't think we will see an 80% increase in the overall 2021 Thanksgiving Count of 247,246 (which would place the 2022 population at more than 445,000), I do think my estimates suggest the overwintering population for 2022 could exceed 300,000. If this happened, it would only be the third time since 1997 that the population has exceeded 300,000."

"Regardless of the final numbers, there is little doubt that the western Monarch had a great breeding season in 2022."

Check out his spectacular images of Danaus plexippus.

James, a WMA board member, will be among the keynote speakers from four countries. The event, open to all interested persons, is billed as "an exchange of ideas from across the Western States, Tribal Lands, Mexico, Canada and Australia-all with an interest in our western monarch population!  Expand your knowledge and make connections with other Monarch enthusiasts, researchers, and conservation organizations."

WMA officials say it's time "for everyone involved in conservation and restoration of the Western Monarch to share, network, and learn what others are doing.  Then go forth with a better understanding of how to improve what we each do in our own arena of interest and geographic areas.  Let's work together to help the precious and amazing Western Monarch Butterfly."

As they point out, "our migrating Western Monarch Butterflies do not stop at state or international borders; nor should our efforts to restore them."

Yes, indeed. Monarchs know no borders and neither should we. 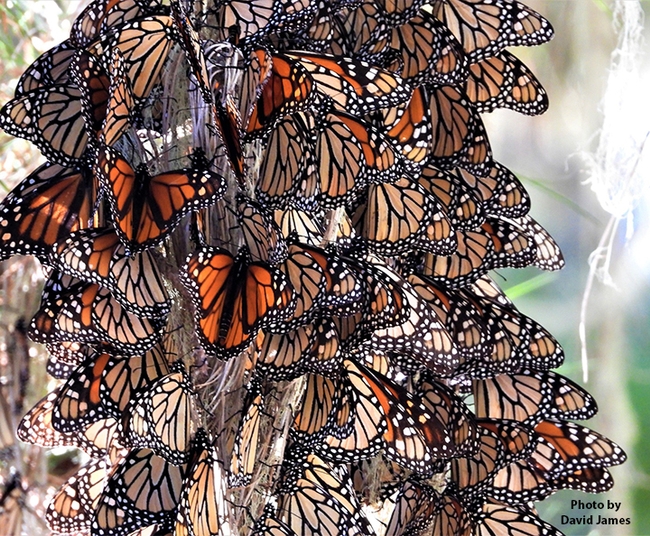 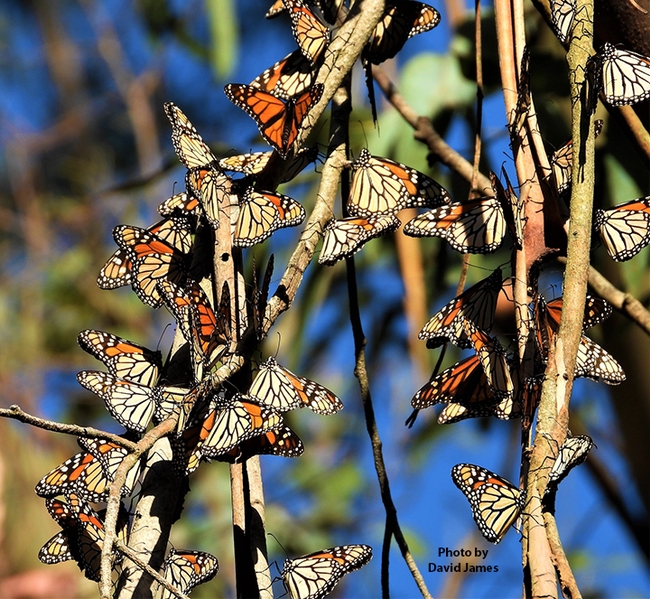 A cluster of monarchs at an overwintering site in Bolinas, Calif. (Photo by David James, Washington State University entomologist) 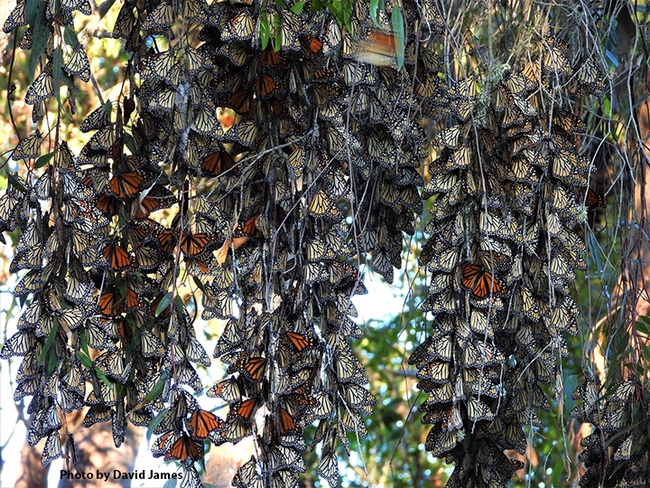