UC Davis distinguished professor Diane Ullman (left), both an artist and an entomologist, converses with Helene Dillard, dean of the UC Davis College of Agricultural and Environmental Sciences. (Photo by Jenella Loye)
What an incredible art show that two UC Davis Department of Entomology and Nematology faculty recently hosted in the Labudio (lab+studio) of the UC Davis Environmental Horticulture Building, 200 Arboretum Drive.

Among those attending: Helene Dillard, dean of the UC Davis College of Agricultural and Environmental Sciences (CA&ES).

Meineke explained the gist of it: "The students were each assigned an insect species in decline or moving about the planet and becoming invasive in new habitats. The insects students were assigned are among those most impacted by humans, and students were given an opportunity to re-envision how people might interact more gently and intentionally with insects, our small, yet consequential co-inhabitants." Emily Meineke, UC Davis urban landscape entomologist
"We are so proud of how the students interacted with this topic," Meineke said. "They were charged with researching their insects and turning that research into designs that could be screen printed on watercolor paper, ceramic tiles to be installed in Briggs 122, and fabric. Their designs are nothing short of spectacular!"

Ullman, a noted artist and entomologist, wasn't an "official co-teacher," Meineke said, but she "helped immensely."

A celebrated teacher, artist and researcher, Ullman is the founder and co-director of the UC Davis Art/Science Fusion Program, established in 2016.  Highly honored by her peers, Ullman received the Entomological Society of America (ESA) National Excellence in Teaching Award in 2014 and the UC Davis Academic Senate's Distinguished Teaching Award for undergraduate teaching in 2022. She is a fellow of both the American Association for the Advancement of Science (2014) and the ESA (2011); former chair of the Department of Entomology (2004-05); and former associate dean for undergraduate academic programs for CA&ES (2005-2014).

Many of those attending brought a t-shirt to received a free screen print of one of the designs.

"We were kept busy," Ullman related.

Meineke, recently named one of the 12 UC Davis recipients of the prestigious Hellman Fellowships, an annual program supporting the research of early-career faculty, was among the scholars and artists who helped spearhead the newly created Harvard Museum of Natural History's “In Search of Thoreau's Flowers: An Exploration of Change and Loss." It's hailed as an examination of the natural world and climate change at the intersections of science, art and history.  Meineke helped launch the project in 2017 when she was a postdoctoral fellow at the Harvard University Herbaria. The 648 plant specimens that Henry David Thoreau donated to the museum form the foundation of the exhibit. It opened to the public May 14.

UC Davis entomologist Jenella Loye of Carroll-Loye Biological Research shared some of her images with us. She and husband, Scott Carroll, are research associates with the Department of Entomology and Nematology. 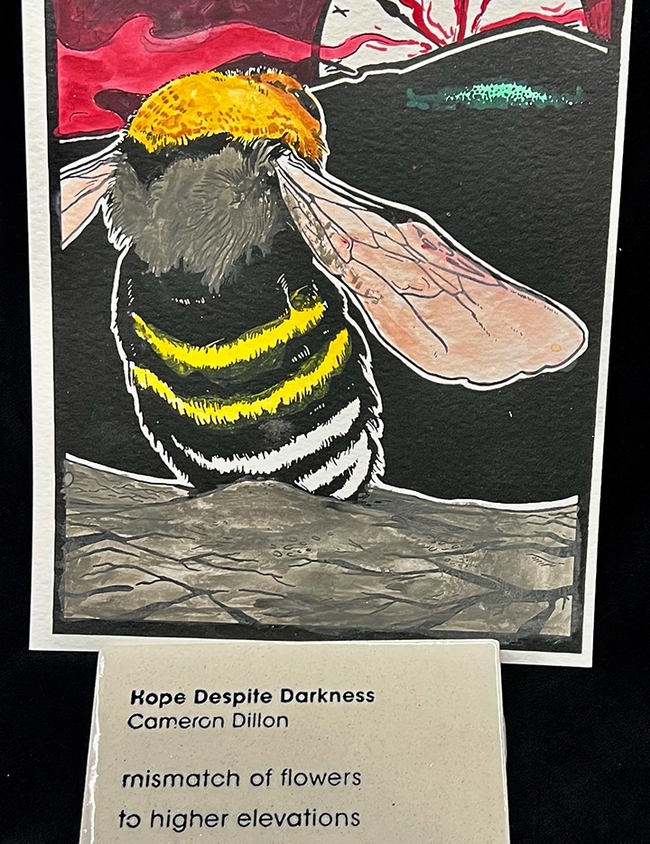 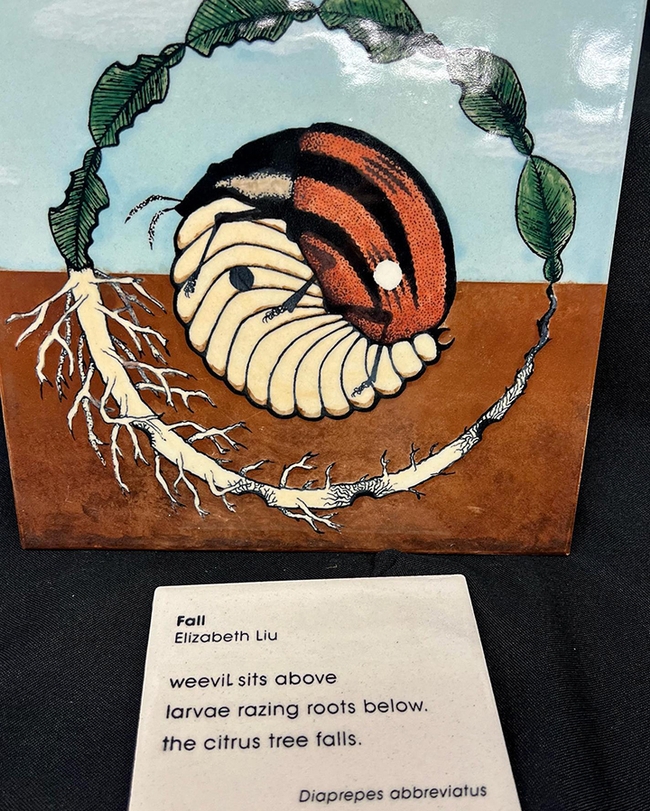 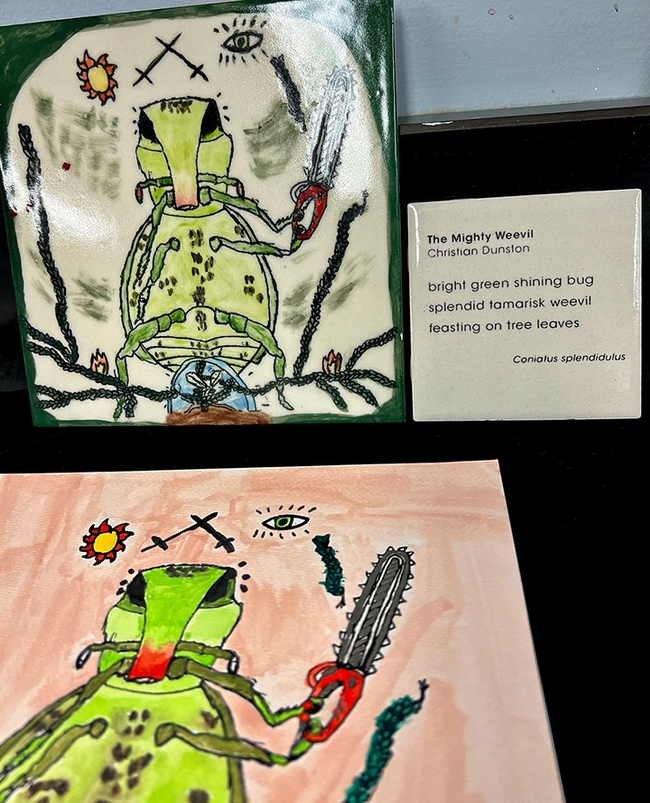 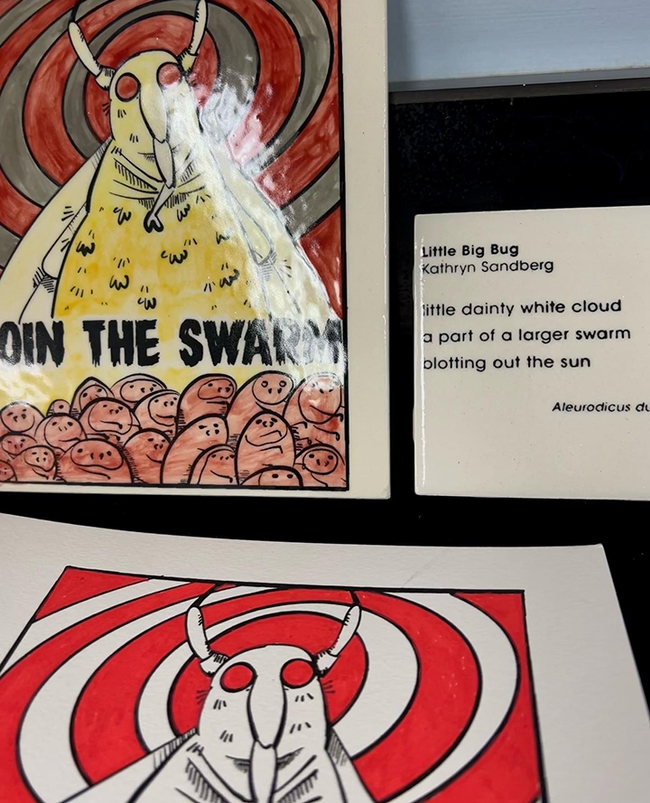 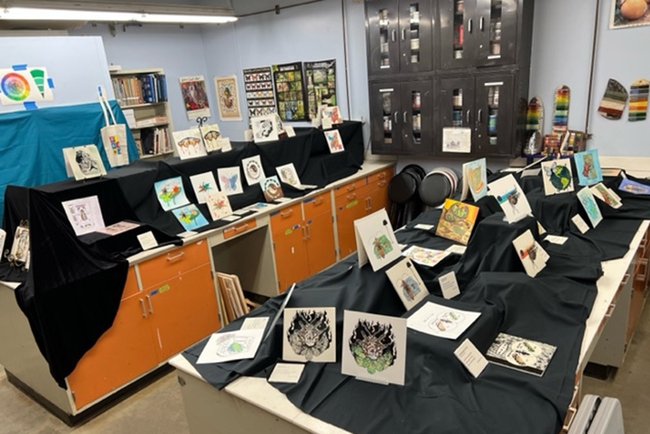 This display of art, "Insects in the Anthropocene," greeted guests at the recent art show in the Labudio (lab+studio) of the UC Davis Environmental Horticulture Building. (Photo by Diane Ullman) 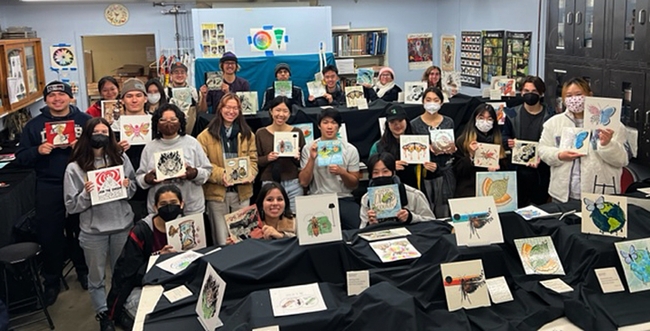