The hot weather of this past week has unsurprisingly caused a certain amount of sunscald on caneberry fruit.   As can be seen in the photos below, sunscald manifests itself as a white to brown discoloration of one or more of druplets on mature and immature fruit.

The current round of sunscald has accompanied the hot spell of the past three days, and this is consistent with what we have witnessed in the past.  Any time on the Central Coast that we go from fairly steady temperatures in of 70oF to suddenly around 90oF with an absence of fog, we experience significant increases in sunscald.

While it may seem that the sunscald of raspberry fruit is caused by simply very hot weather, it is a little more complicated than that and it is actually radiation from the sun which is causing the problem.  Apparently, this radiation causes enough physiological changes within the fruit to discolor it, but not causing it to become necrotic right away.  Humid air, which in our area tends to be cool (think fog), scatters and absorbs radiation from the sun, while hot air tends not to carry too much of the radiation scattering moisture and therefore is not doing as much to scatter it and prevent it from damaging fruit druplets.  Windy weather is even worse, since it is moving the moisture out and away from the canopy.

There are several solutions to this problem.  One, the least practical, is to introduce moisture into the canopy via overhead irrigation.  It is best of course to do this in the early morning, to ensure that the flowers and fruit are dry by the evening.  Another is to use some form of shadecloth to cover the plants, which many Pajaro Valley growers are already doing to a certain extent in the form of macro-tunnels, where very little sunscald has been observed.   Finally, it is known that some varieties are more susceptible to sunscald than others, so if one is consistently having problems with sunscald, switching varieties might be a good solution. 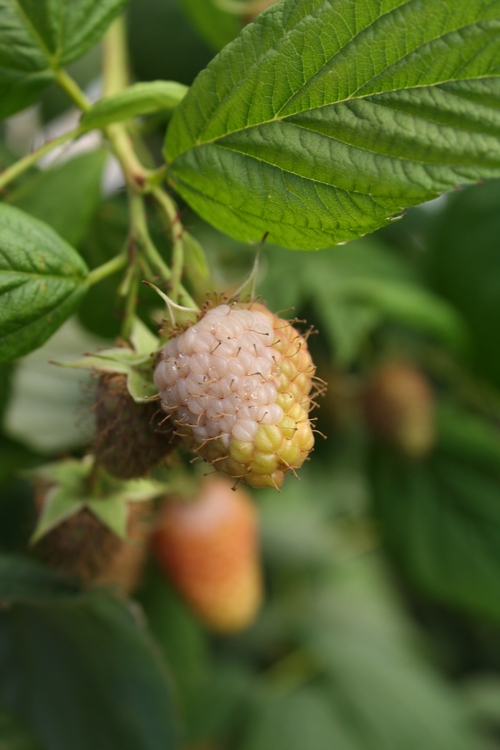 Raspberry sunscald, note how affected area is delineated from non-affected. 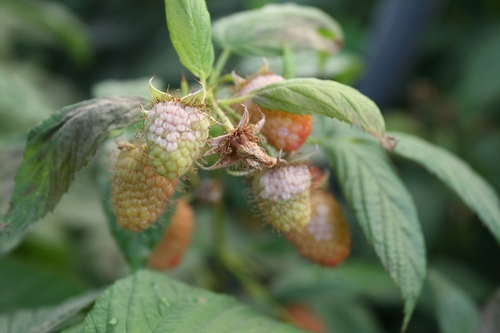 Multitude of immature fruit affected. Interestingly, affected areas are not all directly exposed to the sun.
Tags: raspberry (24), sunscald (1)
Comments: 2
Comments:
by Rufayda
on April 28, 2020 at 8:59 PM
Hello, can sun scalding also cause offwhite lines on the tip of raspberries? I’m unable to send a photo with this comment, but they basically look like tiny scratch marks, which are predominantly found on the tip, or then sometimes individual lines on the ring area of the berry. At first I assumed it was cladosporium, but the mold is usually black, and this is not.
by Mark Bolda
on May 6, 2020 at 10:53 AM
Hi Rufayda, I think I know what you are talking about and have pictures of it. Send me an email mpbolda@ucanr.edu and I'll send the picture of what I am thinking about.
We haven't done the complete work up on it, but I think the problem I see here that looks like that with offwhite lines at the tips are caused by thrips.
Leave a Reply: