Lynn S. Kimsey is an entomologist, and has been one for most of her life. It's an interesting piece. Kimsey, director of the Bohart Museum of Entomology and professor of entomology at UC Davis, traces her interest in entomology to age 5, when she received her first butterfly net.

"I've pretty much had a burning passion for insects ever since, except for a brief foray into marine biology as an undergraduate," she told LiveScience.

Kimsey recently drew international attention with her discovery of gigantic "warrior wasps" on the Indonesian island of Sulawesi.(The male measures about two-and-a-half-inches long, Kimsey says. “Its jaws are so large that they wrap up either side of the head when closed. When the jaws are open they are actually longer than the male’s front legs.)

And what is "the most important characteristic a researcher must demonstrate in order to be an effective researcher?"

"A burning curiosity and the need to know."

Kimsey is also quick to point out the societal benefits of her research.  "Understanding insects, where they occur and the ecosystem services they provide, is critical for our how important insects are to us. They are our principal competitors — they feed on us and our animals, they make us sick and yet provide critical pollination, recycling and nutritional services."

We're glad to see LiveScience singling out scientists for a "behind-the-scenes" look. It humanizes the scientists who do such intriguing research.

We remember when apiculturist Marla Spivak, a 2010 MacArthur Foundation and Distinguished McKnight Professor and Extension entomologist with the University of Minnesota, shared some of her thoughts with LiveScience.

When asked "If you could only rescue one thing from your burning office or lab, what would it be?" Spivak answered "My students." Then, showing a trademark sense of humor, she added "If there were bees in the lab, I would grab them, too."

Kimsey, too, has a honed sense of humor. The Bohart Museum is the home of a global collection of seven million insect specimens and what she calls "the live petting zoo"--insects you can touch and handle. They include Madagascar hissing cockroaches, a rose-haired taranatula, and walking sticks.

We thought she might gleefully answer "walking sticks" when she was asked what she would RUN out of burning building with, but no.

Kimsey replied: "My external hard drive: My entire research life, my brain, is in that drive." 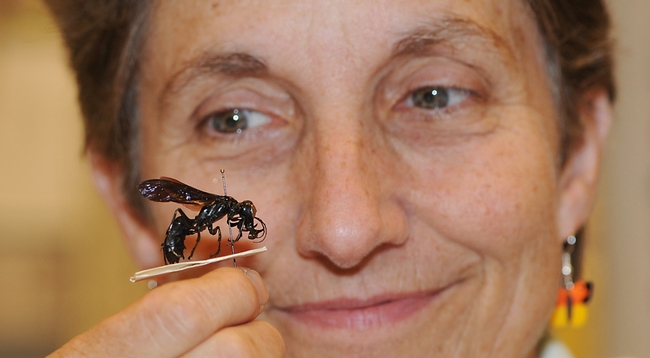