Coachella Valley citrus growers and industry researchers met yesterday to discuss an attack against the Asian citrus psyllid, an insect lethal to citrus crops that has recently been found in California, according to a story in today's Desert Sun.

The California Department of Food and Agriculture announced late last week that a single Asian citrus psyllid was detected in San Diego County, which set in motion a collaborative effort that includes UC Cooperative Extension to protect the state's citrus industry.

Asian citrus psyllid transmits citrus greening disease, which is already endemic in Florida and has wreaked havoc for citrus industries in Asia, India, the Middle East, South and Central America.

According to an article in Western Farm Press, the Citrus Research Board and representatives from the USDA, CDFA, UC and the San Diego County Agricultural Commissioner’s office met with citrus growers and other citrus industry leaders immediately after the psyllid find. They discussed the discovery and the threat it poses, as well as the industry and regulators’ plan of action.

The Citrus Research Board plans another meeting Sept. 25 in San Diego. 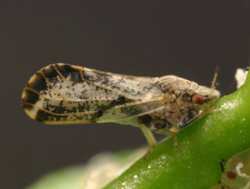 Asian citrus psyllid
Tags: Asian citrus psyllid (48), citrus (14), exotic pest (40)
Comments: 2
Comments:
by Alexis Linn
on September 8, 2008 at 1:17 PM
It is completely devastating that the Asain pysllid has now been found in San Diego. California's exposure to this psyllid can result in a enormous loss and a potentially ending California's citrus production.
by Christopher Neuschafer
on September 11, 2008 at 11:01 AM
To add some depth to this story, the California Department of Food and Agriculture released a video yesterday on their youtube account (search: "Excluding a serious citrus tree pest") detailing the risk to California citrus based on this little "pest". It shows in detail the larval stages and the process used to eliminate them.
Leave a Reply: