Unfortunately, we start out the year with some concerns. We want to alert growers that early in 2012 we are seeing transplant decline and dieback in various fields in the Watsonville-Salinas production district. As pictured below (Photo 1), this problem can be quite severe and characteristically affects a large percentage of the field. From what we have seen and heard from others, along with samples submitted to the UCCE disease diagnostics lab in Salinas, this decline is widespread and seems to be particularly acute in organic fields.

On closer inspection (Photos 2 and 3 below), the symptoms closely resemble those caused by high salt levels. Margins of the oldest leaves show the initial symptoms and become brown, dry, and burned. As the condition worsens, the entire leaf will wither and die. Eventually all leaves can turn brown and the transplant can actually die (Photo 4 below). Generally the internal crown tissue is sound and intact; however, as the plants continue to decline, some of these crowns turn brown and become discolored.

These transplant decline and death symptoms superficially resemble symptoms caused by Colletotrichum (anthracnose) and Phytophthora (crown and root rot). However, lab tests thus far have failed to recover any pathogen associated with these plants. In addition, the widespread (up to 75%, in some cases) incidence of declining transplants argues against a biotic agent as the cause of this problem. The problem appears to affect all cultivars and is not restricted to any one source of transplants.

What is causing all of this damage? For fields we have investigated, the water EC (electrical conductivity, a measure of salinity) is normal and the soil is not excessively saline and has never exhibited these symptoms before. Again, dieback symptoms are occurring across varieties, across nurseries, and across blocks. There is some indication that damage is more severe in wetter areas.

The exceptionally dry weather of the past five to six weeks may be playing a significant role in this development. The total lack of rain has forced strawberry growers to irrigate often, and in many cases this has been solely through the drip tape. While this amount of water is sufficient for plant needs, we should take into account that the beds are therefore not being leached by the abundant amounts of water that an inch or two of rain can bring all the while that the bands of pre-plant fertilizer amendments are accumulating salts around them and mineralizing into what can be predominantly ammonium forms of nitrogen in cooler soils. High levels of ammonium are associated with toxicity in plants, as are the accumulated salts.

So this leads us to believe that the leaf burn and transplant dieback being seen up and down our district is being caused by an accumulation of ammonium and salts around the roots because of a lack of leaching.

Interestingly, the most severe leaf burn problems have been in organic strawberry fields supplemented with pre-plant fertilizer. This pattern is consistent with what we know about these fertilizers, which are amendments such as blood or feather meal, meaning that they are fully mineralized in a matter of weeks after incorporation. Therefore, fields containing these fertilizers likely right now have significant amounts of ammonium accumulated in addition to the salts concentrated around the roots due to the lack of winter/spring leaching.

If our hypothesis is correct, growers who have this problem should counteract the buildup of harmful agents by irrigating with overhead sprinklers or at the very least with heavy watering through the drip tape. Overhead irrigation is a good substitute for rain and provides the abundant amounts of free water needed to move the ammonium and salts away from the plant roots where they are causing harm. 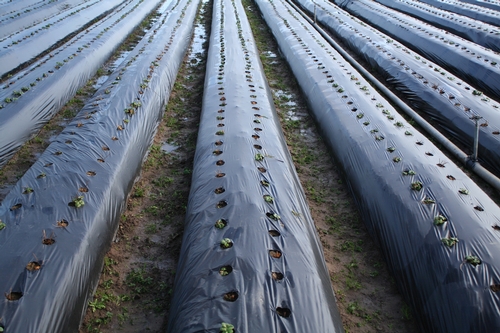 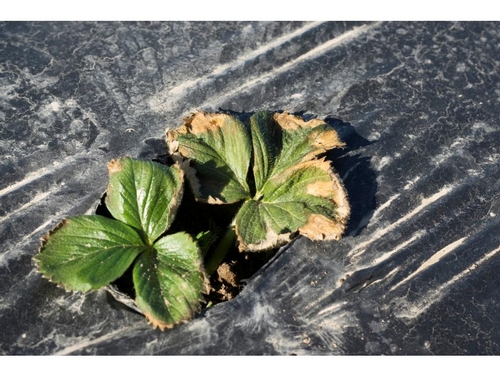 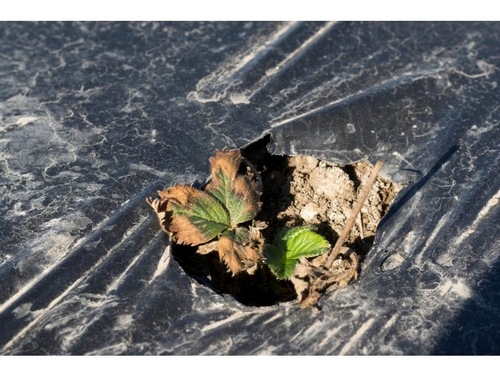 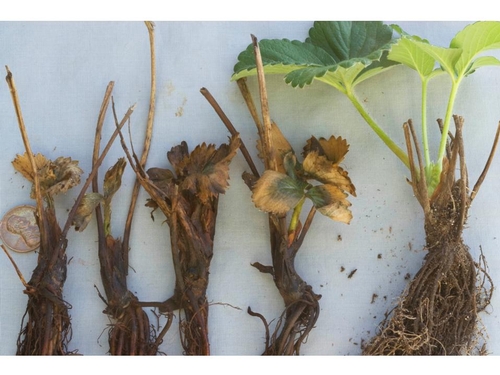 Photo 4. Progression of decline with dead plant on the left and unaffected plant on the right. Courtesy Steven Koike, UCCE.
Tags: ammonium (4), irrigation (1), plant decline (1), salt (11), strawberry (74)
Comments: 4
Comments:
by Sam
on January 16, 2012 at 3:33 PM
Do you think it is being caused by the use of fumigants? I mean the alternatives of methyl bromide like Choloropicrin, Kpam, Vapam etc. are not doing the job and something is accumulating in the soils over the years?
by Mark Bolda
on January 17, 2012 at 7:46 AM
The above is not caused by fumigants, since that field, and a significant proportion of others observed were not fumigated.
Funny you should ask about fumigant damage, I am working on a post with pictures to outline this problem.
by four seasons park lane
on April 20, 2012 at 12:19 AM
It is quite interesting. Is the soil being beint tested actually ?

Sandra
by Mark Bolda
on April 20, 2012 at 8:16 AM
That's a good idea, let me see that I get a soil sample out of there- EC's would be especially interesting. As you know from the later posts, this field is now doing fine.