Last July, when the summer's most ferocious wildfires near wine country were still smoldering, Wine Spectator magazine suggested the 2008 vintage could be tainted by the smoke.

An article in today's Santa Rosa Press-Democrat seems to confirm that the magazine's early prediction is coming to fruition, at least in Mendocino County.

“Winemakers are saying that they think stuff is smelling funny to them, and they want to know what’s going on,” the Press-Democrat article quoted Glenn McGourty, viticulture advisor for UC Cooperative Extension in Mendocino County.

The article said McGourty held a workshop to teach winemakers options for preventing, for example, an unpleasant smoky quality from masking the subtle oak, buttery, vanilla flavor of their best chardonnay.

Michelle Bowen, director of laboratory operations at Vinquiry, said grapes are coming in with an aroma that is "kind of smoked salmony and fishy.”

"The good news is that there seems to be the technology to fix things if something is wrong,” McGourty is quoted in the story. Reporter Kevin McCallum wrote that McGourty was referring to filtration companies that specialize in removing the malodorous compounds.

“Winemakers are wizards at taking problems and turning them into drinkable products," McGourty concluded. 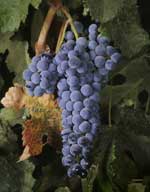