“The bottom line is no one knows what’s causing it,” Haviland was quoted.

But the bees did their job in almond orchards this year, taking advantage of a near-perfect pollination window in late February, mild spring weather and a fair summer.

The health of bee colonies for next season’s pollination period won’t be known until late winter when bees come out of hibernation, Nachtigal paraphrased Haviland. 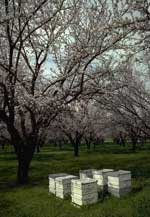