Avocado Farming with High-Priced Water. Can It Remain Profitable?
Published on: April 3, 2012

Water prices in San Diego County continue to increase and there is no end in sight, especially with periodic drought years and California losing some share of its Colorado River water.  It is easy to see the response from growers; water is being turned off in many of our districts leaving acres and acres of dying trees.  The water districts get nervous because there is not enough money coming in to cover their fixed costs, so they raise the price of water.  And, they raise it again.

The math is simple.  Some of our water districts are selling water to growers for $1200 - $1300 per acre foot.  At a water requirement of about four acre feet per acre for avocados in the inland areas of San Diego County, water will cost $4800 - $5200/acre per year.  If you are producing 5000 lbs per acre (the average yield in California for the last five years) and receive $1/lb for your fruit, you get less than your water costs.  And that doesn’t consider labor costs, fertilizer, taxes, insurance, vehicle costs etc.  Profits?  Are you kidding?

Are we done?  Either prices for our fruit have to increase, or we have to increase the yield per acre.  As for prices, we don’t have control over market prices; they rise and fall with demand by consumers, on and off years in our groves and interference with Mexican, Chilean and now Peruvian imports.

Can we increase yield per acre?  The private consultants and the farm advisors have spent our careers trying to help growers with proper irrigation scheduling and balancing out the pressures and flows, proper fertilization, controlling  thrips and persea mites at the right time, and dealing with avocado root rot (which continues to be a huge problem).  Despite good farming practices yields per acre have not increased dramatically for most growers.  To be fair, some growers are doing quite well with good farming practices, good weather and good soil. but It will probably take a dramatic increase for most of the growers to stay in business in San Diego County.

I saw a dramatic increase in yield per acre recently in two groves, one in Temecula (owned by John Cornell) and one in the southern area of Escondido (owned by Steve Howerzyl).  The Temecula grove produced over 30,000 lbs/ac in the sixth year from planting and the Escondido grove produced 24,195 lbs/ac in the fifth year.  Both are high-density groves planted on a 10’ x 10’ spacing (435 trees/acre).  This kind of production is exciting and might bring hope to avocado production for the future in San Diego County.   Yield data is supplied in Table 1 and 2.

Table 2.  Hass avocado yield data supplied by the grower for a high density, non-pruned planting in Escondido.  Yield data is supplied in pounds/acre.

However, both groves have problems!

The Temecula grove had a low fruit set in the spring of 2011.  (This was the reason I was called out to look at it).   Of course a large part of the problem is the inherent on/off cycle in avocados.  However, in order to keep these trees in a high density situation without crowding, the grower had to prune the trees.  In the late winter/early spring of 2011 every tree was pruned on all sides and topped at 8-9 feet.  This effectively removed a lot of the fruiting wood and the trees had a reduced flowering and fruit set as a result.  Remember, the Hass avocado flowers and sets fruit primarily on the outside of the tree canopy.

The Escondido grove was not pruned and all of the trees had grown into each other, creating an incredibly crowded grove.  It was so crowded that the irrigator was complaining that he couldn’t get through the grove to check the sprinklers.  The grower commented that his plan was to remove all of the trees in the eighth year and start over again according to the Hofshi idea that was suggested several years ago. (More on this later in this article).

I like the idea of close spacing for increasing yield per acre, but both groves need a good idea for maintaining the spacing and yet produce fruit every year.  I proposed pruning in a three year rotation; the southwest side would be pruned the first year, the northeast side pruned in the second year, and the tree would be topped at eight feet in the third year.  Then the whole process would start over again.  By using this method there would always be fruiting wood on the tree.  And it is an easy method to teach grove workers.

The only problem with this pruning idea is that we have never tried this in a trial.  This is why I proposed a trial to the California Avocado Commission to set up a high density trial with Hass and Lamb Hass, comparing two pruning methods: complete pruning each year vs. the three year rotation idea.  The Commission liked the idea and they funded the trial, along with grower education classes.   The trial and the classes will commence in the summer of 2012.

High Density Avocado Plantings.  High density plantings were proposed in California in an article in Subtropical Fruit News by Fallbrook grower Reuben Hofshi in 1999.  Hofshi stated that the underlying premises for planting on close spacing were:

In the last few years in California we are seeing a severe reduction in our labor force for harvesting.  Pickers are getting picky; they have cell phones and they can call around to find the groves that can be harvested from the ground.  Lugging a ladder around on a steep slope is just not desirable, and they can make a lot more money if they don’t have to use ladders.

Researchers in other countries have been interested in high density plantings and many of the new plantings in Chile are planted in high density patterns.  Ernst and Ernst, growers and nursery owners in South Africa maintain that  high density can only be successful if the trees are pruned to a central leader immediately after planting, and maintained in that manner through the life of the tree.  They are working with a Hass-like variety known as ‘Maluma’ which has more of a natural central leader than does ‘Hass’.

Pruning.  Growers in California have traditionally avoided pruning.  Other than stumping periodically if the trees get too tall, not much pruning is done.  One of the reasons is the labor to prune.  It is difficult to determine from work done in foreign countries how much labor is involved in high density because many of the areas use the growth retardant paclobutrazol, a chemical we are not allowed to use in the U.S.  We will keep track of our labor costs in our trial and will report this to growers interested in high density plantings.

Can avocado growers survive in a county with high priced water?  Possibly.  High density plantings may be one solution to a really serious problem.  But growers must continue with good farming practices such as a complete leaf analysis each year along with proper irrigation scheduling. 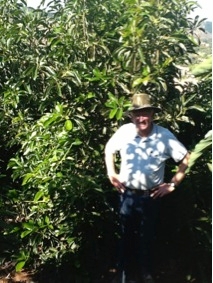