Some points to ponder on a rainy few days regarding phosphorous fertility in strawberries.

Since the work described below was conducted both years in a soil of or above 80 ppm phosphorous, we can’t define where the agronomic threshold for crop response from additional phosphorous lies and subsequently can’t publish in a peer reviewed journal.  Subsequently this is not meant to be a guide for phosphorous fertility in California strawberries.  Nevertheless, since many of the soils we farm are well within the concentrations of P described, this work could be instructive to those thinking about soil fertility in strawberries.

Introduction:  There is a significant body of work in lettuce and several other vegetable crops on the California Central which finds that above a certain soil test threshold concentration there is no longer any plant response to any added phosphorous (P).  The following two year study was designed to approach the hypothesis that this also holds true for strawberries.

Year 1 (2008-2009): The field for the study in year one was located south of Salinas and had the following characteristics:

Supplemental fertilizer applications to trial plots through the season were in total the equivalent of 54.7 lb N, 60 lb P, and 60 lb K and were achieved with applications of 3-18-18, 20-20-20, and ammonium sulfate.

Yield data for marketable and cull fruit was taken once a week beginning April 7 and ending September 16. As soil phosphorous levels do not change rapidly even in the presence of a crop, soil data for phosphorous concentration was taken once from the field before trial placement and then on August 24, 2009, and plant tissue data consisting of petioles and blades was taken once a month beginning in January, 2009.

Supplemental fertilizer applications to trial plots through the beginning of September were in total the equivalent of 172 lb N, 0 lb P and 12 lb K and were achieved with applications of CN9, 0-0-25, and UN32.

Yield data for marketable and cull fruit was taken once a week beginning April 30 and ending September 2.  Soil data was taken once a month starting in October, 2009 and no samples taken in June or July of 2010.  Plant tissue data consisting of whole leaf blade nutrient concentrations was taken April, May, August and September.

Blade and petiole information given below is a summary of the data sampled over the course of the first year of this study.  There are no significant differences by date between plots with P added and those with no P added.

Blade and soil nutrient information given below is a summary of the data sampled over the course of the second year of this study.  Unless indicated so, there are no significant differences between plots with P added and those with no P added by date.

Comments and Discussion: It is clear that the addition of phosphorous in this study covering two years of distinct strawberry crops did not result in yield differences, nor in plant tissue concentrations.

That soil P values did not decline very much, if at all, in both years should not be surprising.  For one, the soil test value is a measure of the soil P equilibrium, which means that when plants remove P from the soil solution, additional P comes into the solution from precipitated forms.  In other words, a soil with a high P test like the one in these tests simply backfills what is taken up by the plant from its ample reserve.  Secondly, according to sampling done by Tim Hartz and his lab over the past few years, we have no indication that strawberries are removing more than 40 lb P per acre per season, meaning that soil test P would not decline more than 15 ppm even if no more P were to come into solution as described above.  It simply will not fall very much.

Many thanks to Tim Hartz at UC Davis and the DANR Analytical Laboratory at Davis for their dedicated assistance with this work.

Finally, I want to thank the grower who collaborated with me on this work for two years.  You know who you are, and you helped me a lot- I wouldn’t have been able to even think about doing this study if you hadn’t helped me so much.  Thank you! 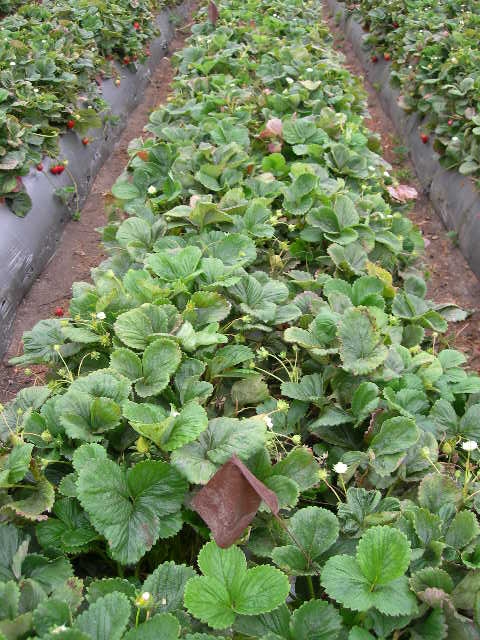 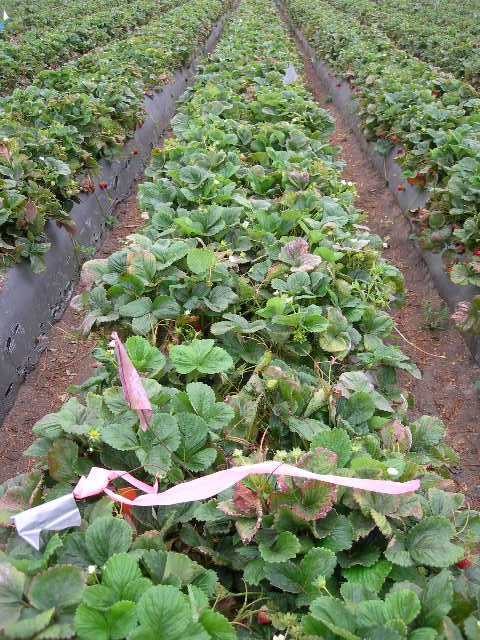