The pictures below are of mis-shapen fruit from two commercial blackberry plantings (one cultivar in each) which have a significant proportion of their fruit affected as shown in the two pictures below.  Both cultivars have many fruit which are incompletely pollinated, in other words, the druplets at the tips of the fruit are not filling and forming.  The result of this is that the fruit has a distorted appearance and a reduced saleability in a fresh market venue.  Nevertheless, since in blackberry the receptacle is harvested together with the fruit there is some structure and stability so the fruit will not be crumbly as would the case be in raspberry.

One would think that the blackberry flower, composed of a succulent receptacle with so many pistils on top of it surrounded by yet more whorls of stamens would not have difficulty pollinating, but it does on occasion.  Along with the pollen, these various structures of the flower are viable for only for short periods of time, and if anything impedes with their intended function during this time, for example wind, rain, excessive heat or lack of pollinators, active pollen will not adhere to the stigma.  The end result of this interference of normal flower function is that the druplet in question will not “make” properly, and the fruit will be mis-shapen.

Indeed, it is common to find pollination problems to be often manifested across one cohort of fruit, i.e. of one size since all the flowers of that cohort were exposed at the same time.  The situation today was that fruit of different ages however were affected, which clouded the case somewhat.   However, thinking back and double checking the records of CIMIS Station #111, we see that there were several (as opposed to one) rainstorms in March and especially April which could have wrecked havoc on many cohorts of flowers over time.  The determination was made that it was this number of unfavorable weather events that caused this malformation of the fruit.  We would not expect to have much fruit malformation past those events, and certainly not going forward. 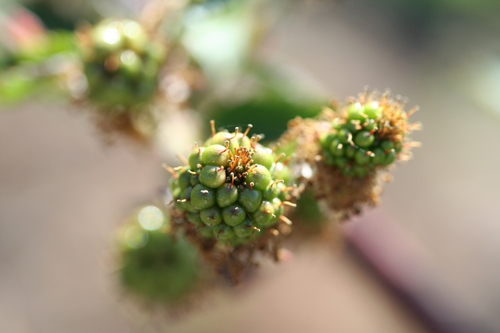 Fruit distorted by lack of proper pollination. It looks like more than a few druplets did not form here at the tip. 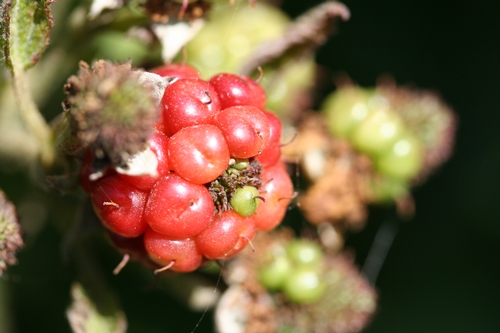