As media outlets begin to analyze the impact of Proposition 2's passage, they are turning to UC for information.

The headline of the Los Angeles Times story - "Prop. 2 probably won't hike egg prices" - is based on the report by the UC Agricultural Issues Center about the potential impact of implementing the provisions of Proposition 2. The article, written by reporter Carla Hall, says egg prices probably won't go up because out-of-state farmers, who already supply a third of Californians' eggs -- and could provide more -- are not affected by the new law, so they won't have to change their housing.

The San Francisco Chronicle ran an Associated Press analysis of Proposition 2. It quoted the UC Ag Issues Center report in noting that the new law will be felt largely by the state's egg farmers, whose production last year was valued at $337 million.

The Chronicle article predicted that uncertainty about how Proposition 2 will be enforced means that fights lie ahead over how much room "factory farm animals" should be provided.

"It will be the loss of an entire industry in California," he said, according to reporter Samantha Young. 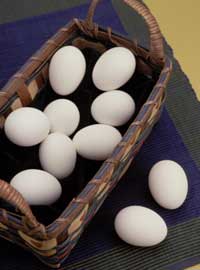