A few years ago at one of our plant exchanges, a couple brought in a tray of what looked like pretty ordinary succulents.  Appearances can be deceiving though.  They explained that these were Stapelia. Stapelia have about 30-40species in the genus and are originally from South Africa.  Globally they are known as starfish flower but apparently in Africa they are called carrion flower.  They can range from a few inches to a few feet in height. Their flowers can range from a two centimeters to sixteen inches across.  All but one have flowers that smell like dead meat to attract flies that are the plants' pollinators.

Always attracted to the bizarre, at least in the plant world, I took one home. It grew like gangbusters, initially on my shaded patio and then inside for the winter. It seemed happy, but no flowers. Recently I moved it to another room and suddenly I had a bud. It took several days to open and sure enough it looked like a delicate starfish.  The first night I did not detect a smell.  The second night though it hit me like gangbusters. It smelled just about what you would think it would smell like. I only noticed the scent for a few days and only if I got near the plant.  Next the "legs" on the starfish flower started to fold up backwards and what it looks like now is a cute button.

Looking as the Internet, I think it may be Stapelia lepida, but I'm not sure. I can't wait to see what happens next. The resources say it may form a pod and over a year form seed. Apparently the plant can be fairly easily propagated from stem cuttings if you let them callus over as well as grown from seed.  The biggest problems with the plant seems to be problems with over-watering and with mealy bugs.
I think it's pretty cool. 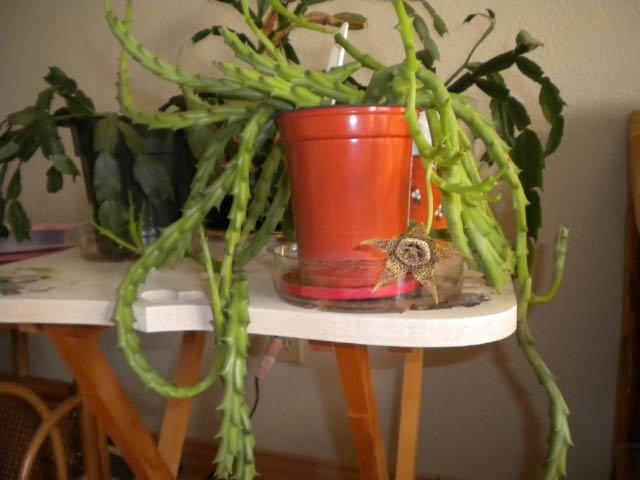 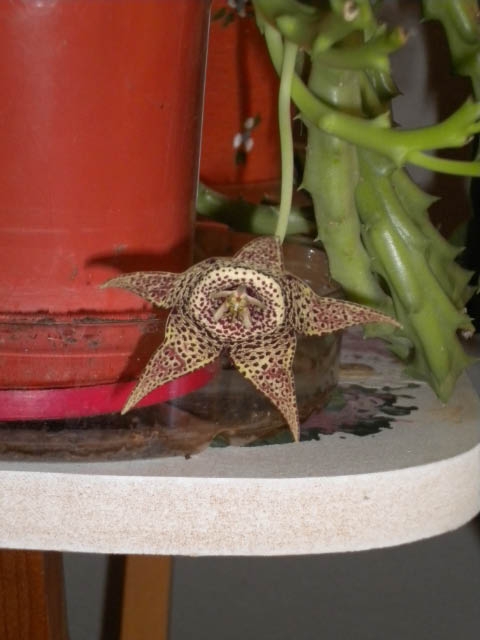 Starfish flower.
Tags: carrion flower (1), dead meat (1), Stapelia (1), starfish flower (1), succulent (5)
Comments: 2
Comments:
by Launa Herrmann
on June 21, 2012 at 8:08 AM
Thanks, Karen, for posting on this succulent. I have a slip but had no idea what it was. Now I can't wait to see it flower.
by A1ChennaiFlowers
on January 24, 2013 at 12:12 AM
I’m always impressed to see how people can share ideas toward being green at home.
I must admit though, I’d really like to see more focus on this being pushed in the corporate world. I know there are some efforts made by some corps, but just imagine if this was pushed as an everyday thing. After all, we spend the majority of our time at work and these habits would simply carry through.
Leave a Reply: