Here is an interesting case regarding a slight purpling of the newer leaves of raspberry.  While the case below involves ‘Polka’ variety red raspberry, I’ve seen it this year on ‘Josephine’ red raspberry in a different field as well.

The question posed is whether this purpling is meaningful from a plant health standpoint.   Will this problem get worse and detract from yield and cause problems with next years crop?

For starters, there is are no disease symptoms, for example necrotic spots or goo seeping out out of the leaves or stems, nor are there any signs of disease, such as spores or conidial structures visible.

We should consider also possible side effects of insecticide or fungicide sprays.  I do recall once in a trial on the strawberry variety ‘Diamante’ that repeated applications of a strobilurin fungicide such as Pristine or Quadris resulted in a similar pattern of purpling on the leaves.  However in this case on ‘Polka’, the PCA in charge of this field confirmed with me that Pristine had been applied after the symptoms appeared, and this is only one application of the material.  There was only one other pesticide application previous to this one, and it was more than a month ago.

What about nutrient deficiency?  A simple application of what we know from nutrient deficiency books would inform us that the purpling we see here refers to some sort of phosphorous deficiency, but other nutrients can cause this too.  Furthermore, those having more than a passing knowledge of the agricultural soils in the Pajaro and Salinas valleys know they are rarely phosphorous deficient, and more often than not actually have an excess of this nutrient.

Which brings us to nitrogen.  Nitrogen, while commonly associated with yellowing rather than purpling of leaves, leaches out of the soil easily and as such can be deficient even in the rich soils of the California central coast.   As we know, nitrogen deficiencies can be manifested in plants as a reddening or purpling of the leaves stemming from an accumulation of the same carbohydrates resulting from phosphorous deficiency.

The only way we are going to know if the above has any truth to it at all however is to take some leaf samples.  The chart below is from a bulk sample consisting of at least twenty leaves, each taken from around the fifth leaf of the plant (note that this is a bit younger than the seventh leaf common for sampling, but the purpling was only found at this stage and younger).

Samples were analyzed by the Soil Control Lab in Watsonville.

The chart above shows us that for one there are no dramatic differences between in nutrient concentrations of green leaves compared to those which are purple.  On the other hand, concentrations of nitrogen, phosphorous and potassium are trending just a tad low, with perhaps the nitrogen being the most significant especially since the sampled leaves were on the young side. 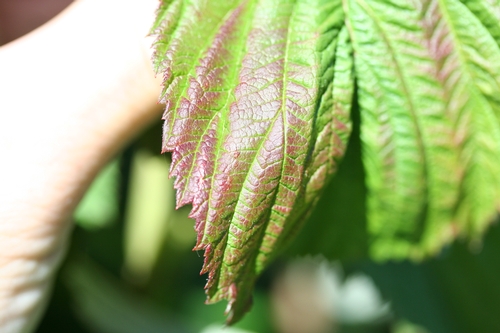 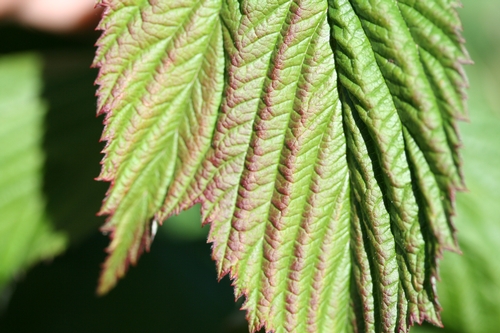 Curious if you amended the soil around the plants and if anything changed. I currently have Polka with purplish leaves.
by Mark Bolda
on May 20, 2015 at 8:09 AM
No soil amendments or anything like that Zach. In hindsight, it must just have been an interaction between the environment and the plant.
Leave a Reply: