The following is a description and evaluation of tip dieback in Arapaho blackberry in a field outside of Watsonville .

As the reader can see from the pictures below, the issue is a rather abrupt manifestation of wilt, followed by a blackening of the tip.  Cutting back the outer layer of the cane reveals (Photo 2 below) that the necrosis is advancing in the interior of the cane, but as with the tip blackening itself, seems to be restricted to the top 4 or 5 inches.

This problem of tip dieback was reported some weeks ago on a few tips of the Arapaho planting and none of the other varieties in the same field.  As of last week this dieback has advanced through most of the planting and most of the tips are now affected and again restricted only to Arapaho.

There are no signs, for example oozing typical of bacteria or fruiting bodies or mycelium associated with a fungus, of disease.  Seeing that the tip dieback is similar to the blackening of young leaf tissue caused by insufficiency of calcium ( for example black heart in celery) we tested with a two replicate sample the nutritional status of cane tips just starting to wilt and compared them to others still apparently healthy.  The output of this evaluation is below.  Also please note that substantial portions of cane were included in the sample, which would be expected to have different - probably lower - levels of minerals than the normally tested leaf tissue.

Considering that if the problem is not a disease, nor nutritional, what is it then?  The answer comes to us from people with experience with the variety and the problem.  We go to John Clark from the University of Arkansas, who has noted previously this very tip dieback on Arapaho blackberry in cooler climates (for which the summer Central Coast obviously qualifies) to the extent that he cautions growers in cooler regions about planting it.

In conclusion we can be fairly certain that the tip burning we are currently observing here in Arapaho blackberry is physiological and caused by an interaction of the variety and our climate. 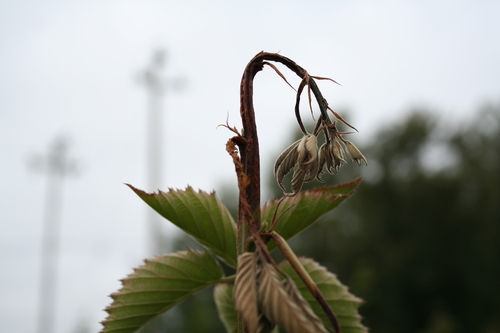 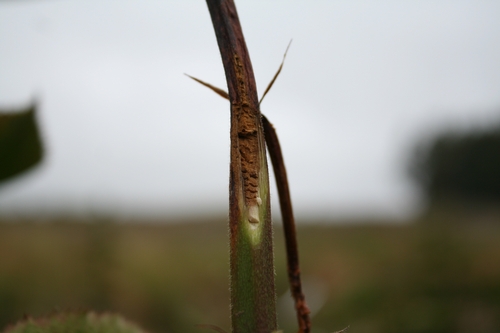 Cutaway of Arapaho cane affected by tip dieback.
Tags: blackberry (18), tip dieback (1)
Comments: 3
Comments:
by Nathan Jaynes
on June 3, 2020 at 9:57 AM
I have been seeing this for several years with my Arapaho blackberries. I have several other varieties planted and they are not doing this.

The cane will get to about 12 to 18 inches in height and just wilt.

I am irrigating and there is moisture in the soil.
by Nathan Jaynes
on June 3, 2020 at 9:58 AM
FOr my previous comment, I live in Morganton, NC...
by Mark Bolda
on June 3, 2020 at 12:16 PM
This is difficult, as you can see from this article my work has been inconclusive as well. Obviously, water is deficient at the tip, but as to what is the cause of the issue is not known.

Best to take Dr. Clark's advice and not plant this, it must be something inherent to the variety.
Leave a Reply:

Recent Posts
MyAgLife Episode 69: Interview with Bolda about the Challenges of Fusarium in Strawberry
June 18, 2021