It's a strange little insect.

A reader likens it to "a cricket on steroids."

A Van Nuys resident says she always wondered what they were. "I've lived in this house for 17 years, and a few times a year I see this strange insect in my backyard.  It is always either dead or dying.  It has a really large head and seems to be a bit top-heavy and has problems walking.   I have never seen these insects anywhere but in my backyard and no one seems to know what they are.  I feel badly for the little critters, since they don't seem to be thriving."

A Vacaville resident encountered this "unknown species of insect" in her backyard. Her dog discovered the first one. Dead. She discovered the second. Alive.

Guess what they found? A Jerusalem cricket, also known as a "potato bug" because it occasionally feeds on potato tubers.

They're among the largest insects found in California and elsewhere in western North America, says Lynn Kimsey, director of the Bohart Museum of Entomology and professor of entomology at UC Davis.

The adult is characterized by its "large shiny brown abdomen with dark stripes, large ovoid head and spiny hind legs."

These ground dwellers crawl (slowly) but they don't fly. They belong to the family Stenopelmatidae. The common species found in California is Stenopelmatus fuscus, Kimsey says.

Kimsey also says they are harmless, although if you handle them, they may bite.

So when you're digging around in your backyard, you may find them under rocks, logs or boards. They feed on plant roots and tubers. "They generate sound by rubbing the hind leg against the side of the abdomen (stridulation)," Kimsey says.

In her Fact Sheet on Jerusalem Crickets posted on the Bohart Museum website: Kimsey points out that "Unlike most other crickets, female Jerusalem crickets frequenty kill the males after mating."

Ah, a touch of the praying mantis behavior!

We've seen Jerusalem crickets beneath the grounds of the Harry H. Laidlaw Jr. Honey Bee Research Facility on Bee Biology Road, UC Davis.  We've also seen their predators: birds of prey, including owls and hawks, but never the prey and predator together.

Seems like a tasty treat for a burrowing owl. 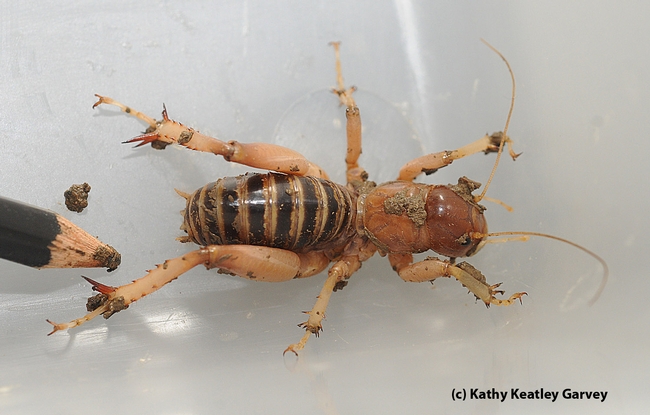 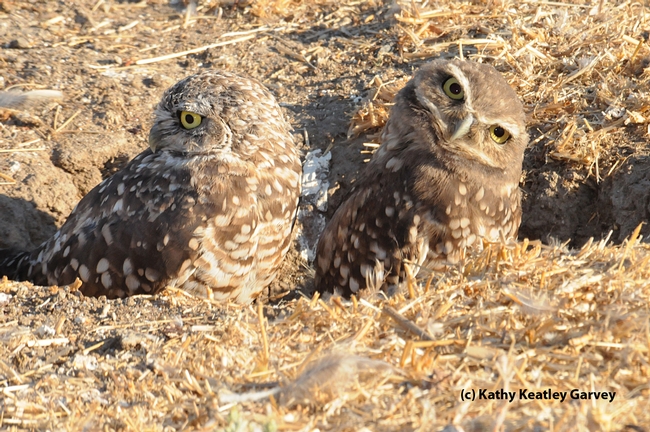 Burrowing owls feed on Jerusalem crickets. (Photo by Kathy Keatley Garvey)
Tags: burrowing owls (1), Jerusalem cricket (4), Lynn Kimsey (345), Stenopelmatidae (1)
Comments: 2
Comments:
by Ed Whisler
on November 26, 2012 at 10:23 PM
East of winters I observed a Barn Owl roost many years ago. Under the roost were dozens of pellets. Almost every pellet had Jerusalem cricket parts in them. There is a good article: "Birds Foraging on Jerusalem Crickets, with Recent
Observations in the Central Valley, California." Central Valley Bird Club Bulletin/Winter 2009.
by Angela Fite
on November 27, 2012 at 5:54 PM
Very interesting information and I'm glad to see that the Cute Burrowing Owls are feeding on the crickets..
Leave a Reply: