The avocado (Persea Americana) is sometimes described as the perfect food because of its digestibility and nutritional value, according to the California Master Gardener Handbook (2002).

Our backyard has an 30 year old (as yet unidentified) avocado tree which has been a real gem!  It produces beautiful fruit and has proven to be frost hardy during a recent mid-January cold snap.  Although we live in Vallejo, which is in Sunset’s zone 17 where frosts are relatively rare, Solano County has 3 additional zones:  zones, 14, 15, and 9 in the Vacaville area.  And you could have your own micro climate within those zones.  For example a property on a hill or ridge top will have good “cold air drainage”, with temperatures a good 10-12 degrees F warmer than in lower lying areas.

According to UC Extension San Diego, the ‘Haas’ cultivar is the preferred one for Southern California coastal valley areas, which is where most of them are grown commercially.  However, Mexican varieties (Persea americana drymifolia) can be grown in the Bay Area, as well as the “banana belts” of the San Joaquin Valley.  Top Sunset Garden Book picks include ‘Fuerte’ (hardy to 27 degrees F), ‘Bacon, ‘Mexicola’ (very cold hardy to 20 degrees F), and ‘Zutano’ (hardy to 27 degrees F).  I’m guessing our tree could be a ‘Bacon’, ‘Fuerte’ or ‘Zutano’, because the color  of our fruit is dark to medium green, turning darker when ripe.  It has a mild, nutlike flavor, and is quite good in a salad.

Fruit ripening varies with the cultivar.  ‘Bacon’ and ‘Fuerte’ mature November to March, and ‘Mexicola’ matures August to September.  Avocado varieties have flowers categorized as Type A or Type B, depending on the time of day they open and when pollen is released.  Sunset recommends either planting a tree of each type, or buying a tree that has the opposite type grafted onto it, which is most likely the case with our tree, since we have only one.

Avocados need good drainage with occasional deep watering.  Mulch should be applied 6 to 12” deep, but it needs to be kept away from the trunk.  Although these trees are very susceptible to ‘Phytophthora’ root rot, the mulching and additional gypsum added to the soil, creates conditions which suppress this fungus.

So, experiment with this tropical treat.  Although your harvest may not be of commercial quality, some of the hardiest varieties can be successfully grown. 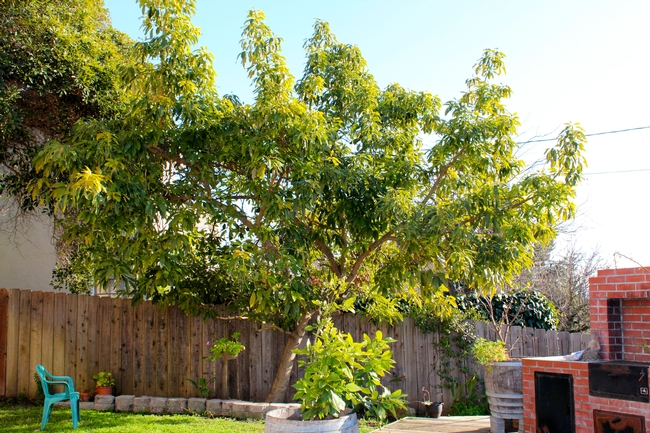 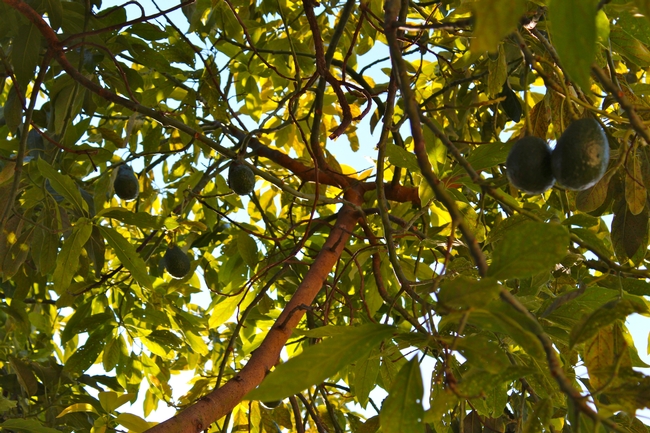 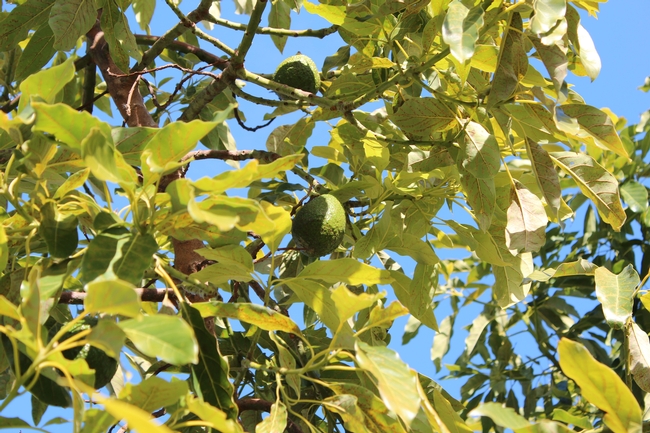 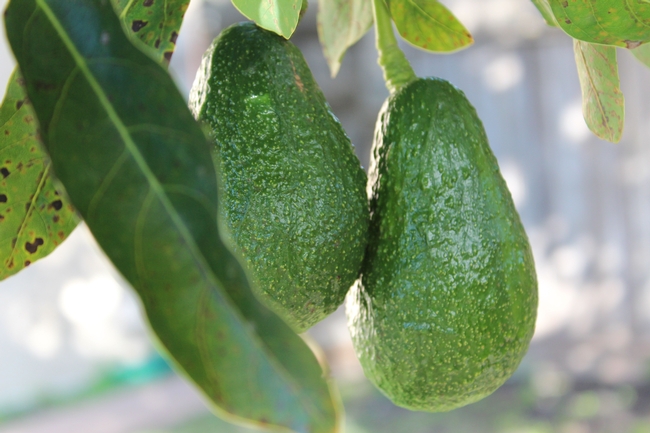 Tags: Avocados (2)
Comments: 11
Comments:
by Karen Norton
on February 24, 2013 at 4:59 PM
Thank you for your article. When we moved from Vallejo to Fairfield there was an avacado in the backyard. The last two years it has really put out some nice fruit. Our's has smoother skin than your photo. It is ready to eat after about a week in a brown bag.
by lisa t
on June 19, 2013 at 11:53 AM
@Karen Norton, what part of Fairfield do you live in? i live in the green valley area, where it is very windy and I am wondering if that would be a problem. Thats why I was wondering what part of Fairfield you lived in.
by Bud Veliquette
on June 19, 2013 at 12:43 PM
We live in Vallejo, which is zone 17, with only occasional winter frosts. There was a frost in December which was enough to freeze back the bougainvillea blooms, but the avocado tree did not seem to take a hit at all. They should do OK in Green Valley, if you can give them enough protection to get them through the first 2 winters. We have a place in Occidental, where I planted 2 of the frost hardiest (to 18 degrees F) types, and they are doing fine, in spite of winter temperatures below freezing about half the time. I have just used the frost blankets available in most nurseries, with no heating pad, though that's another option. Bud
by Ken D.
on June 20, 2013 at 8:25 AM
Currently attempting to grow avocados in Gibson Canyon, Vacaville. Thus far I have 1 Hass and 1 Bacon variety planted in the ground, plus 1 Zutano and another Bacon in 5 gallon pots on my deck. The first problem I experienced within a week of planting was deer depredation. Seems that deer LOVE avocado plants. Oddly, there was only light damage to the Hass, while the Bacon was almost completely destroyed. Generous applications of "Liquid Fence" and some other deterrents have just about solved my deer issues. Second is the heat we had about a week ago did burn up a few leaves on the planted varieties because I have them in nearly full sun and was unable to water while away for a long weekend. Knowing I was going to be away, I placed my potted plants in nearly full shade and did fine beyond some minor wilting.

Thus far, the star of all my avocados is by far the Zutano. This plant visually looks the most full and healthy and even potted, this particular 4 foot specimen is already producing fruit. At this time I probably about 8 viable avocados developing. It is also this plant that I intend to transplant soon, and hopefully I will be able to make the move stress free as to not cause fruit drop!
by Lisa T
on June 22, 2013 at 1:02 AM
@BUD, thanks for the info. I bought a hass tree and will use the blankets when the frost starts up. in the winter.
@Ken, where can I find a Zutano tree at? i would like to buy one of those kinds as well...
thanks everyone for all the info. we just bought a house and landscaped the entire backyard and im very proud of how it turned out but what is a backyard without planting fruit and veggies and I absolutely love avocado but even though im pretty green at growing anything at all, even I knew that growing avocado might be a challenge here, so thanks for your help..
by Jason
on October 7, 2014 at 3:39 PM
Hi I purchased a larger lamb hass avacado tree(15gallon) which I have not yet put into the ground. I also bought a bacon from Home Depot (type "b") to help pollinate. I live in the green valley/ suisun Valley area where the wind can really whip sometimes. Does anyone have any suggestions on how to protect these trees from the wind? I am planning on planting these at the top of my hill which is a good 20 ft higher than the lowest spot in my yard to protect from the frost but am concerned about wind protection. Thanks
by Bud Veliquette
on October 7, 2014 at 6:37 PM
Hi, Jason,
In regard to the wind issue, I would not be concerned about it where you live in the Green Valley/Suisun area. I have seen them growing in the upper end of Salinas Valley, where the wind is constant at 25-30 mph. Planted together, they protect each other. The main concern is frost protection, and I think it was a smart idea to plant on a high point on your lot for good cold air drainage. Bud
Reply by Jennifer Baumbach
on October 13, 2014 at 8:37 AM
Bud! You're doing some MG'ing from far away! Thanks!
by Todd Charske
on July 8, 2016 at 4:07 PM
Avocado trees are susceptible to wind damage their limbs are not very sturdy.

- Todd Charskr
by Natalie
on October 8, 2016 at 10:40 PM
We live in fairfield near the vacaville junction. We couldn't save our zutano tree. once we potted it we got a bad heat spell. We are trying Hass now and everything I read says that it can self pollinate. I know there are type A and B trees. Should we get a different type or will it pollinate itself? Do you think if we put a blanket on for frost it will survive in our area?
by Bud Veliquette
on October 9, 2016 at 5:41 AM
I would check with the local nursery regarding pollination requirements. A bee friendly garden would most likely help on that. The Hass is not particularly known for being frost tolerant, but your particular microclimate may be more forgiving, especially if you use frost covers when temps drop below 30°. Just try it and see.
Leave a Reply: