In a move that might only occur in a county named for a body of water, the Lake County Board of Supervisors declared a state of emergency last week after Fish and Game officials decided not to stock several local lakes and streams with fish.

Fish and Game made the decision after the Pacific Rivers Council and the Center for Biological Diversity filed a lawsuit that blamed the fish stocking program for threatening native fish and amphibians, such as the hardhead minnow, spring- and winter-run chinook salmon, California red-legged frog, arroyo toad and foothill yellow-legged frog.

Fish and Game had decided to drop Upper Blue Lake, Cache Creek, Indian Valley Reservoir and Pillsbury Reservoir from agency's fish stocking program this year, according to an article in the Lake County News. For analysis of the fish stocking controversy, reporter Elizabeth Larson turned to the director of UC Cooperative Extension in Lake County, Greg Giusti.

He said the Board's message got through to the state. As of Monday, state officials reacted to the news by removing both Indian Valley Reservoir and Lake Pillsbury from the list of lakes that won't be stocked.

“Those lakes are back to status quo,” Giusti was quoted.

However, Cache Creek and Upper Blue Lake still won't be stocked. Giusti told the reporter that Upper Blue Lake is the county's highest priority when it comes to the stocking question.

Fish and Game will conduct surveys to look for the hardhead minnow and red-legged frog in Upper Blue Lake. If the surveys don't find those species, Fish and Game will recommend to U.S. Fish and Wildlife that the lake be removed from the list.

According to the article, Giusti said the probability of finding the hardhead minnow in Upper Blue Lake is small. However, Cache Creek may never be removed from the list of water bodies that won't be stocked because of the red-legged frog. 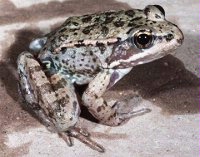