On January 26, 2013, Rush Ranch hosted Dr. Robbin Thorp, a native pollinator expert and emeritus professor in the Department of Entomology at the University of California, Davis. Dr. Thorp gave a lecture entitled "Buzzed for Bees," where his presentation focused primarily on the topic of native bees (as opposed to honeybees).

Dr. Thorp explained that bees share a common ancestry with wasps. Some of the differences between bees and wasps include, but are not limited to, how bees use nectar as "flight fuel" and that there are branched hairs on bees not found on wasps. There are apparently 19,500 species of bees around the world, which are more than all the species of reptiles, mammals, and amphibians combined. Of the 4,000 species of bees found in the United States, 1,600 species are located in California, with 75 species found in the Haagan-Daz bee garden on the UC Davis campus alone. Fun fact for trivia enthusiasts--there are no native bumble bees in Australia.

Farmers and gardeners are especially interested in the well-being of their bees, as 15 - 40% of all crops and edible plants are pollinated by bees.  According to Dr. Thorp, one acre can support two bee hives, and native bees such as the Mason bee, are more efficient at pollinating than the honeybee.

Dr. Thorp discussed how gardeners and farmers can help enhance the native bee population by creating an environment appropriate for them. Such strategies, include, but are not limited to, allowing weeds and cover crops to go to flower, multi-cropping, and growing hedgerows. Since native bees are seeking both pollen and nectar, in order to attract them, one must plant a diversity of flowers in 3' x 3' blocks/sections and create a nesting area for them, which may be as simple as leaving some bare soil and/or creating tubular cavities for nesting.

In addition, to maintain an on-going native bee population, one must plan ahead and plant different native bee plants at varying times throughout the year. Below is a non-exhaustive, but readily available, list of plants you may consider planting in your own backyard to create and/or preserve a native bee habitat:

Dr. Thorp said that wild bees are not abundant, and springtime is the best time to view them.  He suggested checking out Manzanita trees while they are blooming, as they are most likely to attract solitary bees, like the digger bee.

For additional information on native bees, Dr. Thorp suggested the following resources, in no particular order: 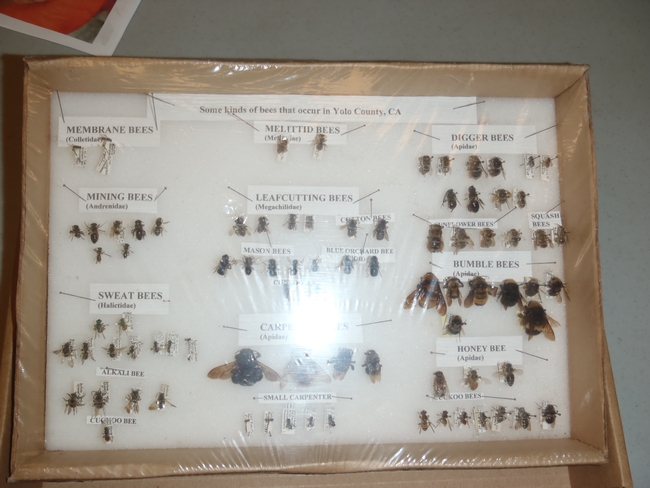