I’ve heard many people, including my parents, talk about having received an orange every year in their Christmas stocking.   Apparently, this custom dates back many years. I remember reading a Laura Ingalls Wilder book as a child in which Laura was thrilled to receive an orange for Christmas. It was a special treat, at a time when oranges were rare and expensive.

During my holiday break, I read an interesting book called “Orange Empire: California and the fruits of Eden”, by Douglas Cazaux Sackman, that tells the story of how oranges went from being a once a year treat to something common and inexpensive.    Los Angeles was once the center of the “Orange Empire”.
Oranges were brought by the Spanish as they settled the missions, and the first grove in Southern California was planted at the Mission San Gabriel, here in Los Angeles County, in 1804.   They were grown on a very limited scale until a frontiersman and entrepreneur named William Wolfskill decided to try growing oranges commercially. He obtained permission to farm on a hill in what is now downtown Los Angeles, and began planting oranges and lemons with seeds from the Mission.   By the time the Gold Rush began in 1849, he was able to ship his citrus crop north to miners who were willing to pay a premium to avoid scurvy, up to $1 per orange. Wolfskill’s Los Angeles orchard was never more than 70 acres.
The citrus industry in Southern California really took off in the 1870’s due to two innovations. First, a family in Riverside County obtained two trees of a citrus variety from Brazil.   The fruit from these trees was larger, sweeter, and easier to peel . This variety, which came to be known as the Washington navel orange, created a surge of interest in growing citrus. In the same decade, the transcontinental railroad system was completed, and William Wolfskill shipped the very first railcar load of oranges east in 1877.   In the 1880s, with the advent of refrigerated shipping, the growing citrus industry got another boost.   Many growers quickly entered the citrus production business, and towns along the rail lines in Los Angeles County were founded as part of the burgeoning citrus industry, including Pasadena.
“Centered on the Los Angeles basin, a vast citrus landscape was coming into being” said Sackman (p.42). “In 1870, only 30,000 orange trees were growing in the state. Twenty years later, 1.1 million trees were producing fruit”.   By 1893, local citrus growers had organized themselves into the California Fruit Growers Exchange, later known as Sunkist. Sunkist was instrumental in driving the demand for oranges, promoting oranges and orange juice as health aids, with national advertising campaigns beginning in 1907.   Sunkist advertisements, along with colorful orange crate labels, helped to brand Los Angeles and Southern California as a new Eden, the land of sunshine and good health. This image helped to drive migration from other parts of the US to the Los Angeles region, particularly during the 1920s and 1930s.
The Los Angeles “Orange Empire” began to decline after World War II, as acres of citrus were rapidly sacrificed to the growing, sprawling suburbs of the Los Angeles basin.   As recently as 1970, there were still more than 50,000 acres of citrus in the county; but today, most orange trees in Los Angeles are in backyards rather than groves.
As a parent of two teens, I know that today, an orange in a Christmas stocking might not be appreciated. But to pluck one off a tree, on a 75 degree day in January, still makes Los Angeles seem like Eden to a former Midwesterner like me. 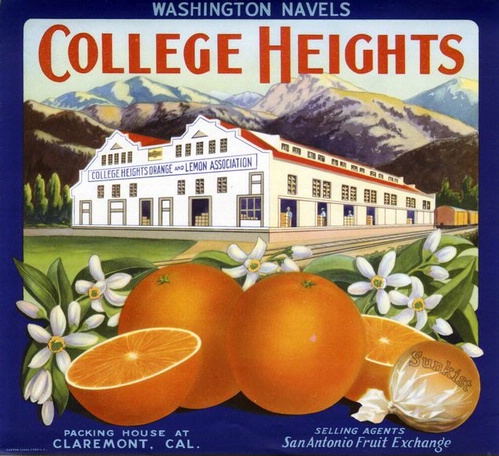