Try spotting sheep dogs among grazing sheep.
In touring the back roads of California’s great Central Valley during wintertime, you may be surprised to come upon hundreds of sheep grazing alfalfa fields. The sheep are penned in by electric fences and graze the fields to near bare soil. Look closely and you may also see some Great Pyrenees dogs, used to guard the livestock from coyotes and other predators. The dogs blend in well with the sheep and it’s often fun to try to spot them in the mob.

You may wonder about this practice of ‘sheeping off’ or grazing alfalfa fields, as sheep are most associated with rangelands in the coastal foothills or the Sierras. Basque sheepherders have historically managed sheep grazing in the Sierra Nevada mountains, which is a legacy that still remains in arborglyphs, or drawings in aspen trees, and in current grazing leases on federal lands. But sheep grazing in alfalfa fields has also been a long-time practice, probably for as long as there’s been alfalfa in our valley. A Basque arborglyph.
‘Sheeping off’ alfalfa fields in the fall and winter, when alfalfa fields are dormant and not growing, is of benefit to both alfalfa growers and sheep producers. The bulk of California’s lambs are born in the fall and early winter. Grazing alfalfa at this time accommodates the lambing operation by providing high quality feed at a time when forage is usually scarce. Sheep producers commonly establish enclosed paddocks on alfalfa fields with temporary fencing and then move the sheep to new areas of the field, often daily.

Alfalfa growers also benefit from sheep grazing in their fields during wintertime when the alfalfa is dormant. Alfalfa is a perennial crop which means that the root system remains alive below ground throughout the year even when the stems and leaves die during winter dormancy.  Sheep feed on winter weeds, helping to control them in both seedling as well as established alfalfa stands that may negate the need for an herbicide treatment. Sheep grazing also reduces the alfalfa vegetation that dies back in winter, producing cleaner hay, the following spring. Sheep also help control weevil insect pests by feeding on older alfalfa stems, where the weevils lay eggs. This practice may help reduce weevil pressure and feeding damage to the first alfalfa cutting when weevils are actively feeding, a positive benefit, especially for organic growers.

The correct timing of alfalfa grazing is especially important for sheep producers since incorrect timing can result in a potentially lethal condition in sheep called bloat. Bloat occurs when a ruminant, such as a sheep, consumes too much fresh alfalfa with a high concentration of leaf proteins called saponins. When saponins are digested in the rumen, they create foam that prevents the sheep from burping up gases that are a produced from digestion in their stomach. Grazing too early in the fall or too late in the spring increases the risk of bloat, which is another reason why alfalfa grazing is done during the winter months.

Next time you come upon an alfalfa field full of sheep, know that they’re there for a purpose, providing feed for sheep and weevil and weed control for the alfalfa, in an environmentally sound manner.  And, see if you can get in a game of ‘I Spy’ and find those Great Pyrenees dogs.

For more information, see the articles listed below: 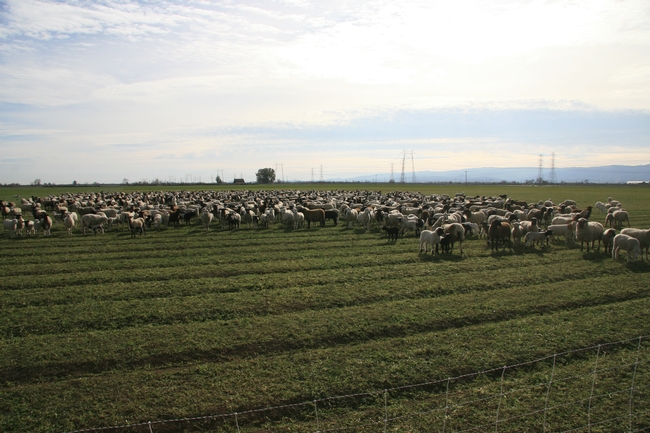 'Sheeping off' an alfalfa field. 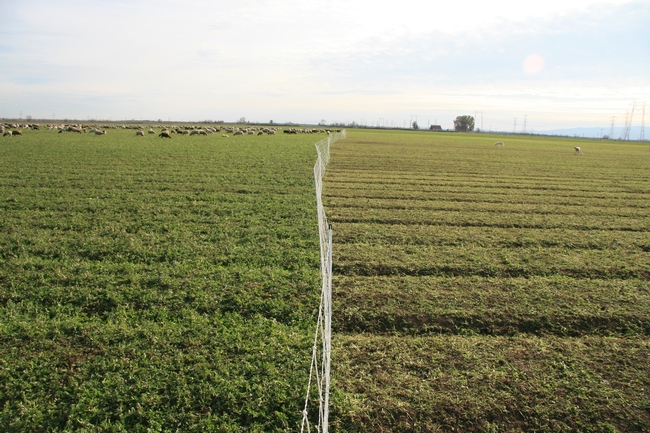