Are All Phosphorous Products the Same
Published on: February 13, 2013

South African plant pathologists were the first to show that root rot in avocado could be controlled by trunk injection with both phosphorous acid and the patented material Aliette®.  Aliette was briefly registered in California in the late 1980’s, but theregistrant soon lost interest in pursuing a full pesticide registration when it became apparent that other researchers believed phosphorous acid could be registered as a fertilizer - a process much less costly and simpler than a pesticide registration. The company continued to hold on to the patents for the product and the breakdown products that were useful in root rot control.  By holding onto the patent, this effectively stopped other companies from pursuing a pesticide registration for phosphorous acid.    In 1990, a publication reported that phosphite could be used as a source of phosphorus fertilizer and this became the basis for the registration of phosphite as a fertilizer.  Subsequently, when the original patent expired, at least two materials have been registered as fungicides containing phosphite – Fosphite® and Agri-fos®.  There are, however, numerous phosphite materials that have been registered as fertilizers (for some brands see Brunings et. al., 2005, http://edis.ifas.ufl.edu/HS254), and every day seems to bring more brands onto the scene each making claims of having the best efficacy.

We wanted to see if we could detect an efficacy difference between Aliette, another registered phosphite fungicide and four different materials registered as fertilizers, for a total of six materials.  In a greenhouse, three-month old ‘Topa Topa’ seedling avocados with cotyledons removed were planted into a Phytophthora cinnamomi -inoculated organic potting mix. A control was also planted without the inoculum, as well as an inoculated control.  One of six different materials was then applied as a soil drench until draining from the bottom of the liner.  The materials were applied at the equivalent phosphorous acid concentration.  There were 20 replicates for each of the controls and treatments.  The experiment was repeated twice.

At harvest, root fresh and dry weights were highest for the non-inoculated trees and lowest for the untreated, inoculated controls, in both trials.  All treatments’ associated weights intermediate between these two were statistically the same.  Even a repeat application of one of the treatment materials in trial II didn’t result in greater root weights than single application treatments.  Shoot weight, both dry and fresh, was much less affected by root rot and treatments.  There were no differences in fresh shoot weight in the second trial, not even between the inoculated and noninoculated controls.  The root and shoot weights of all the treatments in the second trial were higher than in the first trial, indicating that either the inoculum was not as effective or that the trial was not continued long enough to produce as much damage.

Root rot studies often have dramatic effects on root weights while shoot weights may remain little affected.   It is clear from our data that phosphites reduced the severity of root rot in this study, but that there was no benefit of a single source of phosphite relative to any other source.

Below:  Healthy and decaying avocado roots. 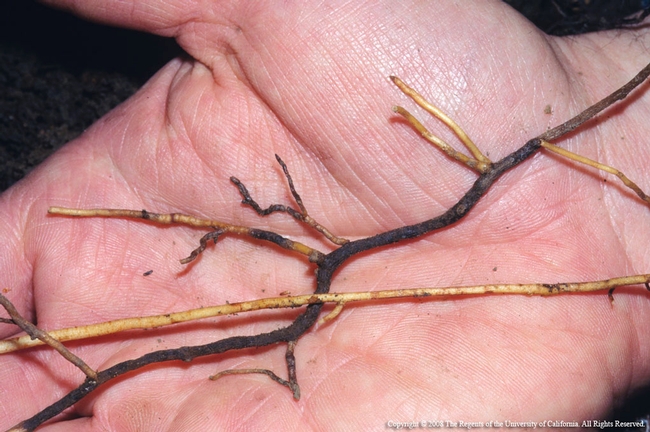