Just Because Spring is a Good Time to Prune Navel Orange Doesn’t Mean You Should
Published on: March 5, 2013

A sure way to generate controversy among citrus growers is to initiate a discussion on navel orange tree pruning. Some growers maintain that yield and fruit size is best maintained by minimal pruning, while others believe that the number of large fruit is increased when trees are severely pruned. A ‘standard’ manual pruning for navel oranges does not exist, but the closest thing to it is a procedure that involves pruning from the tree; 1.) shaded, dead branches 2.) branches which cross from one side of the tree to the other and 3.) green, triangular, juvenile shoots from the tree.  This type of pruning commonly goes under the name of ‘deadbrushing’.  Deadbrushing is a relatively light form of pruning, and a trained crew usually spends less than 15 minutes per tree performing it.  In addition to any manual pruning, most navel orange orchards in California are mechanically ‘hedged’ and  ‘topped’ to provide continued access to trees and their fruit by equipment and people involved in orchard cultural and harvest activities. Although growers have been growing navel oranges in California for over one hundred years, surprisingly few experiments have been conducted to determine the effect of pruning on navel orange yield and quality.

To assist in providing some guidance related to pruning and its possible effects on fruit yield and quality, an experiment was established in 2000 in northern Kern County in an orange orchard that was typically harvested in late December or in January.  In 2000, 2001, 2002 and 2003, yield, fruit quality parameters and manual pruning costs were compared among mature “Frost Nucellar” navel trees (90 trees/acre) having one of three topping-height treatments (14 ft, 16 ft, and untopped trees). In addition to a topping treatment, the experimental trees were given one of three levels of manual pruning 1.) removal of several large scaffold branches in March of 2000 followed by deadbrushing in 2001, 2002 and no manual pruning in 2003; 2. dead brushing only in 2000, 2001, 2002 and no manual pruning in 2003; or 3. no topping or deadbrushing).  Data were collected from experimental trees surrounded by similarly topped and manually pruned border trees. Fruit weight, numbers, size, grade and color were determined the day after harvest at theUniversityofCalifornia ResearchandExtensionCenterexperimental packline near Lindcove,California. The year, in this report, refers to the year that the crop bloomed and not to the year of harvest.

For the 2003 crop year, even after 4 years, trees that were severely pruned in the spring of 2000 produced less total yield and less fruit in the most valuable-size range (i.e. 88 to 48 fruit/carton) than trees that were deadbrushed or left unpruned.  In 2003, differences in yield among manual pruning treatments were greater than in 2002 probably because of the higher yield potential that appeared to exist across the industry in 2003. The canopy of the severely pruned trees in 2003 had not yet retained the size of the deadbrushed or unpruned trees after four years, which limited their potential fruit production.  In contrast, in 2001 only one year after the manual treatments were imposed and a year with high spring temperatures and very poor fruit set, no differences in yield were found among manual pruning treatments.

When the data of average individual tree performance are summed over the four years that this experiment was conducted, the treatment that included removal of some major scaffold branches in March of 2000 with deadbrushing in 2001 and 2002, was inferior in terms of yield, fruit number, and number of valuable-sized fruit in the range of 88 to 48 per carton than to trees that were only deadbrushed or those that had no manual pruning. Most of the detrimental effects of severe pruning on yield (and on fruit quality) occurred at the December harvest following the severe pruning in March 2000.  Over the four years of the experiment, the trees that were not manually pruned produced equal or better cumulative yields of fruit, equal or more valuable sized fruit, and fruit with equal grade compared to deadbrushed or severely pruned trees. The percentage of the fruit on the tree larger than size 88 was greater in the severe pruning treatment, but because total fruit number per tree was less and more of this fruit was overly large (i.e. greater than size 48) the number of the most valuable-sized fruit/tree (sized 88 to 48) was less.  Obviously, the trees that were not manually pruned had no associated manual pruning costs when compared to the other two pruning treatments.  Manual pruning costs, from 2000 through 2003, not including stacking and shredding of pruned brush, were $8.50/tree for the deadbrushing treatment and $13.00/tree for the severe manual pruning treatment.

Fruit yield or quality was not different among topping heights in any of the four years of the experiment. Topping height did not affect yield, probably because of the wide spacing and tall trees in this orchard. The canopies of untopped trees had little fruit within 4 feet of the ground as a result of shading of the lower canopy by neighboring trees. Removing the top 4 feet from an 18-foot tall tree moved the fruit-bearing volume downward in response to greater light penetration into the lower canopy but did not decrease the volume of the tree that received sufficient light to produce fruit.  This effect was in contrast to severe manual pruning, which reduced the volume of the unshaded canopy overall, limiting the volume available for fruit production. A highly significant positive-linear correlation was found in the data across the four years and treatments between the total numbers of fruit produced per acre versus the total number of fruit sized 88 to 48 per carton produced per acre.  This functional relationship existed whether reductions in fruit numbers produced per acre were the result of severe pruning in March or from weather-related phenomena such as occurred in 2001, suggesting that anything that reduced fruit numbers below approximately 130,000 fruit per acre resulted in a decrease in the number of fruit sized 88 to 48 per carton in this orchard.

Of course, there are other reasons to manually prune orange trees, other than to improve fruit size.  If certain insects, likeCaliforniared scale or cottony cushion scale have been a problem, pesticide spray coverage may be improved by making the canopy less dense through pruning and fruit quality may be improved by making this investment.  In general, what this pruning research has reinforced is the concept that growers should know why they are pruning orange trees and that manual pruning is unlikely to increase the number of fruit in the most valuable size ranges. 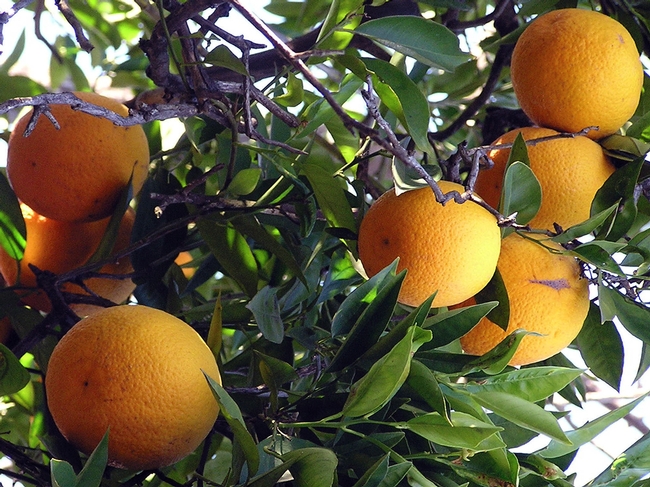