If you like community gardens, then you'll want to visit the Avant Garden at the corner of First and D streets in Benicia.

The Benicia Community Garden (BCG) signed a lease agreement in the fall of 2010 with Estey Real Estate to establish a downtown community garden. The land is for sale, but until it's sold, it's a community garden.

The mission of Benicia Community Gardens? "To encourage and enable local citizens to establish and care for gardens throughout the city that provide ongoing sources of healthful food, fellowship, beauty and discovery."

According to their website, the Avante garden is called that because "it represents an experiment not only to provide wider opportunity for more people to observe and practice organic urban farming, but also, because BCG will be making private, undeveloped property in the heart of our historic commercial district productively used for growing food."

Residents  lease individual plots and grow such foods as tomatoes, peppers, kale and cabbage. Ornamental flowers line the fence. Signs warn guests not to reap the benefits of what other have sown.

We stopped by there last Sunday afternoon and were amazed that despite the colder weather settling in, insects abound. We saw such pollinators as honey bees, a yellow-faced bumble bee, a hover fly, a carpenter bee and a green metallic sweat bee, as well as a pest, the spotted cucumber beetle. Assorted cabbage white butterfles, also pests, fluttered around the cucurbits.

What a treasure! A good place to spend part of a Sunday. 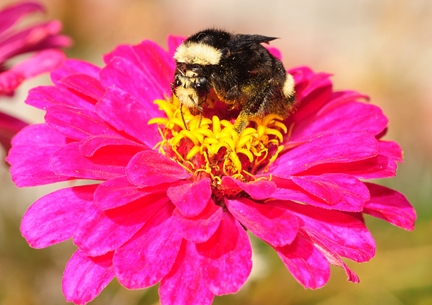 A yellow-faced bumble bee on a zinnia. (Photo by Kathy Keatley Garvey) 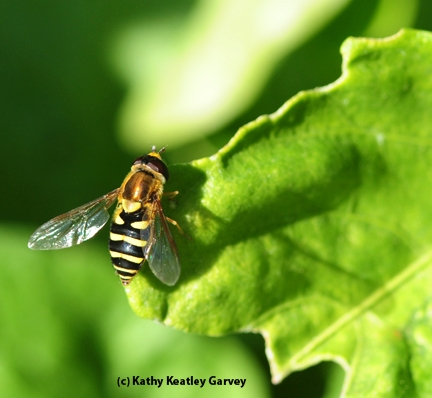 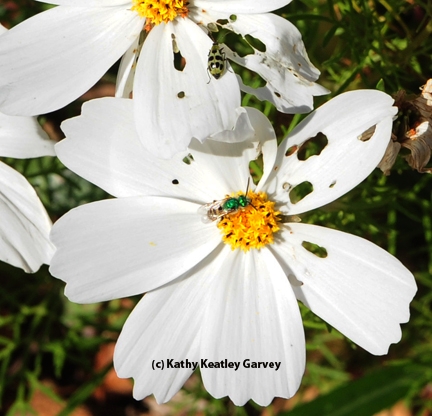 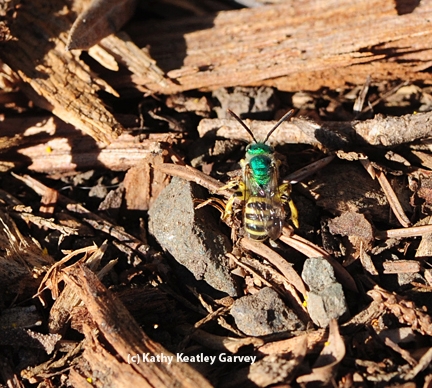 'Tis the season for the return of the insects.

Many a honey bee foraged in the flowering quince (Chaenomeles speciosa) last weekend. But wait, what's that? A spotted cucumber beetle (Diabrotica undecimpunctata) tucked inside a blossom.

Spotted cucumber beetles, which overwinter as adults, are major agricultural pests. The beetle is so named because of its preference for cucumbers (cucurbits), but just about anything will do before, during and after the cucumber crop. True, it gravitates toward other members of the cucurbits family, including squashes, gourds, pumpkins and melons, but it also goes after beans, peas, corn, potatoes, beets, tomatoes, eggplants, cabbage, and assorted ornamentals, such as roses and dahlias.

The yellowish-green beetle with black spots may look pretty tucked inside a flowering quince, but looks are deceiving. 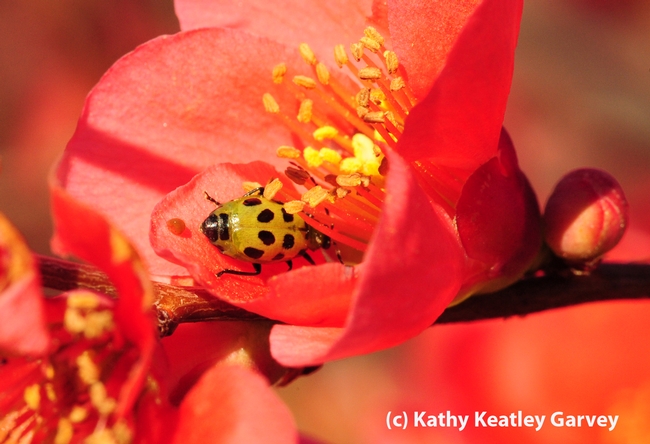 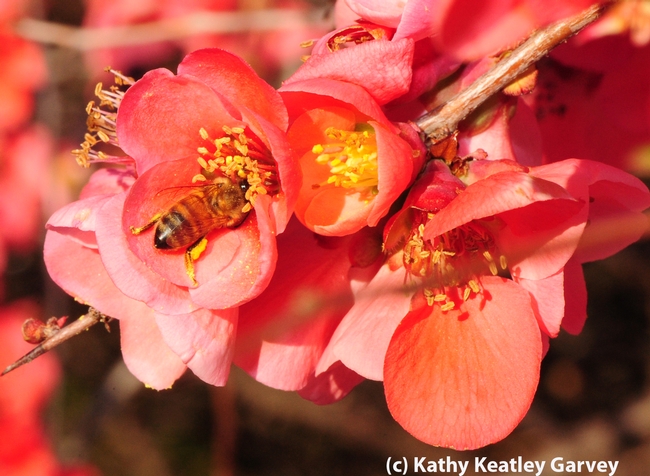 So you're walking through a sunflower field and you're seeing lots of honey bees foraging on the flowers.

But wait, look over there. Are those beetles?

The spotted cucumber beetle is known as a major agricultural pest, as it eats or damages the leaves of such crops as cucumbers, cotton, soybeans and beans.

Are the melyrid beetles pests of sunflowers? "Yes, in the sense that they are pollen eaters," says Lynn Kimsey, director of the Bohart Museum of Entomology and professor of entomology at UC Davis.

However, beetles can also be pollinators. And there's a word for that.

Beetle pollination is called cantharophily. And cantharophily "may be the oldest form of insect pollination," say emeritus professors Penny Gullan and Peter Cranston of the Department of Entomology, University of California, Davis, in their textbook,  The Insects, an Outline of Entomology.

As they point out in their book: "Beetles mostly visit flowers for pollen, although nutritive tissue or easily accessible nectar may be utilized  and the plant's ovaries usually are well-protected from the biting mouthparts of their pollinators." They mention several families of beetles that can be pollinators--among them Cantharidae (soldier beetles), Cerambycidae (longhorn beetles), and Cleridae (checkered beetles).

And they mention Melyridae, the soft-winged flower beetles, as being pollinators, too.

Cantharophily in the sunflower field. 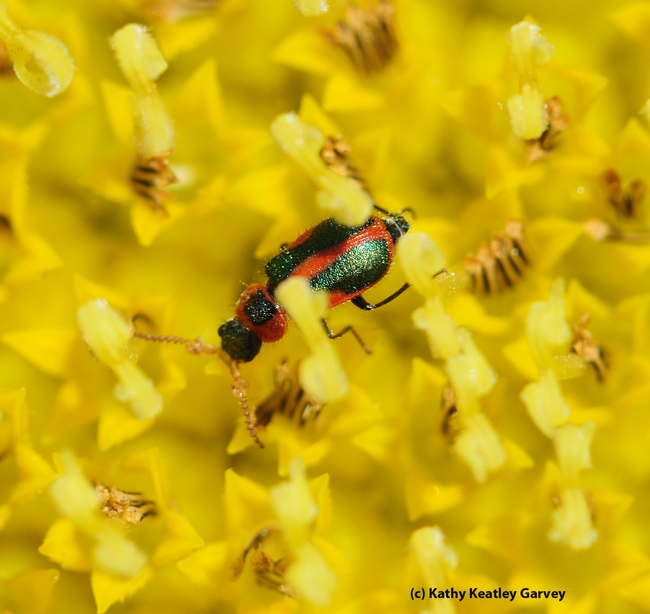 Melyrid beetle on a sunflower. (Photo by Kathy Keatley Garvey) 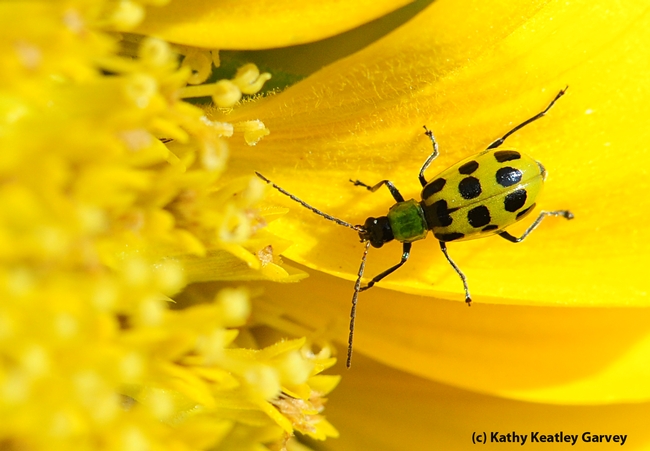 It was a pomegranate kind of day. Red, bright and wonderful.

The papery-thin reddish blossoms in our yard draw both beneficial and pestiferous insects. Honey bees are there for the pollen and nectar; ladybugs are there for the pesky aphids. Occasionally we see another pest, the spotted cucumber beetle (which prefers cucurbits).

The pomegranate, an ancient fruit native to Persia (what is now Iran), is a long-lived tree. Indeed, some pomegranate trees in Europe are more than 200 years old.  One in our yard spans 85 years.

Spanish settlers introduced the pomegranate into California in 1769, and today, the state leads the nation in the production of pomegranates. Agricultural statistics show that in 2010, California's San Joaquin Valley alone blossomed with an estimated 22,000 acres of pomegranates. That's about 200 trees per acre.

One of the primary pomegranate varieties is "Wonderful." The honey bees and ladybugs think so, too! 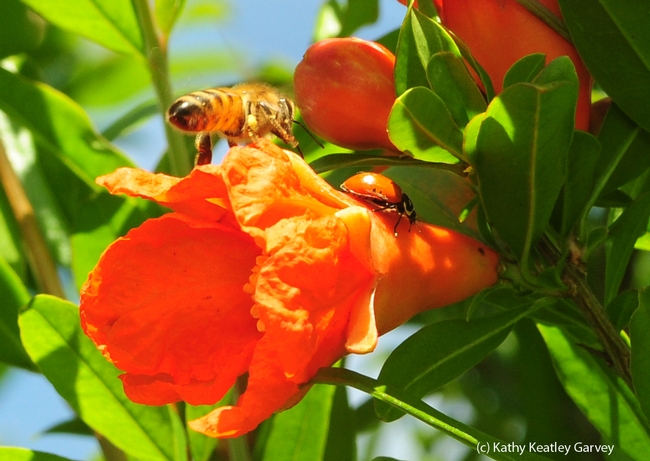 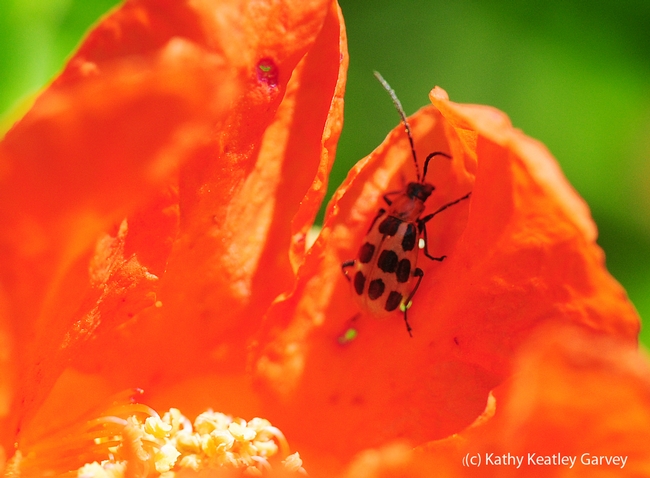 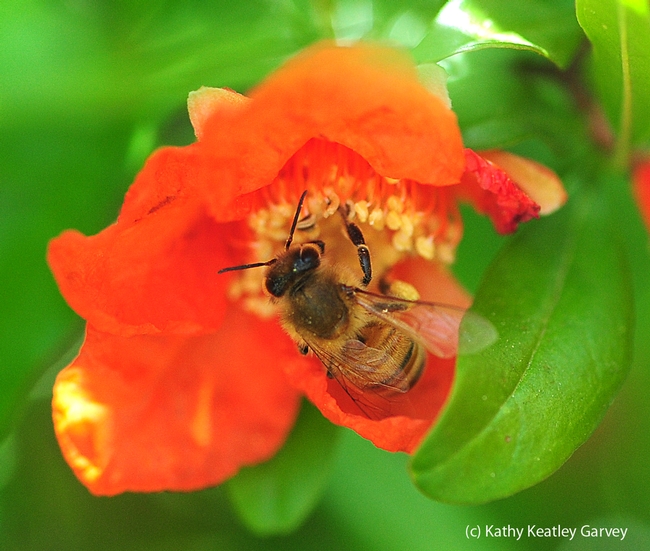 You usually see them crawling around, but never about to fly.

The Western spotted cucumber beetles (Diabrotica undecimpunctata) is one of California's most common insects. And though quite attractive in coloring, it's a major agricultural pest.

"Come in, my pretty," is probably what a witch would say during the Halloween season.

Retired UC Berkeley entomologist Jerry Powell, in his book, California Insects (co-authored by Charles Hogue), describes the adult as "bright green with six variable black spots on each wing cover and variable amounts of black on (the) legs and underside."

"They eat leaves and flowers of all kinds except conifers; (they're) particularly abundant on plants of the squash family."

They're found throughout California, except at the highest elevations, he says.

But have you ever seen this insect take flight?

We recently watched a spotted cucumber beetle crawl beneath a tangerine leaf and vanish. Suddenly, like a submarine periscope, its antennae appeared, twitchy rapidly. Then its head popped up.

That huge dark object (camera!) startled it, though. It took flight, landing a few feet away on the sidewalk.

With its wing covers open, it looked very much like a polka-dotted airplane on a runway. 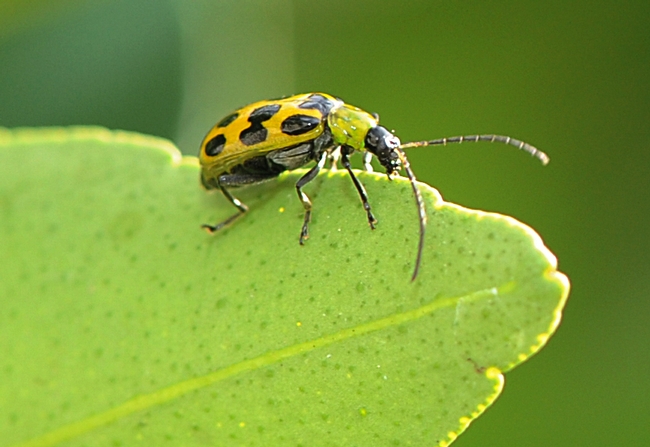 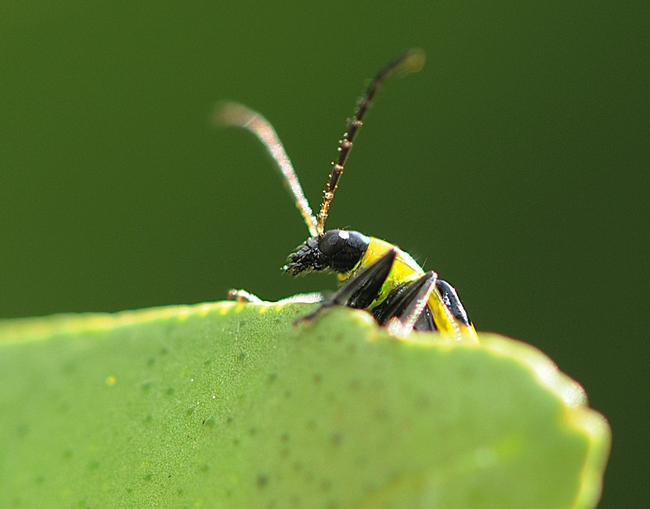 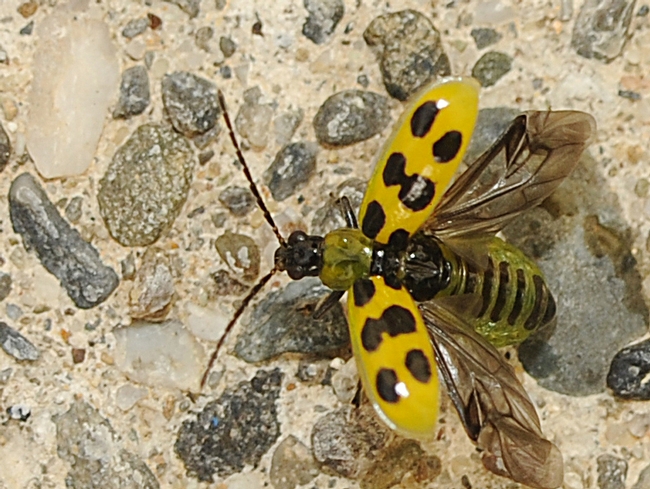