Marla Spivak (Photo by Dan Williams)
May is a few months away, but already there's strong interest in the line-up of speakers at the UC Davis Bee Symposium,  set Saturday, May 9 in the UC Davis Conference Center.

The all-day event will be presented by the Honey and Pollination Center and the Department of Entomology and Nematology.

The symposum is designed for beekeepers of all experience levels, including gardeners, farmers and anyone interested in the world of pollination and bees, said Amina Harris, director of the Honey and Pollination Center, housed in the Robert Mondavi Institute for Wine and Food Science. (See  news article.  To register, access this page.)

Keynote speaker is Marla Spivak, Distinguished McKnight Professor, University of Minnesota and a 2010 MacArthur Fellow.  Spivak will speak on "Helping Bees Stand on Their Own Six Feet."

Another speaker is Amy Roth, assistant professor in the  Department of Ecology, Evolution, and Organismal Biology, Department of Entomology, Iowa State University, Ames. She will be doing double-speaking duty when she makes the 1761-mile trip to UC Davis. Roth will deliver separate talks on honey bees and social wasps.  At the May 9th symposium, she'll speak at 11 a.m. on "Combined Effects of Viruses and Nutritional Stress on Honey Bee Health."

A few days later, on Wednesday, May 13, her topic will turn to social paper wasps. She'll present a seminar,  hosted by the UC Davis Department of Entomology and Nematology, on "Molecular Evolution in Insect Societies: Insights from Genomics of Primitively Social Paper Wasps" from 12:10 to 1 p.m. in 122 Briggs Hall, off Kleiber Hall Drive.

A little more about social wasps...

"The evolution of highly cooperative, eusocial behavior from solitary ancestry represents one of the major transitions in the evolution of life," she says. "Thus, understanding the evolution of insect eusociality can provide important insights into the evolution of complexity.  Recently, with the advent of the genomic era, there has been great interest in understanding the molecular underpinnings of social behavior and its evolution. Several hypotheses about how eusociality have been proposed; these ideas can be roughly divided into two camps—one proposes that eusociality involved new (novel, or rapidly evolving) genes, and the other, that old (deeply conserved) genes took on new functions via shifts in gene regulation."

Toth will provide an overview of recent research in her laboratory "aiming to address the genomic basis of social evolution in insects, with a focus on gene expression.  Utilizing a comparative approach involving multiple species and lineages of bees and wasps, as well as denovo sequencing of genomes,transcriptomes, andepigenomes, our work aims to trace the types of genomic changes related to the evolutionary transition from solitary toeusocial behavior."

Toth will present results from several lines of research mainly focused on primitively social Polistes paper wasps, that have led to the following insights:

"Although more data on additional solitary and social species, and on novel genes, are needed, the emerging picture is that earlier transitions from solitary to simple eusociality involved relatively small changes in gene expression and regulation," Toth points out.

All in all, it's going to be a busy week for Amy Toth. Honey bees first, on Saturday, May 9. The vegetarians. Then their cranky cousins, the social wasps, on Wednesday, May 13. The carnivores. 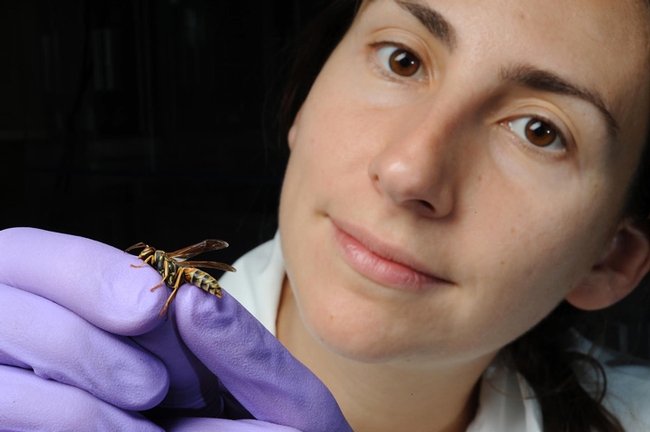 Neal Williams
It's a good cause.

The seventh annual Bee Symposium, a fundraiser for Partners for Sustainable Pollination, will take place on Saturday, March 9 in Sebastopol.

That's when five speakers will talk about pollinator habitat--what's good to plant and why. The theme is "Pollinator Habitat and Forage."

The event takes place from 8:30 a.m. to 4:30 p.m. in the Sebastopol Center for the Arts, located in the Veterans' Building at 282 South High St., Sebastopol.

Pollination ecologist Neal Williams, assistant professor of pollination and bee biology, UC Davis Department of Entomology and Nematology, will be among the speakers at the all-day event.

Williams will discuss "Development of Wildflower Mixes to Promote Native Pollination in Agriculture."

A core faculty member in the UC Davis Agricultural Sustainability Institute, Williams focuses his research on pollination that spans the disciplines of conservation biology, behavioral ecology and evolution.  One of his primary research foci is on sustainable pollination strategies for agriculture. This work is critical given ongoing pressures facing managed honey bees and reported declines in important native pollinators such as bumble bees.

He and his colleagues explore the role of wild native bees, honey bees and other managed species as crop pollinators and the effects of landscape composition and local habitat quality on their persistence.

Williams' continuing goal is to provide practical information that can be used to improve the long- term stability of pollination for agriculture in California, as well as promote pollinator conservation and management.

Other speakers at the symposium will include bee industry expert Peter Borst of Biomedical Sciences, Cornell University. He will deliver two talks: "A Short History of Pollination" and "Pollinator Panorama." Borst is a regular contributor to the American Bee Journal.

Farmer Paul Kaiser of the Singing Frogs Farm will cover “Farming for Pollinators: How Can We  Humans Produce Nutrient Dense Food While Improving the health, Vitality and Resiliency of Mother Nature?”

Tickets are $35 pre-sale or $45 at the door. Members receive a $5 discount. For more information or to purchase tickets, access http:// www.pfspbees.org/store or cash tickets may be purchased  at  Beekind, 921 Gravenstein Highway South., Sebastopol.

For general information, contact Jeanine Robbins at jeaninepfsp@gmail.com or (707) 824-2905. 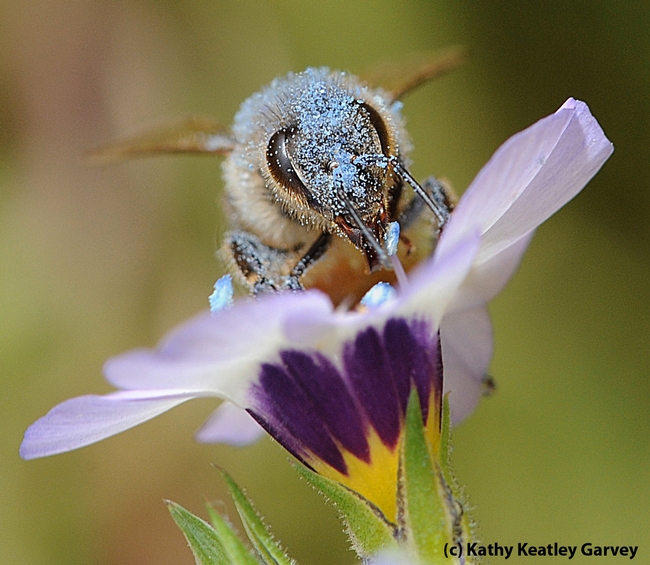 The Veterans' Memorial Hall in Sebastopol is the place to "bee" on Saturday, March 19.

That's when and where the fifth annual Bee Symposium will take place.
And and one of the speakers is none other than MacArthur Fellow Marla Spivak, professor of apiculture at the University of Minnesota.

Remember Marla Spivak? Last year she was singled out as one of the recipients of the $500,000 MacArthur or "genius" awards.

Marla Spivak will give two talks--one on "Socialized Medicine in Honey Bee Colonies" in the morning, and the other on "Bee Health and Breeding" in the afternoon.

UC Davis Department of Entomology faculty and staff have participated in the Bee Symposium for the past several years. They include Extension apiculturist Eric Mussen; native pollinator specialist Robbin Thorp, emeritus professor of entomology; and bee breeder-geneticist Susan Cobey.

Spivak has close ties to UC Davis. She studied with Thorp and other volunteer instructors at the 2010 The Bee Course, Portal, Ariz. This is an annual workshop intended for conservation biologists, pollination ecologists and other biologists who want to gain greater knowledge of the systematics and biology of bees. Spivak has also done research with Mussen and Cobey.

In her morning talk, Spivak will discuss propolis, which bees collect from tree resins and use as "glue."  However, propolis is more than just a glue, Spivak says. It helps the immune system of individual bees. And, she says, "we are also exploring the antimicrobial properties of propolis, using modern and analytical methods, to test the activity of different sources of propolis against bee viruses and bee bacterial pathogens."

In her afternoon talk, "Bee Health and Breeding," Spivak will cover hygienic behavior or how well bees detect diseases and parasitized brood in their colonies and remove the unhealthy brood. "We are now working one-on-one with commercial bee breeders in northern California to help them enhance their tried-and-true stocks by selecting for hygienic behavior," she says. "The goal is to maintain genetic diversity while improving mite disease and mite resistance in our bees."

Two other speakers are billed, and each also will present two talks. Acupuncturist Frederique Keller of Northport, N.Y., president of the American Apitherapy Society, will speak on “Medicinal Use of Raw Honey, Pollen, Propolis, Royal Jelly, Bee Bread and Beeswax” and “Bee Venom Therapy: Historical Perspective into Modern Applications.”

Retired physician Ron Fessenden of Colorado Springs, Co., author of “The Honey Revolution: Restoring the Health of Future Generations” and other books on honey, will speak on “The Revolutionary Effects of Honey on Human Metabolism” and  “How to Sleep Your Way to Better Health with Honey.”

For tickets, see the Beekind website or contact Katia Vincent of Beekind at beekind@beekind.com.  Proceeds will benefit three organizations: the Xerces Society of Invertebrate Conservation, the Foundation for the Preservation of Honey Bees and Partners for Sustainable Pollination.

So, if you want to learn more about bees and their products, this is definitely the place to "bee." 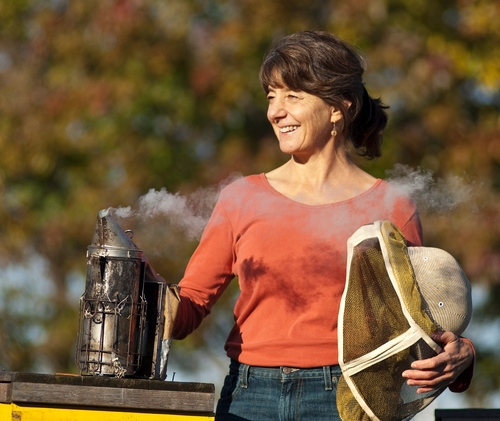 Marla Spivak
MARLA SPIVAK, one of the 2010 recipients of a MacArthur Fellowship or "Genius Award," will speak at the Bee Symposium, March 19, in Sebastopol. (Photo courtesy of Dan Marshall) 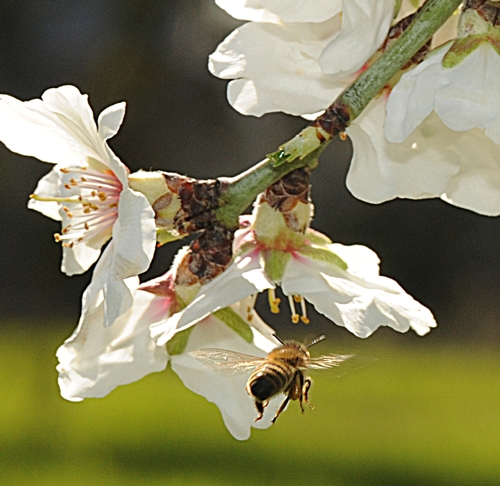 Robbin Thorp's many areas of expertise include the amazing diversity of native bees.

He'll discuss their diversity, nesting habits and nest site requirements when he addresses the 2010 Bee Symposium, sponsored by the Santa Rosa-based Partners for Sustainable Pollination (PFSP).

BSquadkathykellison
The conference, to take place from 9 a.m. to 5 p.m., Sunday, March 7 in the Subud Center, 234 Hutchins Ave., Sebastopol, will offer updates and new perspectives on honey bees and native pollinators.

Thorp, a native bee specialist and an emeritus professor of entomology at the University of California, Davis, "retired" in 1994, but not really. He still maintains his office at the Harry H. Laidlaw Jr. Honey Bee Research Facility, UC Davis, and continues to focus his research on the ecology, systematics, biodiversity and conservation of bees. He's involved in research on the role of native bees in crop pollination, the role of urban gardens as bee habitat, and declines in native bumble bee populations.

Last June he presented a talk at the Smithsonian Institution, Washington, D.C., on "Western Bumble Bees in Peril" and in August, addressed the Western Apicultural Society conference in Healdsburg on native bees.

The conference also will include information on beekeeping practices, innovative approaches and ecological strategies for beekeepers, Kellison said, "and actions that can be taken by beekeepers, groups and other interested supporters who wish to help our bees."

More information on the symposium, including registration, is on the PFSP Web site. 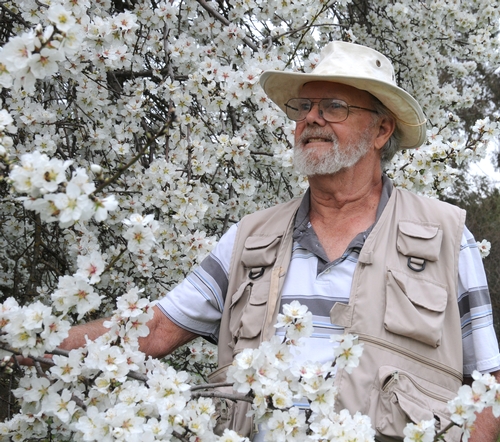 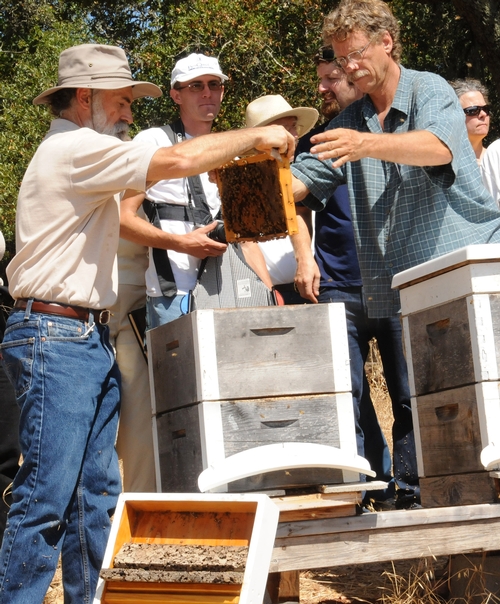