Bug Squad
sitenum=63
Happenings in the insect world
Bug of the Year!

If you're wondering which bug won "Bug of the Year" in Emmet Brady's Insect News Network (INN) radio poll, it's not the honey bee.

I once captured an image of that curious critter in the Storer Garden, UC Davis Arboretum (see below)

"This nominee is a personal favorite of the team @ The INN for it is bodacious!," Brady wrote on the INN website. He broadcasts INN on Wednesdays from 4 to 5 p.m. and Fridays from noon to 1 on KDRT 95.7 FM, Davis. You can also listen  online.

"Long-nosed bee flies (Bombylius major)  stay low to the ground are highly territorial and are easy to track," Brady wrote. "Unlike the majority of glyciphagous dipterans, the bee flies feed on pollen (from which they meet their protein requirements). A similar trophic behavior occurs among the hover flies, another important family of Diptera pollinators.

"Watching these flies argue over a flower or a patch of plants is pure enjoyment for the whole family.  While the Bombyliidae include a large number of species in great variety, most species do not often appear in abundance, and for its size this is one of the most poorly known families of insects. There are at least 4,500 described species, and certainly thousands yet to be described.  So if you pay attention and plant the right flowers, you may be able to create a Citizen Science project that is a little Hollywood and a little Natural History Museum.  You might even discover a new species, and then you can name it whatever you want!"

The first runner-up? The honey bee. Interesting that the long-nosed bee fly and the honey bee were "neck and neck" for awhile.

Brady is delighted that the bee fly won because it's a fairly unknown and unusual bug--a bugs that doesn't get much attention.

As for the honey bee, it's "the perennial candidate for the Bug of the Year (BOTY)," Brady says, acknowledging that the honey bee "perhaps the most important insect to human civilization."

You know which of the 25 nominees for Bug of the Year came in dead last?

The mosquito! It's "not last but not least..." It's "last and definitely least."

Nobody likes the mosquito. 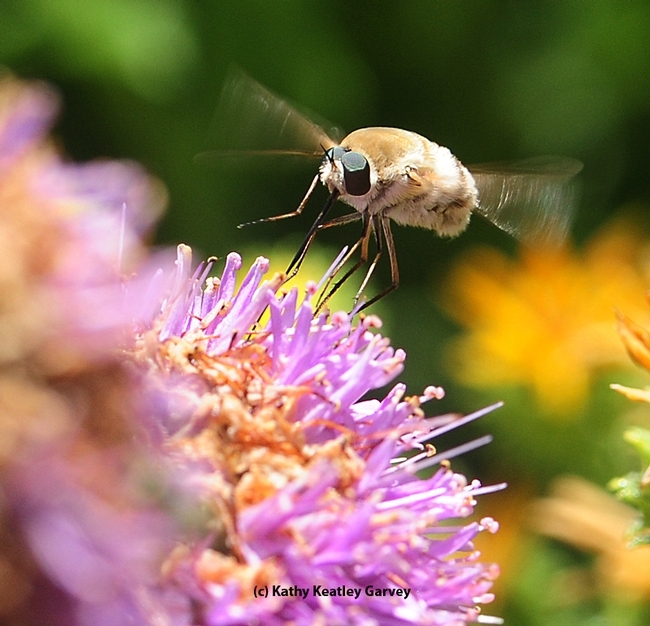