Steve Seybold specialized in the chemical ecology of forest insects.
The legacy of chemical ecologist Steven Seybold thrives with the recent publication of two papers by two of his UC Davis students.
Jackson Audley, who received his doctorate in entomology in 2019, and Crystal Homicz, a doctoral student in entomology, co-authored two research papers in the Journal of Agricultural and Forest Entomology:

The walnut twig beetle, in association with the fungus, Geosmithia morbida, causes the insect-pathogen complex known as "thousand cankers disease," which wreaks havoc on walnut trees. The insect, measuring about 1.5 millimeters long, is smaller than a grain of rice.

The two complementary papers shed more light on the invasive pest.  Both papers list Seybold, a pioneering scientist in the study of the beetle and the newly discovered disease that it causes, as a co-author.

"The first study is one of few bark beetle host selection studies conducted without the use of semiochemical lures," Audley said. "Together, both studies provide strong evidence for directed flight host searching and in-flight, host discrimination behaviors by Pityophthorus juglandis. These papers highlight sources of and provide an ecological context for potential non-host, volatile compounds that may be of use in semiochemical repellents to protect walnut trees from attack by P. juglandis." Jackson Audley, co-author
"Steve was a giant in the forest entomology community, particularly in the field of bark beetle chemical ecology," Audley said. "He was a great mentor and I am fairly confident I would not be half the scientist I am today without his guidance."
SaidHomicz: "Our papers highlight that the walnut twig beetle is highly skilled at discerning hosts in flight. Even when we attempt to lure them to non-host trees by tricking them with aggregation pheromone, more often than not, they correctly identify their host tree. This shows the beetle has evolved to be highly tuned into its  environment and the volatile profiles of its host species. Yet another example of how complex and advanced the insect olfactory system is! Future work may focus on identifying repellent chemical compounds released by the non-host tree species included in our studies." Crystal Homicz, co-author
"Not only was Steve a giant in the forest entomology community, but he was a giant in my life," Homicz commented. "I would not be studying forest entomology if not for him, and I am incredibly grateful he introduced me to my life's passion. Steve was highly committed to investing time and energy into young scientists. He was also committed to community outreach, I know he shared his love of trees and insects with many people!"

Seybold, who died Nov. 15, 2019 of a heart condition, was a researcher at the Pacific Southwest Research Station, USDA Forest Service, Davis, where he specialized in the chemical ecology of forest insects. He was also a lecturer and researcher with the UC Davis Department of Entomology and Nematology and mentored students.

Richard Bostock, distinguished professor, UC Davis Department of Plant Pathology, served as a co-author on both papers (in addition to Audley, Homicz and Seybold).

Audley is now a postdoctoral fellow funded by the Oak Ridge Laboratories, and based at the USDA Forest Service, Pacific Southwest Research Station, Davis.  While at UC Davis, Audley investigated behavioral chemicals that repel the walnut twig beetle from landing on English walnut trees. He conducted his research in a commercial orchard near Winters. He received the 2019 Western Forest Insect Work Conference (WFIWC) Memorial Scholarship Award for his research on the chemical ecology of the walnut twig beetle. He holds a master's degree in forestry (2015) from the University of Tennessee, and a bachelor of science degree in wildlife biology and natural resource recreation and tourism (2009) from the University of Georgia.

Homicz, who joined the UC Davis doctoral program in September 2019, received a bachelor of science degree in animal biology with an emphasis in entomology (2018) from UC Davis. Her practicum: "Landing Behavior of the Walnut Twig Beetle on Host and Non-Host Hardwood Trees Under the Influence of Aggregation Pheromone in a Northern California Riparian Forest."  She holds associate degrees in both biology and natural sciences (2016) from Shasta College. 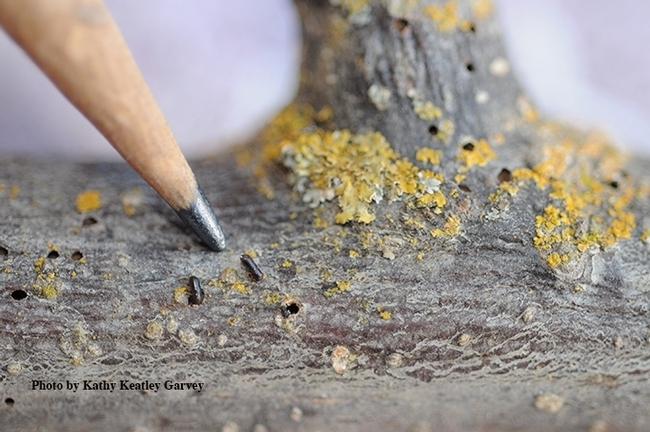 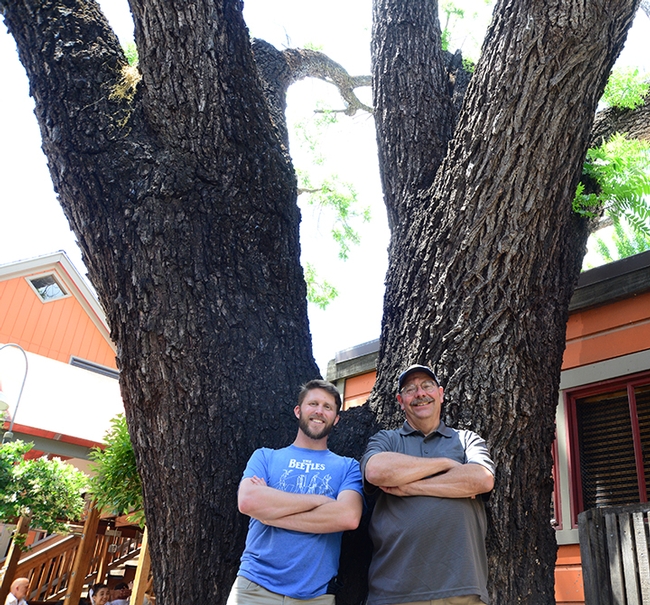 Forest entomologist Jackson Audley (left) with his mentor, the late Steve Seybold, in front of an infested tree in Davis, Calif. The walnut twig beetle, in association with a fungus, causes thousand cankers disease. (Photo by Kathy Keatley Garvey) 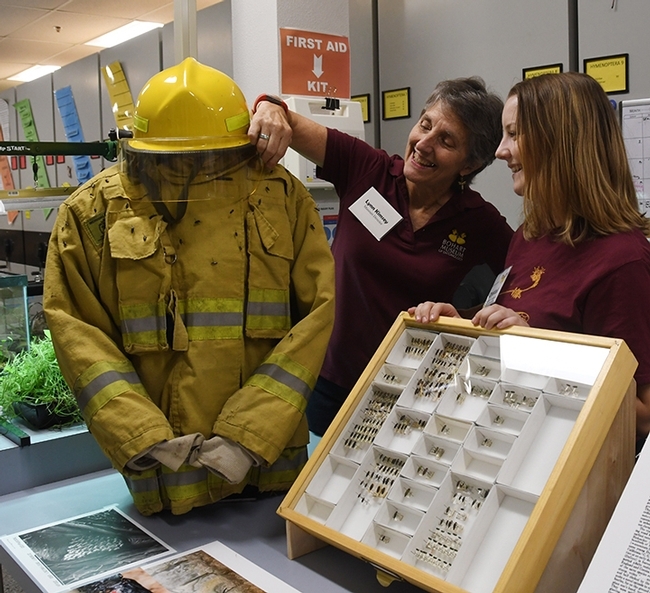 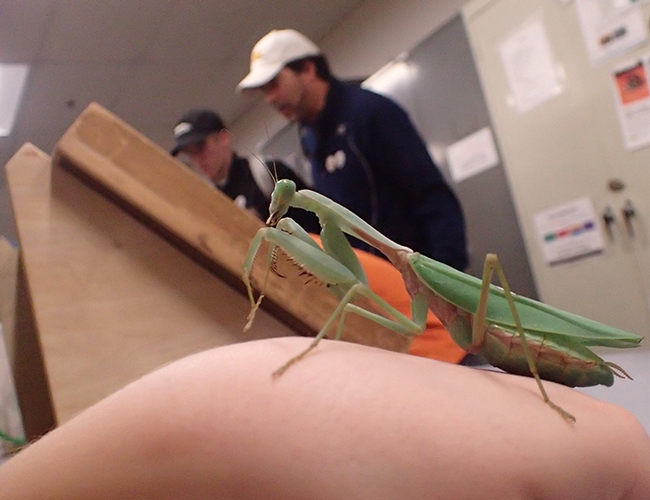 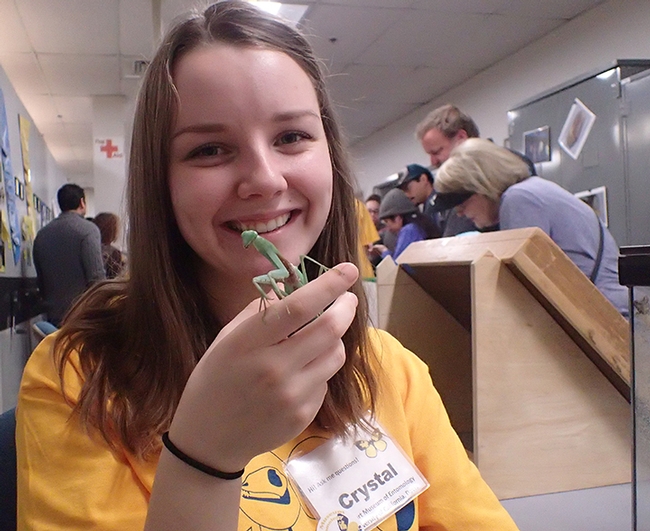 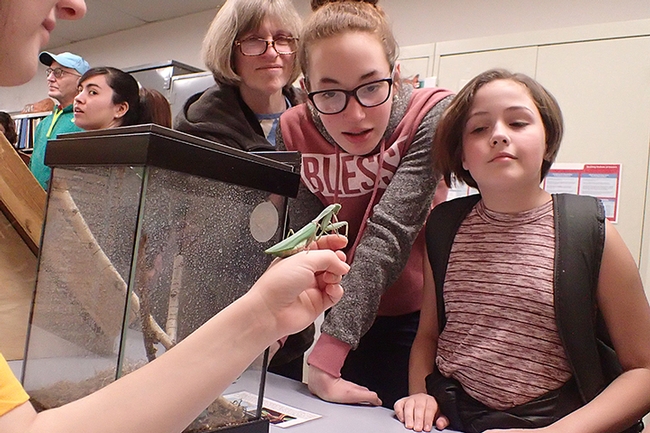 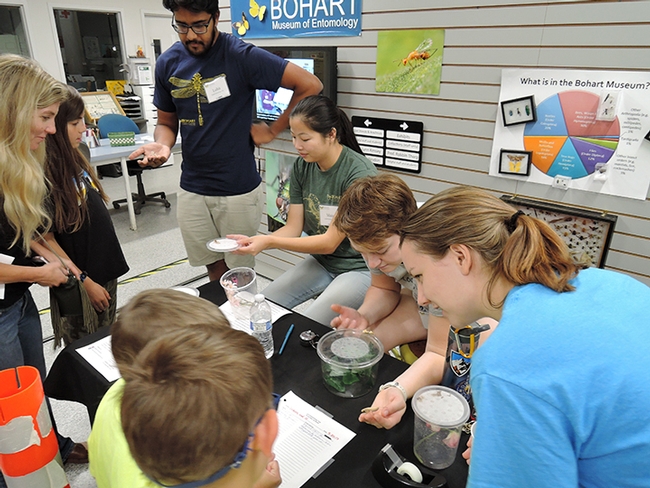 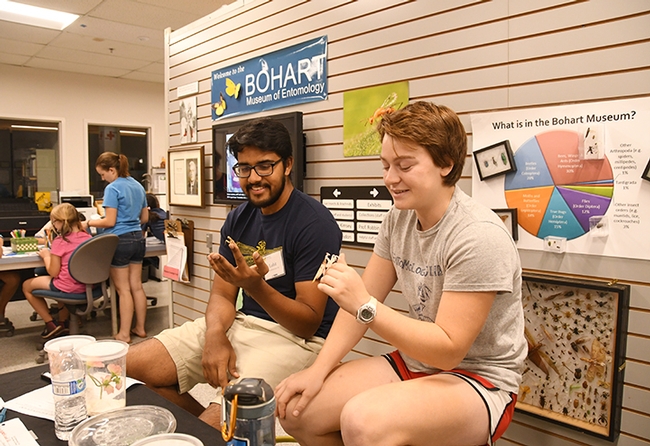 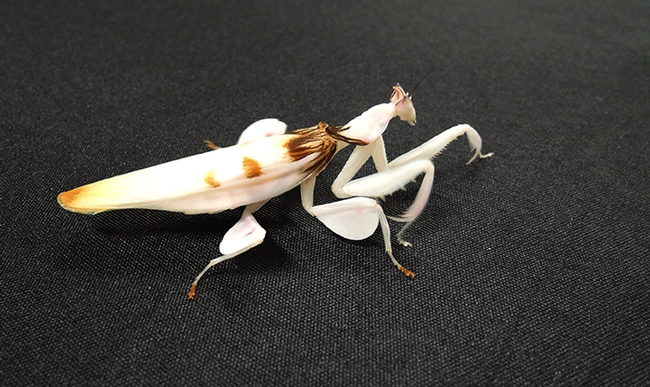 'Tis the season, but not the holiday season. This fir tree is part of the Bohart Museum of Entomology open house on bark beetles and forest health. From left are Steve Seybold lab associates Crystal Homicz and Megan Siefker. The open house is set or 1 to 4 p.m., Sunday, Aug. 27. (Photo by Kathy Keatley Garvey)
There are nearly 8 million insect specimens in the Bohart Museum of Entomology, University of California, Davis.

And no, it has nothing to do with the pending holiday season.

It's for the Bohart Museum's open house, “Bark Beetles and Trees, Forest Health in California," being organized by chemical ecologist Steve Seybold, a research entomologist with the USDA Forest Service, Pacific Southwest Research Station, Davis, and a lecturer/researcher with the UC Davis Department of Entomology and Nematology,

The open house, open to the public, with free admission and free parking, is set from 1 to 4 p.m., Sunday, Aug. 27 at the museum, located in Room 1124 of the Academic Surge Building, Crocker Lane.

The attendees will learn a lot about the beetles that are attacking our forests. 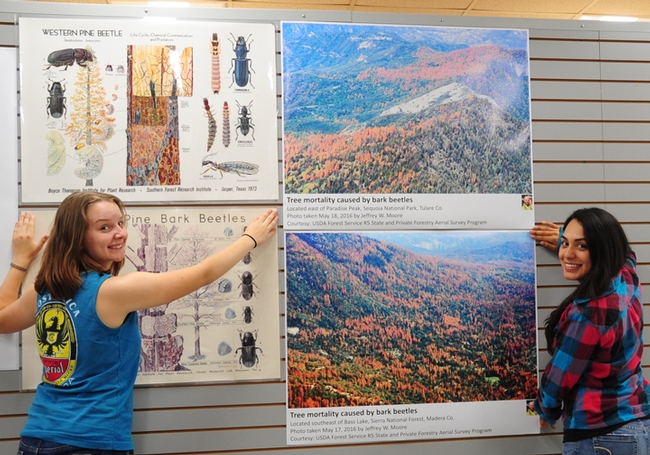 Hanging posters in preparation for the Bohart Museum of Entomology open house on Aug. 27 are Steve Seybold lab associates Crystal Homicz (left), a UC Davis undergraduate student and research assistant, and entomologist Megan Siefker, a junior specialist in the Seybold lab, UC Davis Department of Entomology and Nematology. Siefker received her bachelor's degree in entomology in December, 2014 and Homicz is majoring in animal biology. (Photo by Kathy Keatley Garvey) 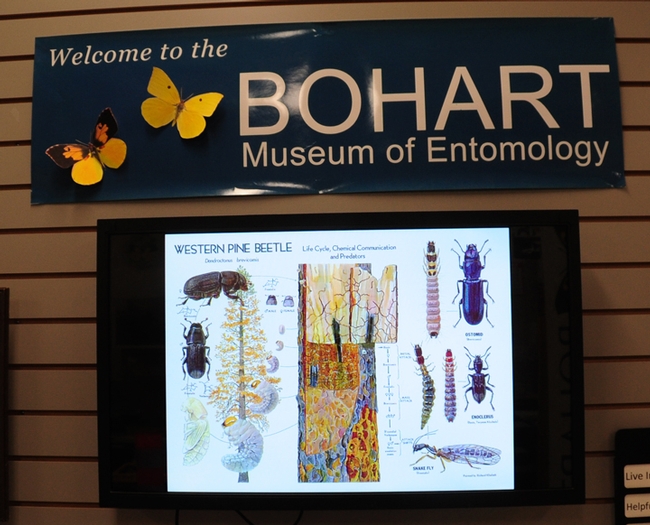