Bug Squad
sitenum=63
Happenings in the insect world
To Boldly Go, and the Chancellor Did: To an Insect Museum! Chancellor Gary May thumbs through a macro insect photography book, the work of Levon Biss from the Oxford Museum of Natural History, England. (Photo by Kathy Keatley Garvey)
“To Boldy Go.”

UC Davis Chancellor Gary May, a Star Trek enthusiast, coined that theme last year when he launched the university's 10-year strategic planning process. It's aimed at bringing together everyone's bold ideas to “propel us to accomplish things we've only dreamed of in the past.”

So does the chancellor “boldy go” into a museum with nearly eight million insect specimens and a live “petting zoo” of Madagascar hissing cockroaches, walking insects, scorpions, tarantulas and praying mantises?

He does. Of course, he does!

On Tuesday afternoon, Chancellor May and Helene Dillard, dean of the UC Davis College of Agricultural and Environmental Sciences--accompanied by a small contingent--toured the research-and-education-oriented Bohart Museum of Entomology in the Academic Surge Building on Crocker Lane.

May, an accomplished scholar/engineer/administrator and former dean of Georgia Institute of Technology's College of Engineering, became the seventh UC Davis chancellor on Aug. 1, 2017. Known as a dynamic and innovative leader, the chancellor today leads “the most comprehensive campus in the University of California system, with four colleges and six professional schools that offer 104 undergraduate majors and 96 graduate and professional degrees. UC Davis enrolls about 37,000 students, brings in nearly $800 million annually in sponsored research and contributes at least $8 billion to the California economy each year,” according to the UC Davis News Service.

The Bohart Museum traces its roots back to 1946 in Briggs Hall, where it began as a teaching-and-research tool--and began humbly, Kimsey told the entourage. It consisted of two Schmitt boxes but grew steadily with the help of several faculty members, students and donors. By 1969 the number of specimens had totaled more than 100,000. Today the global collection houses nearly eight million specimens.

The museum is named for its founder, celebrated entomologist Richard Mitchell Bohart (1913-2007), whose UC Davis career spanned more than 50 years.   He established the research-oriented collection in 1946--the same year he joined the UC Davis faculty--and contributed scores of specimens: Hymenoptera (bees, wasps and ants), Diptera (flies) and Strepsiptera (twisted wing parasites). He chaired the Department of Entomology from 1963 to 1976. He later served as major professor to a young entomology graduate student named Lynn Kimsey, eager to study the taxonomy of bees and wasps and insect diversity.  Kimsey, who received her doctorate in 1979, joined the UC Davis faculty in 1989, the same year she was named director of the collection. Like her mentor, she has also chaired the department (2008-2009). As they walked around the insect museum, Chancellor May and Dean Hillard admired trays of butterflies; watched students working on specimens; thumbed through a macro insect photography book by Levon Biss of the Oxford Museum of Natural History, England; and greeted the permanent and temporary residents of the petting zoo. Madagascar hissing cockroaches and walking sticks (stick insects) adorned the shoulders of UC Davis entomology student Wade Spencer, "zookeeper" of the petting zoo. He also cradled his favorite scorpion named Hamilton. Explaining that scorpions fluoresce under ultraviolet light, Kimsey illuminated Hamilton.  The arachnid glowed a blue-green neon; the glow comes from a substance in the hyaline layer, part of the scorpion's exoskeleton, they explained. Scorpions fluoresce or glow brightly under ultraviolet light. (Photo by Kathy Keatley Garvey)
UC Davis entomology student and Entomology Club secretary Lohit Garikipati, who rears praying mantises, displayed part of his collection, including Martha, an adult orchid mantis, Hymenopus coronatus. Martha? "Her sister is Mallow, since they are both the color of toasted marshmallows," he related.  Orchid mantises are endemic to Southeast Asia.


Children who visit the Bohart Museum delight in the petting zoo, Kimsey said.  Among the 2017 visitors: public and private school students; Girl and Boy Scouts; 4-H'ers; and youngsters from the Tulare County Office of Education's Migrant Education Program. Following their visit, most of the Tulare group, ages 8-11, vowed to become entomologists.

"All the kids are told when they come in that there are three words they are not allowed to use here," Kimsey said. "They are yuck, eww and gross."

But, she quipped, "they can say frass."

(Editor's Note: The Bohart Museum is open to the public Monday through Thursdays, 9 a.m. to noon and 1 to 5 p.m., and also holds weekend open houses periodically during the academic year. Admission is free. The Bohart will be open on Saturday, Feb. 17 from 9 a.m. to 1 p.m. as part of the campuswide (and free) Biodiversity Museum Day, featuring 13 museums or collections.) 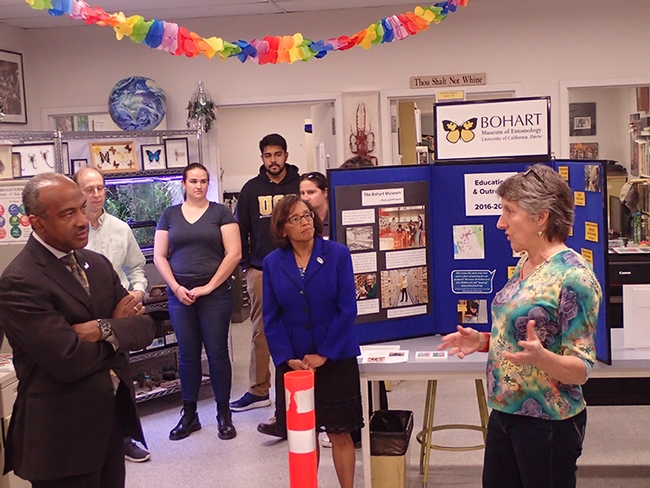 Lynn Kimsey (far right), director of the Bohart Museum of Entomology, talks about the history of the insect museum to UC Davis Chancellor Gary May and Dean Helene Dillard (center) of the College of Agricultural and Environmental Sciences. In back are Steve Nadler, chair of the Department of Entomology and Nematmology; undergraduate students Emma Cluff and Lohit Garikipati and Nann Fangue, current chair of the Wildlife, Fish and Conservation Biology Department. (Photo by Kathy Keatley Garvey) 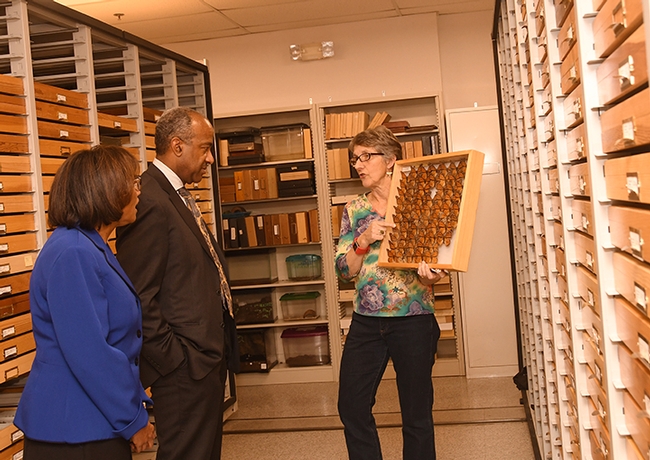 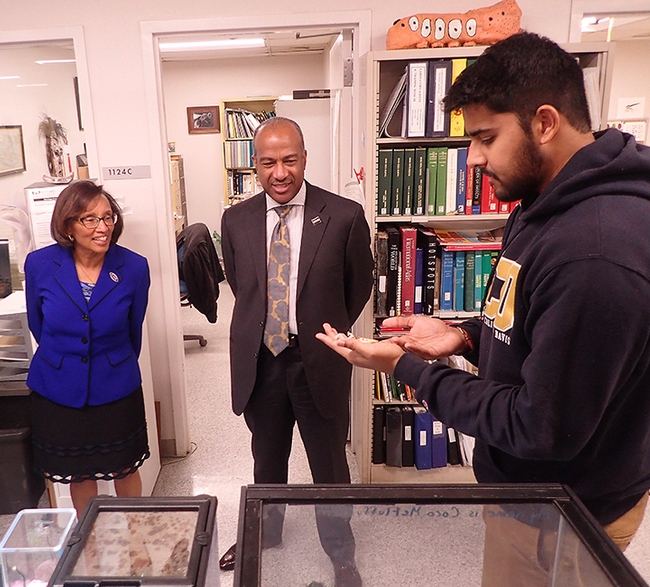 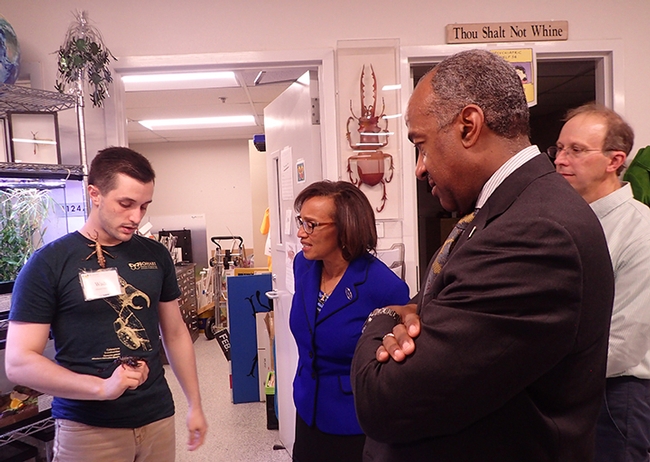 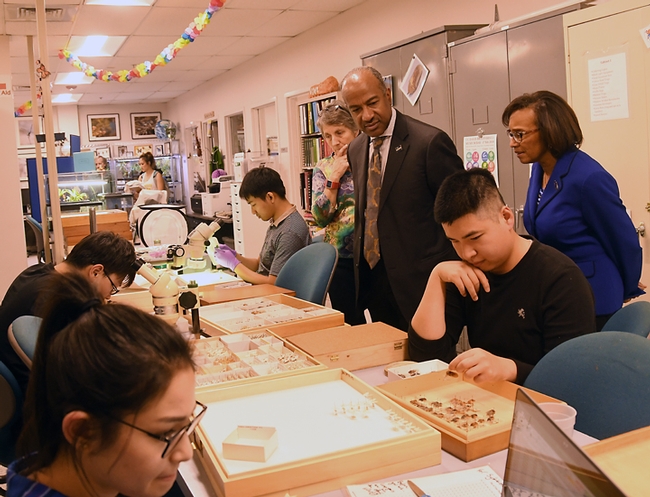