A native bee, Megachile fidelis. (Photo by Kathy Keatley Garvey)
It's all about knowing the biodiversity in Knowland Park.

And trying to save it from development.

Scientists and citizen-scientists will gather Sunday, June 1 in the western highlands of the Oakland park to conduct a "bioblitz"--or a tally of the biodiversity of animals and plants living there.

"The Oakland Zoo is planning to bulldoze and build upon 56 acres of the most sensitive habitat, which will demolish pristine stands of maritime chaparral and native grasses, destroy over 50 mature trees including heritage oaks, and fence out wildlife that depends on this land to survive," said Constance Taylor of www.wildoakland.org  in a news release issued today.

"Rare maritime chaparral and native grasslands alongside coastal scrub and oak woodlands comprise interconnected ecosystems with spectacular diversity: Hundreds of species of lichen, moss, and fungi (including a 100+ year-old giant puffball “fairy ring”), fields of wildflowers and many other California native plants, from ground cover to shrubs and trees," she said.

"These habitats sustain a multitude of wildlife species—insects, reptiles (including the federal and state protected Alameda whipsnake), resident and migratory birds, and an array of mammals—from the lowly dusky-footed woodrat (a California Species of Special Concern) to the top of the food chain, our native mountain lion." The pipevine swallowtail, Battus philenor, may be among the butterflies found during the bioblitz. (Photo by Kathy Keatley Garvey)
The event, open to people of all ages and skills, will begin at 9 a.m. with registration at the Cameron Avenue entrance, a cul-de-sac off of Malcom Avenue that dead-ends at the park. The bioblitz will take place from 9:15 to noon, and a wrap-up session is set from noon to 1:30. See website for more information and to sign-up.

And insects? "Yes, we are definitely looking for bugs," said bioblitz leader/entomologist Eddie Dunbar, founder and president of the Insect Sciences Museum of California  (ISMC). "The same evening we will be sheetlighting for nightflying insects. Moths will be out, of course. However, it has been suggested that there may be a vernal kind of riparian area. If so, we want to see what aquatics we can attract. Also, there would be sampling during the day for aquatics, if they are there. During the day we will sweep, beat, poot, and check underneath ground debris for insects. We want to make a case that this area deserves protection."

Entomology graduate and undergraduate students and enthusiasts at the University of California, Davis, are expected to be among those participating. Dunbar hopes that the participants will find many insects, including native bees. Anyone interested in helping out can email Eddie Dunbar at eddie@bugpeople.org. 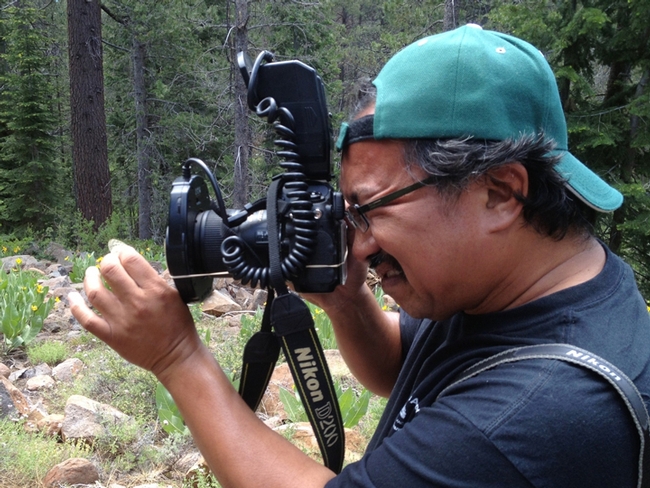 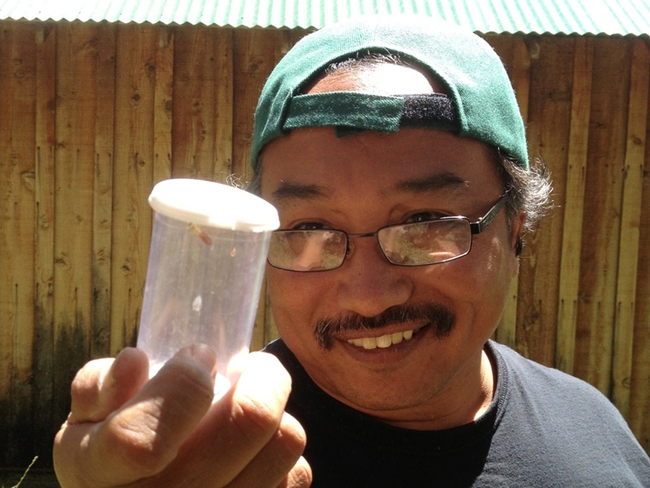 Monarchs and milkweed are in the news again.

As well they should be.

The declining monarch population, coupled with the decreasing scarcity of their host plant, the milkweed, is disturbing. The larvae of the monarch butterfly (Danaus plexippus) feed exclusively on milkweeds. No milkweed, no monarchs.

Butterfly expert Art Shapiro, distinguished professor of evolution and ecology at UC Davis, says the problem hasn't totally reached California yet. "The 'dearth of milkweed' problem is primarily an East/Midwest problem, due to increased use of Roundup since the introduction of 'Roundup-ready' GM crops. It's quite real. There is no such problem out here--at least yet--but there is a new milkweed pathogen that may cause one! Dave Rizzo (UC Davis Department of Plant Pathology) and I hope to publish on it shortly. No harm in planting milkweeds, but the problem isn't a California one, at least not yet."

Journalist-photographer Alessandra Bergamin, writing in the Feb. 18 edition of Bay Nature: Exploring Nature in the San Francisco Bay Area, says that "the number of monarchs overwintering in Mexico's Oyamel fir forest has reached an all-time low," quoting the World Wildlife Fund in Mexico. "The reports suggest that factors such as loss of habitat, climate change and use of insecticides have contributed to the decline."

The situation in California, however, looked better than bleak last year. A little better. "Monarch butterfly populations in California's coastal overwintering sites showed a slight — and surprising — rebound in 2013 after more than a decade of dwindling numbers," Bergamin wrote. "The 2013 Western Monarch Thanksgiving Count tallied 211,275 monarchs at 162 sites from Sonoma County to San Diego County, up from 144,812 the year before."

Over the past two decades, however, the Western monarch population has dramatically declined in California, she pointed out in her article, "Western Monarch Population Hanging On."  The downward trend is expected to continue.

Meanwhile, the Xerces Society for Invertebrate Conservation, headquartered in Portland, Ore., has posted a seed finder resource so folks can find milkweed seed in their state and plant the seeds in their gardens, parks, landscapes, restoration areas and on farms.

Oakland parks supervisor Tora Rocha is taking it one step further. She is collecting the monarch caterpillars, rearing them, and releasing the adults in the Lakeside Gardens at Lake Merritt.  Her newly formed Pollinator Posse has sparked the interest of volunteers, who range from school children to city council members. They all want to save the monarchs.

Rocha bans pesticides and herbicides from her pollinator gardens. “For the past fifteen years the gardens have had a pesticide-and herbicide-free policy,”  Rocha told writer Constance Taylor of Wild Oakland, which offers free, Oakland-centered environmental education.  “We also rely on volunteers contributing thousands of hours to keep our parks maintained--about 75% of the work is done by volunteers.”

Rocha says it's not enough to be a custodian of the land: it's important to be a steward of the land and protect the pollinators.  She's created a video, posted on YouTube, that explains what she and the other Pollinator Posse members do.

Another person keen on butterflies is Sally Levinson of Berkeley, who writes a blog on butterflies and is publishing educational videos, including "Secret Lives of Monarchs" and "In the Company of Wild Butterflies."  As a graduate student at UC Riverside, Levinson studied with major professor Bruce Hammock, now a distinguished professor of entomology at UC Davis. (He maintains a joint appointment with the Department of Entomology and Nematology and the UC Davis Comprehensive Cancer Center.)

As an aside, the Bohart Museum of Entomology at UC Davis offers a "Got Milkweed?" t-shirt spotlighting the monarch and its host plant. The work of doctoral candidate Fran Keller and Bohart volunteer/naturalist Greg Kareofelas, the t-shirt is  available online or at the museum, located in Room 1122 of the Academic Surge building on Crocker Lane. 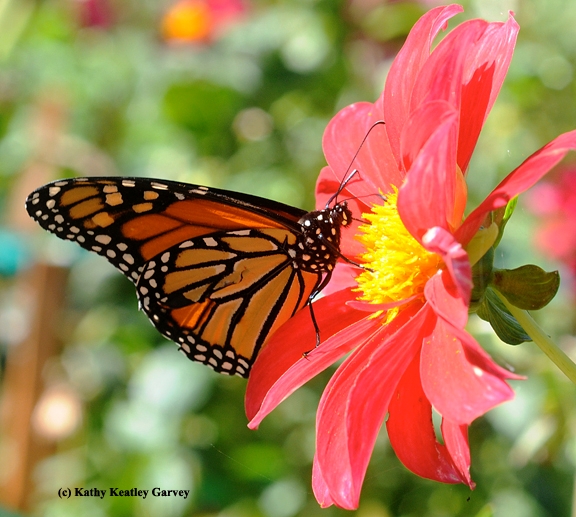 A monarch butterfly nectaring on a zinnia. (Photo by Kathy Keatley Garvey) 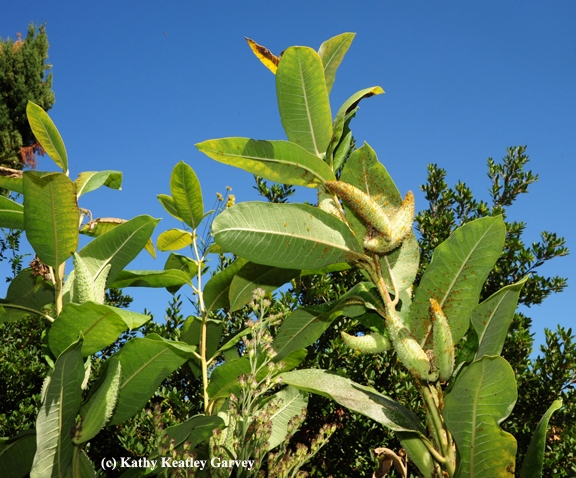 This is a milkweed, the host plant of the monarch. This photo was taken in the Melissa Garden, Healdsberg. http://www.themelissagarden.com/ (Photo by Kathy Keatley Garvey)
Tags: Art Shapiro (217), Danaus plexippus (45), Eddie Dunbar (3), milkweed (40), monarch butterflies (76), Robbin Thorp (248), Tora Rocha (9)
Comments: 1
The ABCs of the Bee-a-Thon 3 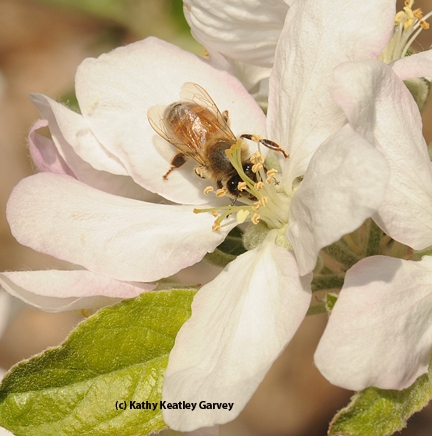 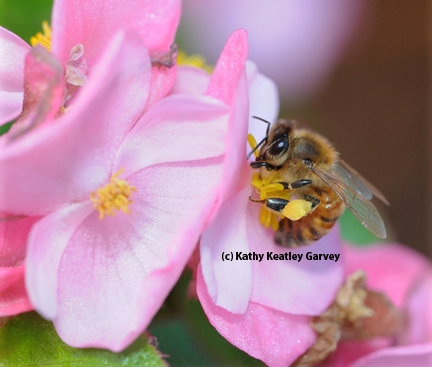 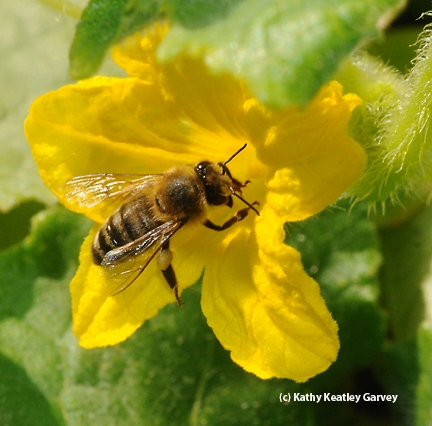