Bug Squad
sitenum=63
Happenings in the insect world
Ever Seen a Wasp Colony in a Frog's Mouth? But have you ever seen a frog's mouth filled with an entire European wasp colony?

Check this out! On Aug. 8, sharp-eyed Adrienne R. Shapiro of Davis spotted a colony of European paper wasps, Polistes dominula, nesting in the mouth of a garden frog statue in The Cannery neighborhood, Davis.

She shared several images with us. In the large image below, "you can see the paper nest inside the mouth," noted husband Art Shapiro, UC Davis distinguished professor in the Department of Evolution and Ecology.

Incredible image! And what a mouthful.

Passersby may think these insects are yellowjackets nesting in the frog statute, but they are not. They are European paper wasps. "The first North American occurrence of P. dominula was reported in Massachusetts in the late 1970s, and by 1995, this species had been documented throughout then northeastern USA," according to Wikipedia. "Behavioral adaptations of P. dominula have allowed it to expand outside its native range and invade the United States and Canada. While most Polistes species in the United States feed only on caterpillars, P. dominula eats many different types of insects."

In one of her Fact Sheets on the Bohart website, Kimsey writes: "Although they all belong to the same family of wasps, Vespidae, they build quite different kinds of nests. Paper wasps in the genera Polistes and Mischocyttarus build open-faced nests, where the individual cells are exposed. Hornets and yellowjackets build cells in separate combs that are all enclosed in a paper shell or shroud. Yellow jackets tend to build their nests in cavities. Hornets often create spherical free-hanging nests, but will also build nests in colonies."

Now if a frog statue could talk..."Jumping Jehoshaphat! One more wasp in my mouth and I'll croak!" 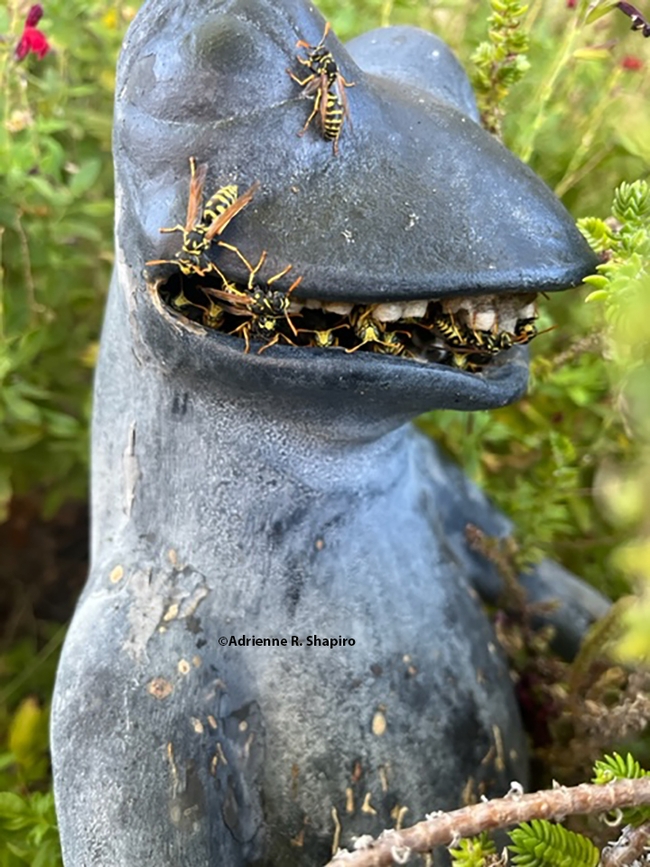 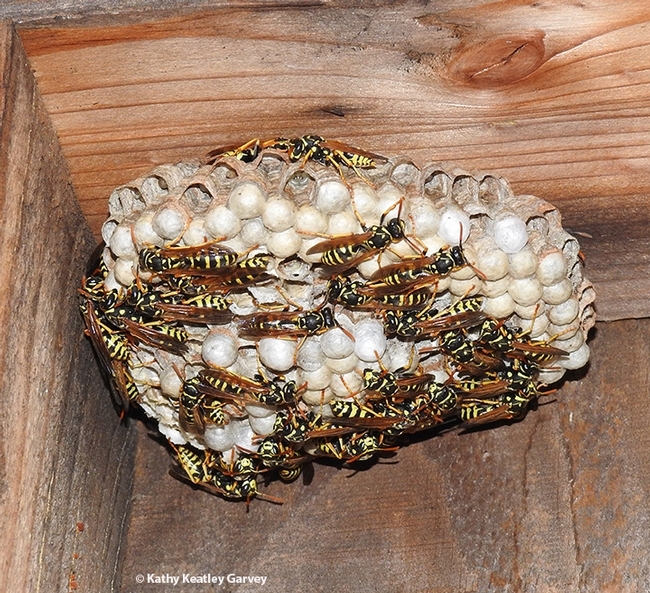 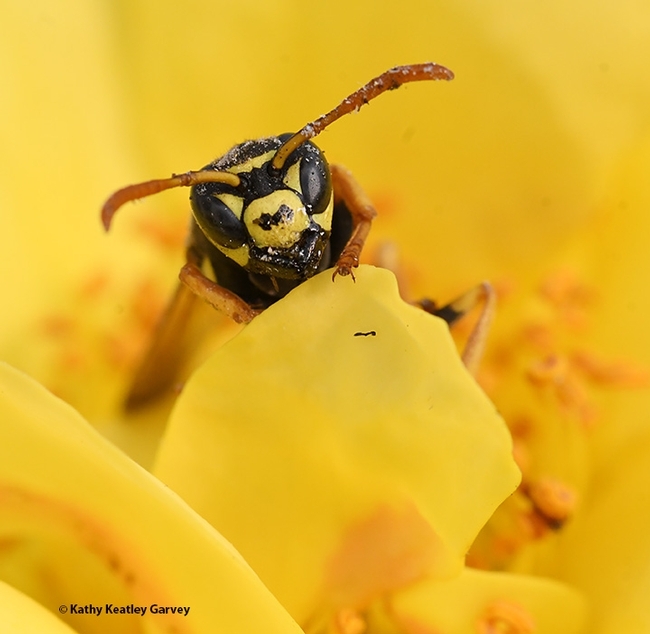 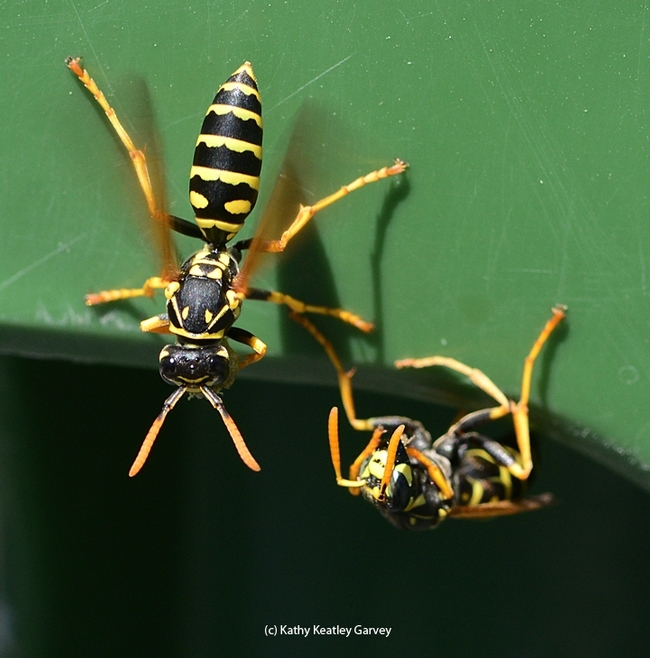 European paper wasps exiting a nest in a recycling bin at the University of California, Davis. (Photo by Kathy Keatley Garvey) 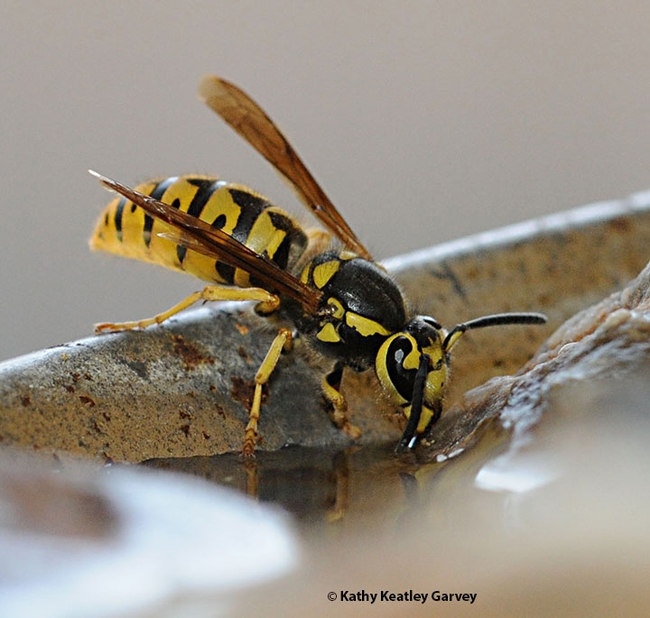 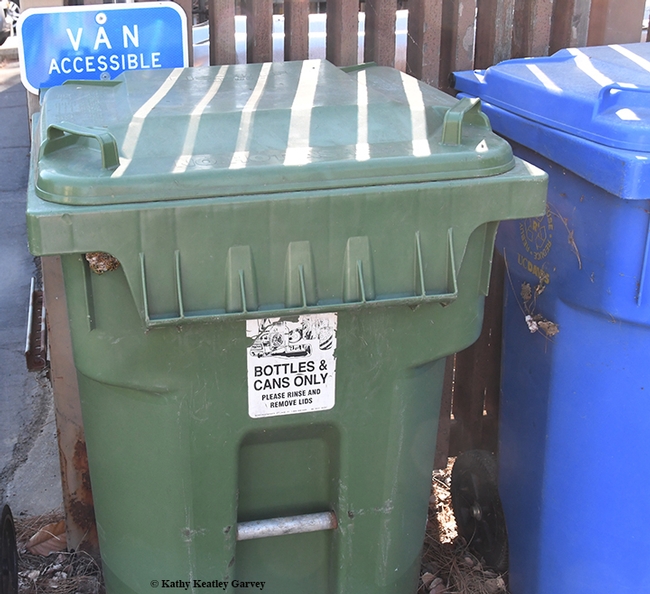 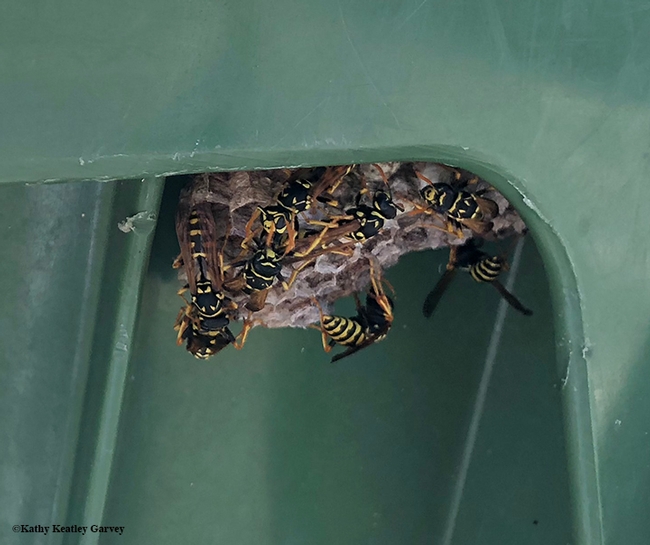 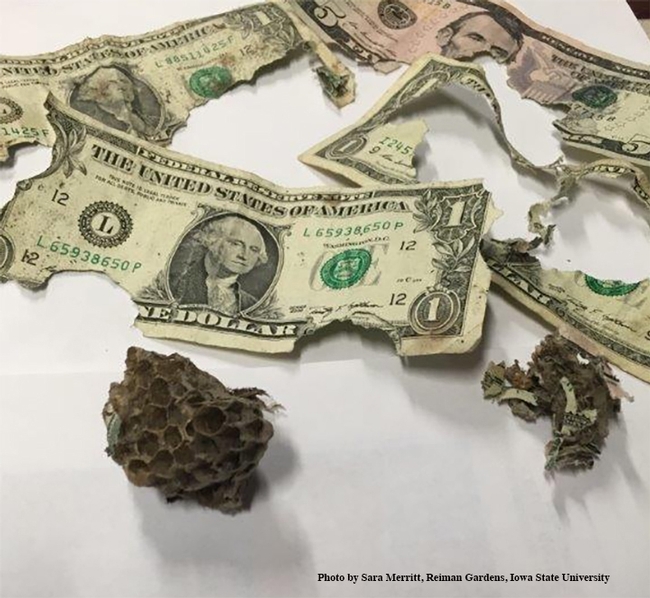 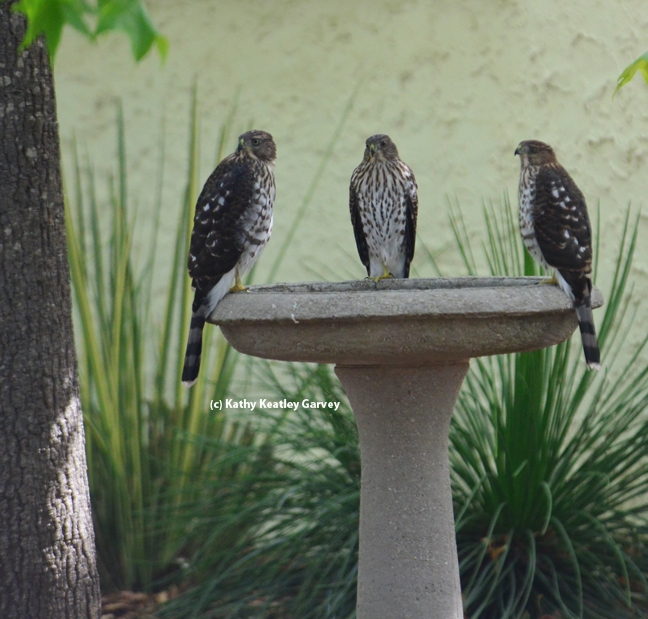 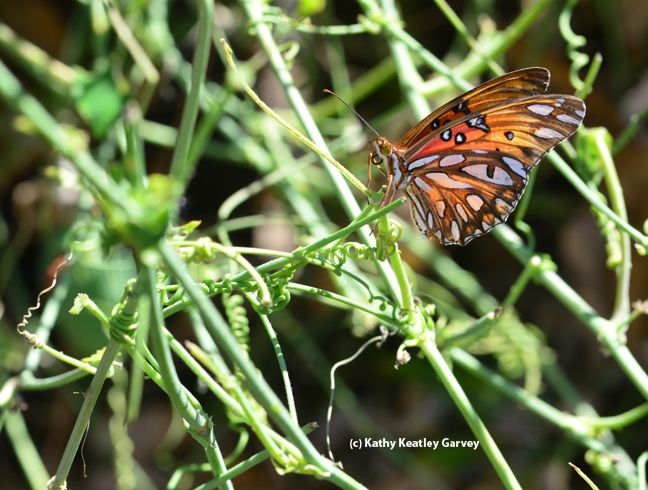 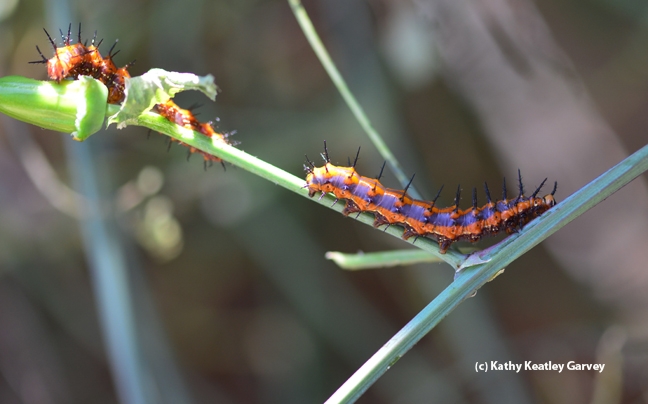 Izzo, who finished her doctorate in ecology and evolutionary biology last year at the University of Michigan, where she worked with Elizabeth Tibbetts on wasp communication and sexual selection, will speak on "Spotting the Top Male: Sexual Selection in a Lekking Paper Wasp." (Lekking means to engage in courtship displays.)

The seminar is sponsored by the Animal Behavior Graduate Group, which is hosting a series of winter-quarter seminars every Friday at noon in 6 Olson Hall. The series began Jan. 13 and will continue through March 16.

“Sexual selection has seen many advances over the past several decades, yet many questions remain,” said Izzo in her abstract. "Polistes dominulus paper wasps are a good system in which to study sexual selection, as males have a lek-based mating system and sexually dimorphic abdominal spots.

“Here, I demonstrate that these spots are used in both inter- and intra-sexual selection. Males with smaller, elliptically-shaped spots are more dominant over male rivals and are more preferred by females than males with larger, irregularly shaped spots. Additionally, the spots are condition-dependent and advertise quality.

“Further, spots function as signals: males with experimentally reduced abdominal spots win a greater proportion of fights and are preferred by females as mates over control males.  Finally, female choice for attractive spots results in direct benefits to females.  Females mated to males advertising high quality survive hibernation longer than females mated to males that advertise low quality.   These results demonstrate that male ornaments are an important mediator of mating dynamics in paper wasps, and that females can gain direct benefits in non-economic mating systems. ”

Last summer we spotted her subject--Polistes dominulus--on a leaf in our backyard.

Lynn Kimsey, director of the Bohart Museum of Entomology and professor of entomology at UC Davis, confirmed the identification. "Note the clean black and yellow coloration and the two circular spots on the second abdominal segment," she said.

(Michigan State University has some interesting information posted on this wasp. It's an Old World Species with a native range from Europe to China. It was first discovered in the United States--Cambridge, Massachusetts--in 1981.)

About Mandy Izzo: she initially accepted a postdoctoral researcher position in the UC Davis Department of Entomology involving honey bees but is now affiliated with the UC Davis Wildlife, Fish and Conservation Biology and hopes to work on animal coloration projects. 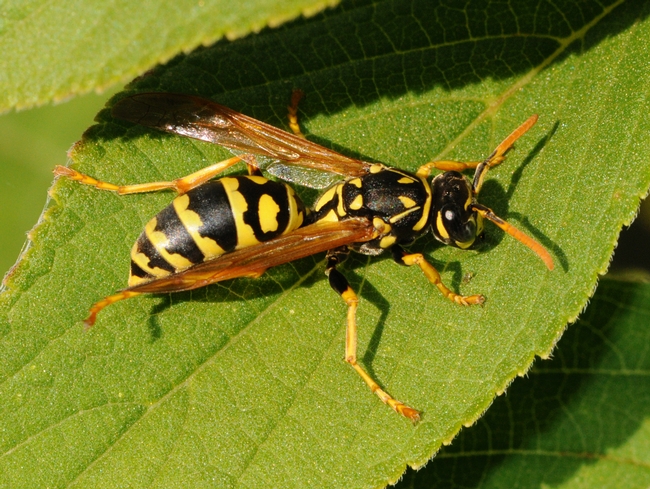