The rain beetle burrows out of the soil with its shovel-like apparatus. (Photo by Kathy Keatley Garvey)
Ah, rain!

If you've never seen a rain beetle (genus Pleocoma) no worries. Most people haven't, either. You have to be in the right place at the right time, which amounts to being in a fall or winter rainstorm in their habitat before sunrise or just after sunset. And you have to work quickly. The males can fly only a couple of hours before they die. The females are flightless.

We saw our first--and last--rain beetles back in October of 2012 when a graduate student in the UC Davis Department of Entomology and Nematology showed us several that a friend had been collected in the Shenandoah Valley of Plymouth, Amador County.

What intriguing insects! They spend most of their lives in immature stages beneath the ground, and that can total a decade or more, scientists estimate. The adults surface when the ground is soaked.

You'll never seen adult beetles eat because they don't. They have no mouthparts or digestive tracts. They rely on the fat stored from their larval stage.

The females emit a pheromone so the males can locate them. It's a hurry-hurry-hurry scenario.  Arthur Evans and James Hogue, authors of Introduction to California Beetles (University of California Press, Berkeley) say that “on average, males of some rain beetles have only enough energy stored as fat to give them about two hours of air time and live only a few days. The more sedentary females require less energy and may live for months after fall and winter storms.”

In California, "Pleocoma is found only in foothill and mountain habitats, never on the valley floor that I know of,” Lynn Kimsey director of the Bohart Museum of Entomology and professor of entomology at UC Davis, told us. “A lot of the populations have been extirpated by housing developments. When I was a kid living in the Berkeley Hills in El Cerrito we had lots of males flying after every rain but once the neighborhood was built up they vanished.”

“California's rain beetles occur throughout the mountainous regions of the state, except in the deserts,” according to Evans and Hogue. Their excerpt on rain beetles is published on the website of the Hastings Natural History Reservation in Carmel, Monterey County. “Small, isolated populations also occur in the Sacramento Valley and the coastal plain of San Diego County. The known modern distribution of these apparently ancient beetles is restricted by the flightless females and is more or less correlated to areas of land that have never been subjected to glaciation or inundation by inland seas during the last two or three million years.”

As underground larvae, these insects feed on shrub and tree roots, fungi and other organic matter.  Larvae can be pests when they attack the roots of apple, pear and other orchard trees.

Evans and Hogue describe the rain beetles as “large, robust, and shiny.”

And hairy. Indeed,  Pleocoma is Greek for abundant hair.

“The thick layer of hair covering the undersides," they write, "is remarkably ineffective as insulation, especially for flying or rapidly crawling males who must maintain high body temperatures in cold, damp weather….the thick pile probably functions to protect both sexes from abrasion as they burrow through the soil. Males and females dig with powerful, rake-like legs and a V-shaped scoop mounted on the front of the head.”

“In most species of rain beetles, male activity is triggered by weather conditions that accompany sufficient amounts of fall or winter rainfall or snowmelt in late winter or early spring. Depending upon circumstances, males may take to the air at dawn or at dusk, or they may fly during evening showers. Others are encountered flying late in the morning on sunny days following a night of pouring rains, or during heavy snowmelt.”

Evans and Hogue say the males fly low to the ground searching for females. They are often attracted to lights (including porch lights) and pools of water. “Females crawl back down their burrows and may wait up to several months for their eggs to mature. The female eventually lays 40 to 50 eggs in a spiral pattern at the end of the burrow as much as 3 m (10 ft) below the surface. The eggs hatch in about two months.”

You can also find more information on these fascinating insects on Wikipedia, BugGuide.net, Washington State University, and YouTube, including: 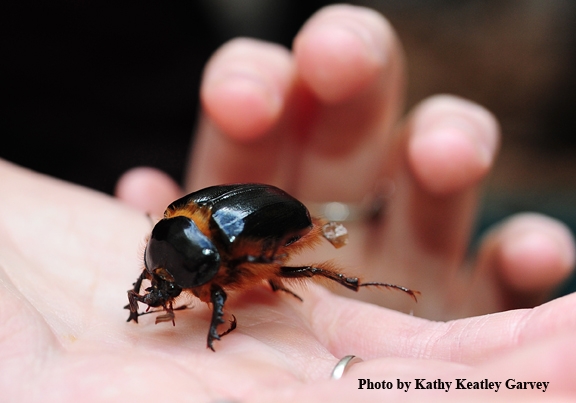 This rain beetle, thought to be Pleocoma fimbriata, was collected in Plymouth, Amador County. (Photo by Kathy Keatley Garvey) 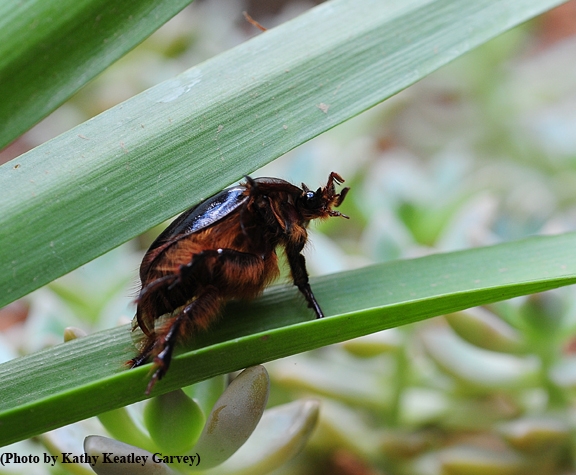 A beetle, thought to be Pleocoma fimbriata,walks on a leaf. (Photo by Kathy Keatley Garvey) 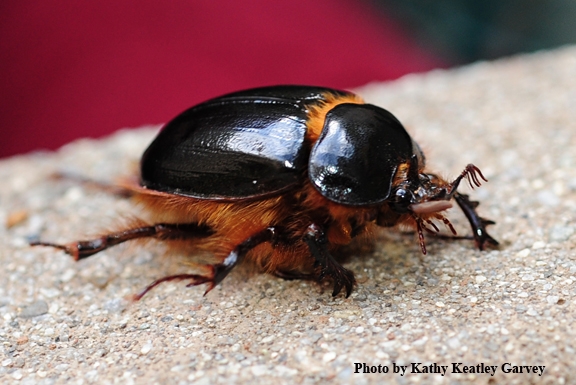 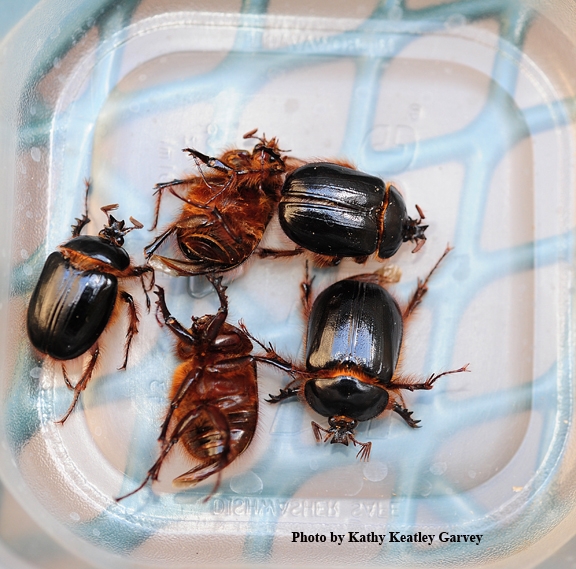