Blacklighting at the Bohart. (Photo by Kathy Keatley Garvey)
Oh, what a (Moth) Night!

It was a family night in more ways than one.

Families who attended the Bohart Museum of Entomology's annual Moth Night last Saturday, Aug. 3, not only saw  specimens from scores of insect families inside the UC Davis insect museum, but outside as well.

Moths that visited the blacklighting display from around 9:15 to 11 p.m. included: "Moth Man" John De Benedictis (Photo by Kathy Keatley Garvey)
In comparison, De Benedictis found 14 species in his backyard the following night, while Karofelas found nine in his yard. Both live in Davis.

Since 1998, he has recorded more than 350 species at night from his yard (including an occasional butterfly or skipper), "but there are at least 25 more that I have not identified, so I estimate I've collected 400 plus species in my yard in 21 years when diurnal (day-flying) species are included in the count."

If you attended Moth Night and you cultivate citrus, strawberries, pomegranates or cucumbers, you may have recognized some of the moths on the blacklighting display or seen the larval pests. For example, the omnivorous leafroller is a pest of citrus. The filbertworm is a pest of pomegranate. The Opogona crown borer is commonly found in bird of paradise plants, but also attacks strawberries, according to the UC Statewide Integrated Pest Management Program (UC IPM). The Spodoptera exigua (beet armyworm) and Spodoptera praefica (western yellow-striped armyworm) are pests of cucurbits (cucumber family). A cocoon necklace. (Photo by Kathy Keatley Garvey)
Entomologist Jeff Smith, who curates the Lepidoptera (moths and butterflies) collection at the Bohart, spent the evening, 8 to 11, describing moths, showing specimens, and answering questions. "Moths can be distinguished from butterflies by their antennae, which always taper out to a fine point at the end, while butterflies' antennae end with an enlarged club," he said. "Very few butterflies can be labeled as pests, while a great many species of moths are pests, often extremely damaging kinds such as the gypsy moth, corn earworm, tent caterpillars, and California oak moth."

In size, visitors saw the biggest (Atlas) to the smallest moth.  "Our smallest moth is one from Africa that was overlooked in the alcohol in which it was captured because of its tiny size," Smith pointed out. "Finally, a student separating the insects in the alcohol found it, and it is nearly microscopic."  Visitors also marveled at the hummingbird moth which has a proboscis (tongue) that 12 inches long.

Bohart associate Emma Cluff curated the silkworm moths and silks display. She gathered silkworm moths from the Bohart Museum collection, and textiles from a donation by Richard Peigler, a moth expert and biology professor at the University of the Incarnate Word, San Antonio, Texas.

The family craft activity involved coloring and stringing white cocoons (donated by Peigler) to make necklaces or bracelets. Cluff and fellow entomologist enthusiast Keely Davies created a huge luna moth in the hallway. Some 200 visitors participated in the free and family friendly event.

The moth exhibit is currently on display at the Bohart Museum.

Founded in 1946 by Richard M. Bohart (1913-2007), and directed by Lynn Kimsey, UC Davis professor of entomology, the Bohart Museum houses a global collection of nearly eight million insect speicments. It is s also the home of the seventh largest insect collection in North America; the California Insect Survey, a storehouse of the insect biodiversity; a live "petting zoo" and a gift shop.

The Bohart Museum's regular hours have changed for the summer season. As of July 3, the insect museum is hosting 30-minute tours starting at 2:30 and 3:30 pm. No reservations are required and all ages are welcome. Admission is free, but donations are always welcomed. The Bohart is open to walk-in visitors Monday through Thursday from 1 to 5 p.m. It is closed from 9 a.m. to noon to walk-in visits (the insect museum conducts many tours and outreach programs during those times). More information on the Bohart Museum is available on the website or by contacting (530) 752-0493 or email bmuseum@ucdavis.edu. 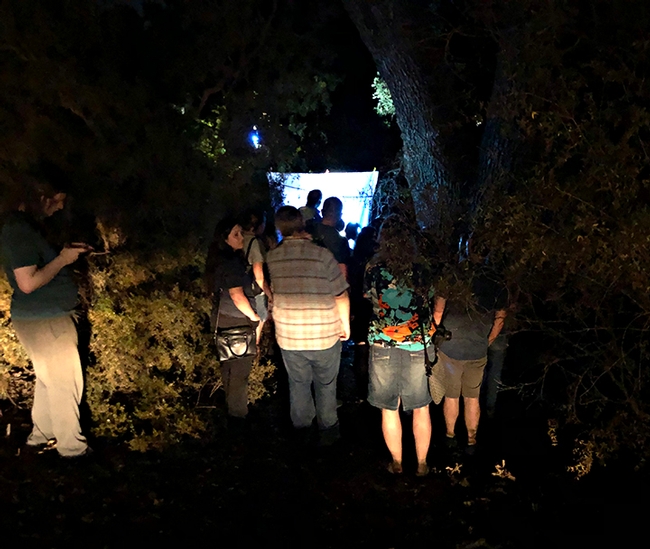 Visitors gather at the blacklighting display just outside the Bohart Museum of Entomology. (Photo by Kathy Keatley Garvey) 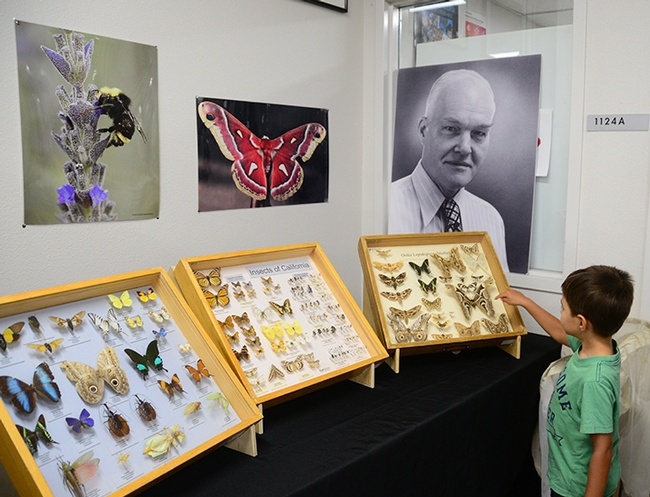 A photograph of entomologist Richard Bohart, for whom the Bohart Museum of Entomology is named, anchors this display. (Photo by Kathy Keatley Garvey) 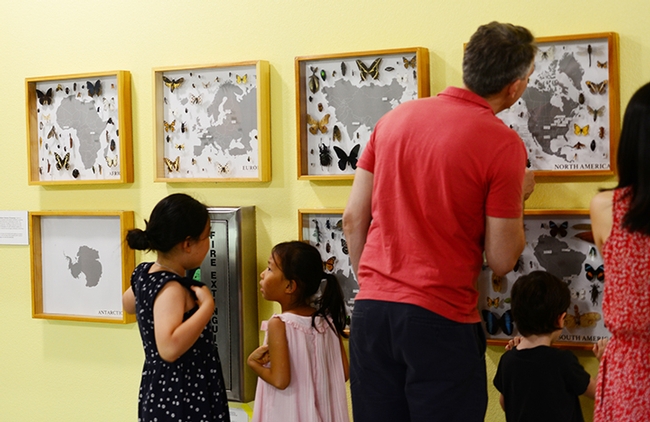 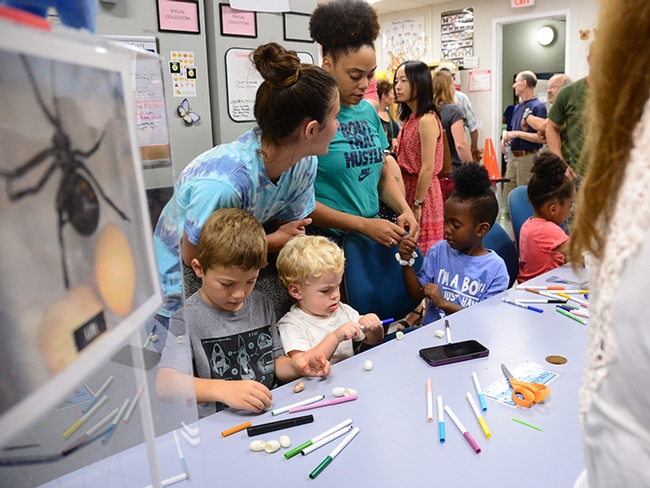 The youngsters work at coloring and stringing together cocoons for bracelets and necklaces. (Photo by Kathy Keatley Garvey) 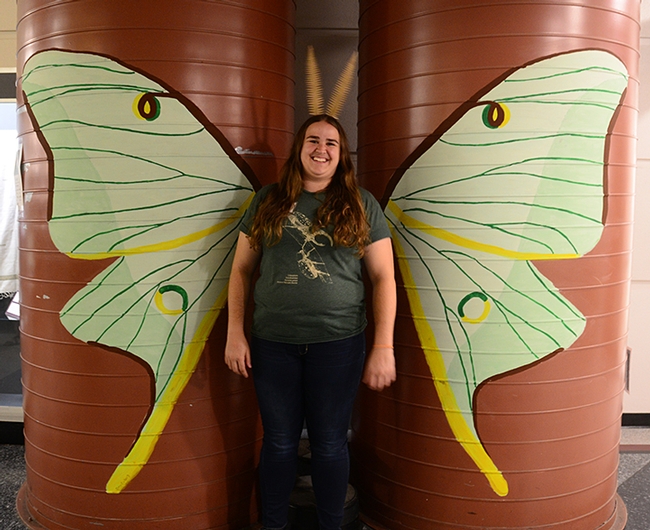 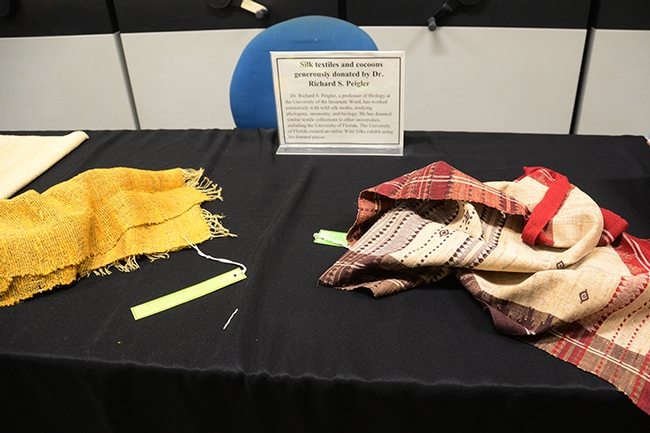 Richard Peigler, a biology professor at the University of the Incarnate Word, San Antonio, Texas, donated the textiles to the Bohart Museum. It is part of its permanent collection. (Photo by Kathy Keatley Garvey) 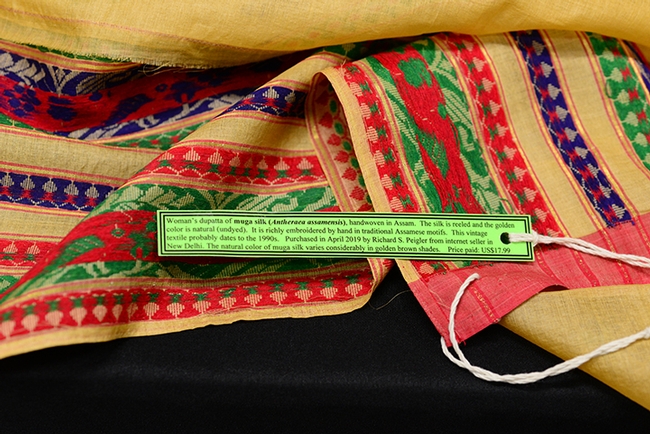 This is a woman's dupatta (shawl) of muga silk handwoven in Assam. It is richly embroidered by hand in traditional Assamese motifs. Moth expert Richard Peigler of San Antonio, Texas, donated this piece and many others to the Bohart Museum. (Photo by Kathy Keatley Garvey) 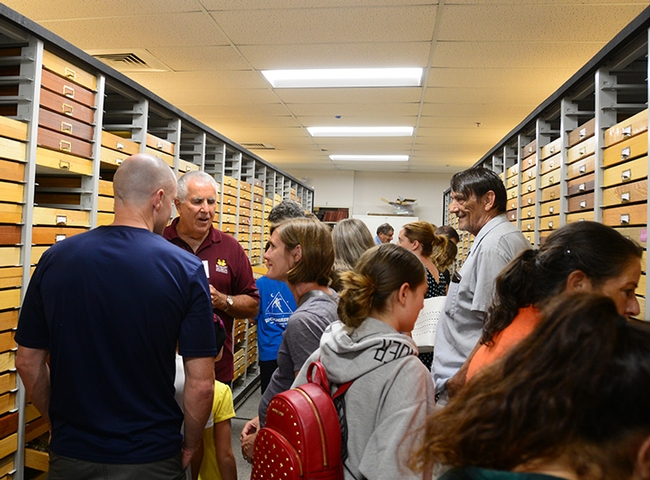 Bohart Museum associate Emma Cluff, shown here with residents of the insect museum's petting zoo, curated the silkworm and silk display. (Photo by Kathy Keatley Garvey)
If you own a silk shirt or blouse, a silk tablecloth, or a silk handkerchief, you may not have thought much about its insect origin.

You will if you attend the Bohart Museum of Entomology Moth Night on Saturday, Aug. 3 at the University of California, Davis. The event, free and family friendly, is scheduled both inside the museum (Room 1124 of the Academic Surge Building, 455 Crocker Lane, UC Davis campus) and outside the facility.

Starting at 8 p.m., visitors will gather inside the museum to see the displays, talk to the scientists, and engage in a family craft activity (creating silk moth cocoon necklaces). Then as darkness falls, around 9 or 9:30, blacklighting will take place just outside the museum. Visitors will see a variety of insects on a hanging white sheet that's illuminated by a generator-powered ultraviolet (UV) light.

"He sent us a collection of more than 10 pieces of cloth and several pieces of jewelry that utilize cocoons," Cluff said. "He has sent similar collections of cloth to other research institutions."

"These textiles represent work that has been done for centuries, and in some cases millennia, throughout Asia," Cluff said. "The relationship between these artists and the insects that provide their materials is beautiful and elaborate and we wanted to bring it to light." The hallway display of silkworm moths showcases tasar, tussah, eri and mulberry silk.

Peigler focuses his research primarily on the taxonomy, phylogeny and biology of wild silkmoths (Family Saturniidae) of the world, particularly ones from eastern Asia. His studies encompass ecology, parasitoids, and host plants of wild silkmoths.  Silk was first developed in ancient China. "The earliest example of silk has been found in tombs at the neolithic site Jiahu in Henan, and dates back 8,500 years," according to Wikipedia.

What's the craft activity at the Bohart about? "Kids will be able to color and string white cocoons and make necklaces or bracelets with them,"  Cluff said.

Several scientists will be on hand to discuss moths and answer questions. They include senior museum scientist Steve Heydon of the Bohart Museum; Jeff Smith, curator of the the moth and butterfly specimens; and Bohart associates "Moth Man" John DeBenedictis and Greg Kareofelas.

The Bohart hosts the annual Moth Night in connection with National Moth Week, July 20-28.  Scientists estimate there are 150,000 to more than 500,000 moth species. Some are pinhead-size.  The largest ones are the Atlas moths, which have  a wingspan of 10 to 12 inches.

The Bohart Museum's regular hours have changed for the summer season. As of July 3, the insect museum is hosting 30-minute tours starting at 2:30 and 3:30 pm. No reservations are required and all ages are welcome. Admission is free, but donations are always welcomed. The Bohart is open to walk-in visitors Monday through Thursday from 1 to 5 p.m. It is closed from 9 a.m. to noon to walk-in visits (the insect museum conducts many tours and outreach programs during those times). 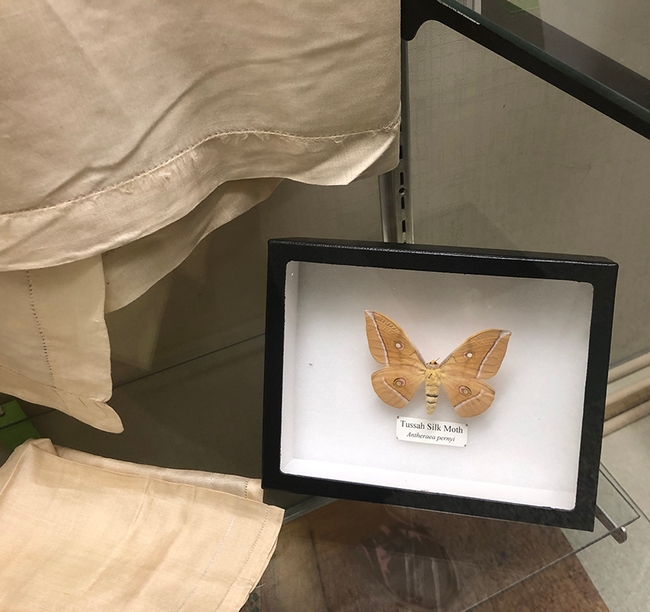 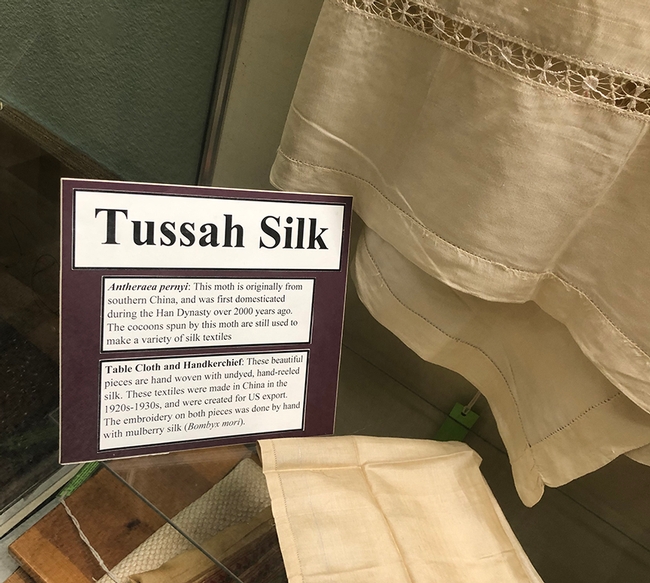 Tussah silk is displayed at the Bohart Museum of Entomology. The exhibit features a hand-woven tablecloth and a handkerchief. (Photo by Kathy Keatley Garvey) 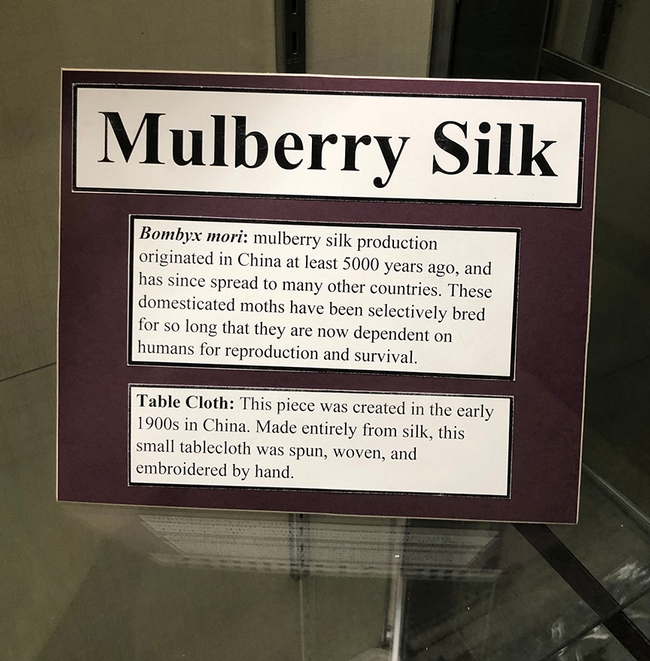