Butterfly expert Art Shapiro, distinguished professor of evolution and ecology at UC Davis, holds the 2012 winner. (Photo by Kathy Keatley Garvey)
It's almost that time again—time for the annual “Beer for a Butterfly” contest or “Suds for a Bug.”

If you're out and about on Jan. 1, start looking for that cabbage white butterfly. But you're going to have to beat the sponsor, noted butterfly expert Art Shapiro, UC Davis distinguished professor of evolution and ecology.

Shapiro is offering a pitcher of beer (or its equivalent) for the first cabbage white butterfly (Pieris rapae) collected in 2017 in the three-county area of Sacramento, Yolo and Solano.

The 2016 winner was UC Davis ecology graduate student Jacob Montgomery who caught a female cabbage white butterfly on Jan. 16 on his lavender plant just outside his front door in west Davis, Yolo County.

“It was cold and rainy and the butterfly's wings looked bent like it had just hatched,” recalled Montgomery, whose grad student studies involve phytoplankton and zooplankton dynamics in the Delta. “It was not difficult to catch. I picked it up by hand…I had been aware of the contest but not actively searching for the butterflies. It was completely opportunistic.”

The 2016 prize winner probably eclosed or hatched around 7:30 that morning, said Shapiro, who has earlier predicted that the first butterfly of 2016 would be collected in mid-January. UC Davis graduate student Jacob Montgomery with his 2016 prize winner. (Photo by Kathy Keatley Garvey)
Shapiro launched the contest in 1972 to draw attention to Pieris rapae and its first flight.  “It is typically one of the first butterflies to emerge in late winter,” he said. “Since 1972, the first flight has varied from Jan. 1 to Feb. 22, averaging about Jan. 20.”

The butterfly is emerging earlier and earlier as the regional climate has warmed, said Shapiro, who does long-term studies of butterfly life cycles and climate. "Such studies are especially important to help us understand biological responses to climate change. The cabbage white is now emerging a week or so earlier on average than it did 30 years ago here."

What does it look like? It's a white butterfly with black dots on the upperside (which may be faint or not visible in the early season). It inhabits vacant lots, fields and gardens where its host plants, weedy mustards, grow.

The male is white. The female is often slightly buffy;  the "underside of the hindwing and apex of the forewing may be distinctly yellow and normally have a gray cast,” Shapiro said. “The black dots and apical spot on the upperside tend to be faint or even to disappear really early in the season.” Shapiro, who is in the field more than 200 days of the year, monitoring butterflies of central California, knows where to find the cabbage whites and usually returns to his office with the first cabbage white of the year. He has been defeated only four times since 1972. Three winners were his own graduate students: Adam Porter defeated him in 1983; and Sherri Graves and Rick VanBuskirk each won in the late 1990s.

Shapiro has collected many of his winners in mustard patches near railroad tracks in West Sacramento, Yolo County.  Over the last seven years, five of the winners came from West Sacramento; one in Davis, Yolo County; and one in Suisun, Solano County.

Coincidentally, Shapiro caught the 2013 and 2009 winners on President Obama's Inauguration Day. After catching the 2013 winner, he quipped: "The constitution mandates the swearing-in for Jan. 20, though it does not require Pieris rapae to emerge on that date! Thank you, Mr. President.” 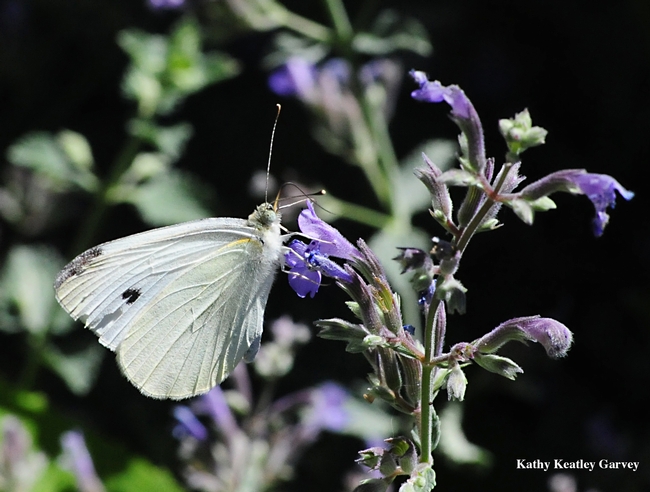