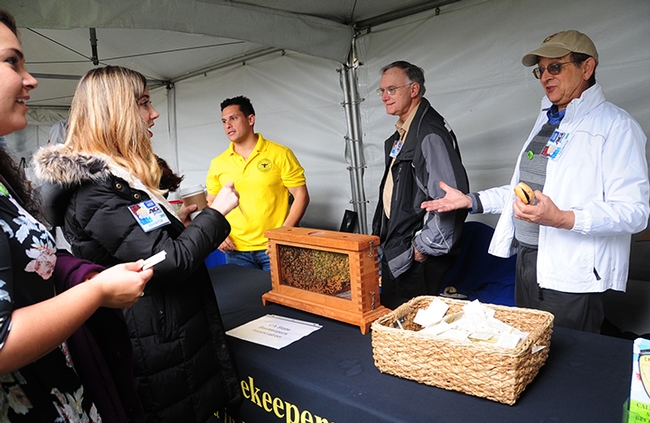 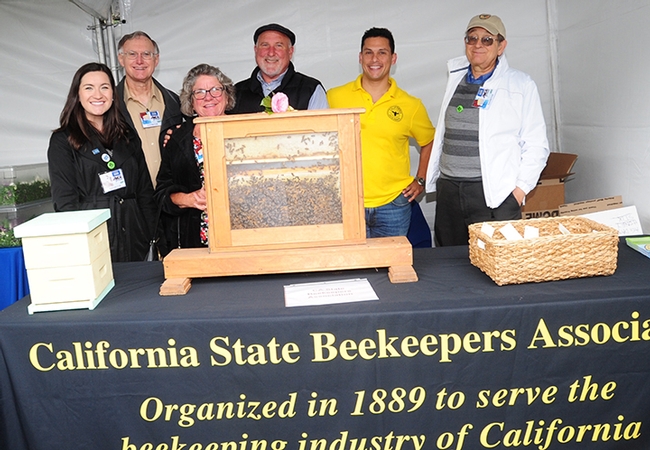 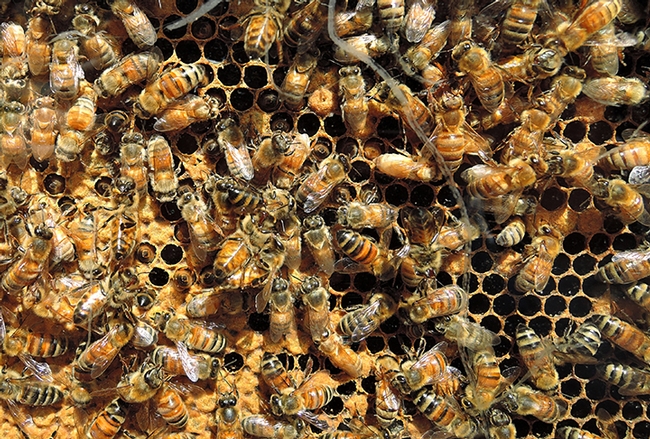 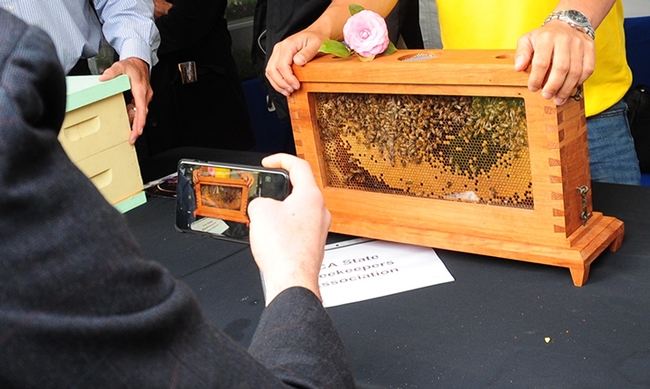 UC Davis bee breeder-geneticist Susan Cobey, manager of the Harry H. Laidlaw Jr., Honey Bee Research Facility, is the kind of person who would give you the shirt off her back.

And that's exactly what she did when several visitors recently toured  the Laidlaw facility.

Cobey let one visitor borrow her long-sleeved denim shirt. Then, bare-armed, Cobey opened a hive to display the colony.  That says two things: her generosity and the temperament of her bees: gentle.

"Sue's bees are polite," observed beekeeper Steve Godlin of Visalia, vice chair of the California State Apiary board member, duirng an apiar board meeting Oct. 3, 2008 at the Laidlaw facility.

Apiary visitors are customarily issued a bee veil, and, depending on the activity taking place and the time of year, may also be provided a full protective suit.

Or a long-sleeved shirt from Cobey.

That's just one of the things that Cobey does behind the scenes.

Update: For her contributions to the Laidlaw facility, the university and the bee industry, she recently received a citation for excellence from the UC Davis Staff Assembly. She was one of 21 individuals, plus 13 teams, receiving the award at a ceremony in the courtyard of Chancellor Larry Vanderhoef's home.

Some 6000 staff employees were eligible for the award sform a total pool of 12,000 UC Davis staff, according to Staff Assembly coordinator Tiva Lasier.

“ agriculture depends upon a healthy and viable beekeeping industry, and at the Harry H. Laidlaw Jr. Honey Bee Research Facility, the university depends on our nominee to improve honey bee stock,” the nomination letter from the UC Davis Department of Entomology read. “She is genetically improving honey bee stock and has developed her own line of the internationally known New World Carniolians. In lay language, she’s building a better bee that will resist pest pathogens and parasites, considered key factors in colony collapse disorder (CCD).”

Cobey was praised for raising awareness for the plight of honey bees at local, state, national and global levels. She maintains a close relationship with the beekeeping industry at all levels, especially the California Bee Breeders, who produce half the nation’s supply of mated queen honey bees. “If an individual beekeeper is having trouble, she takes a personal interest in solving the problem as if the bees were hers,” the nomination letter read.

Cobey maintains collaborative research projects with many honey bee researchers in the and abroad. This year she helped develop the protocol for the international importation of honey bee germ plasm. She imports bee semen from various countries to build a better bee. She conducts three different popular workshops on queen rearing and on instrumental insemination at the Laidlaw facility; is often invited to conduct workshops overseas; and has produced a video on the topic.

Cobey, who joined the UC Davis Department of Entomology in May 2007 from ,  received her bachelor’s degree in entomology from the of , .  She worked in bee biology at UC Davis from 1978 to 1980, influenced by Harry Laidlaw (1907-2003), considered the father of bee genetics..

“Our nominee treats bees as she does people: both politely and respectively,” said UC Cooperative Extension Apiculturist Eric Mussen, a member of the UC Davis Department of Entomology faculty since 1976. 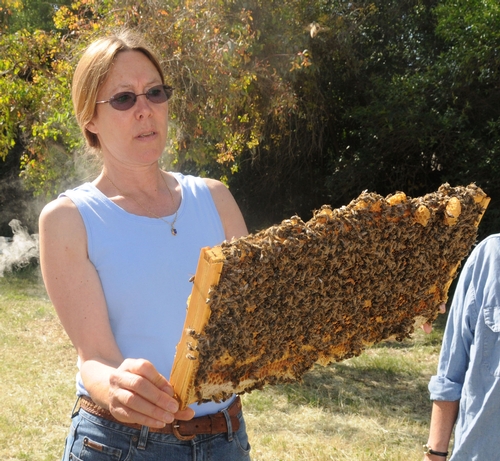