If you like your insects long, slender and delicate, and resembling a flying neon needle, the damselfly is for you.

Who can resist watching them and photographing them?

The common blue damselfly or Northern Bluet (Enallagma cyathigerum) is as thin as a needle, a jeweled blue needle.

We've seen them hover in our yard,  like mini-helicopters--oops, make that "skinny mini" helicopters--and then touch down on a leaf to feast on small insects.

Damselflies share the same order, Odonata, as their larger cousins, the dragonflies. As any entomologist will tell you, damselflies belong to the suborder Zygoptera, and dragonflies, Anisoptera. They are an ancient group, with fossil records showing they existed at least 250 million years ago.

Damselflies are no "damsels in distress." They're daytime hunters that "consume large quantities of other insects such as flies, mosquitoes and moths and some eat beetles and caterpillars," according to a Texas A&M University (TAMU) website.

Some other facts on the TAMU site:

The UC Statewide Integrated Pest Management (UC IPM) describes damselflies this way: "The head is narrow with bulging eyes, long antennae, and tubular-sucking mouthparts. The legs are long and the front pair are slightly swollen with inconspicuous spines. Adults and nymphs can move rapidly when disturbed or stalking prey."

A photography tip: if you spot a damselfly, approach it with your camera already raised. A sudden movement may spook them. 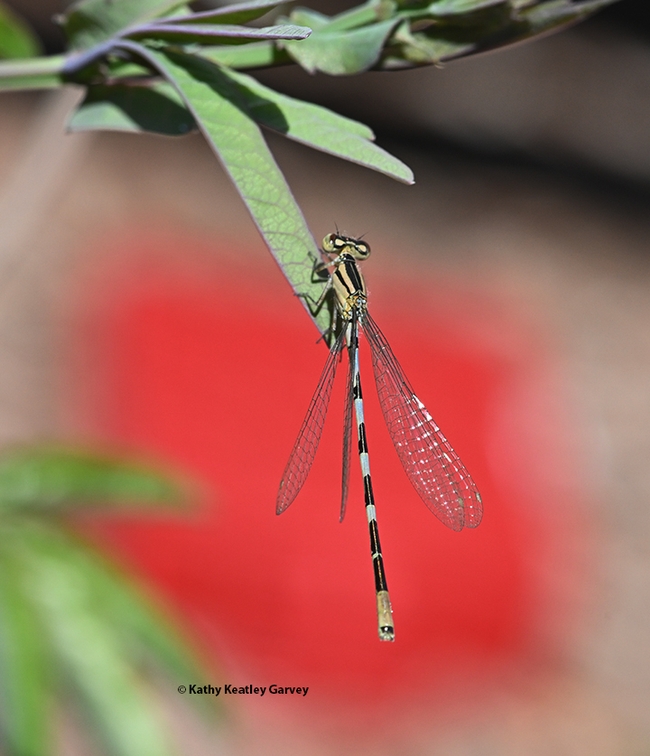 This damselfly appears framed "in the red" (a red vehicle light). (Photo by Kathy Keatley Garvey)

The damselfly is long and slender and is sometimes called "the devil's darning needle." (Photo by Kathy Keatley Garvey) 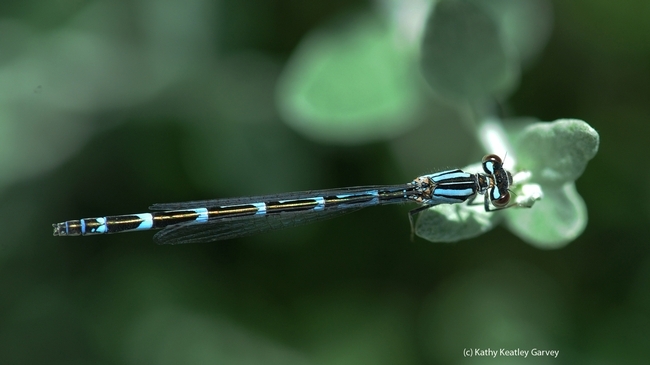 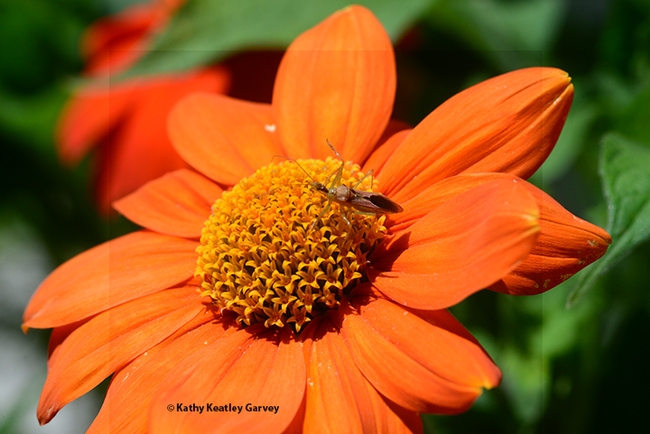 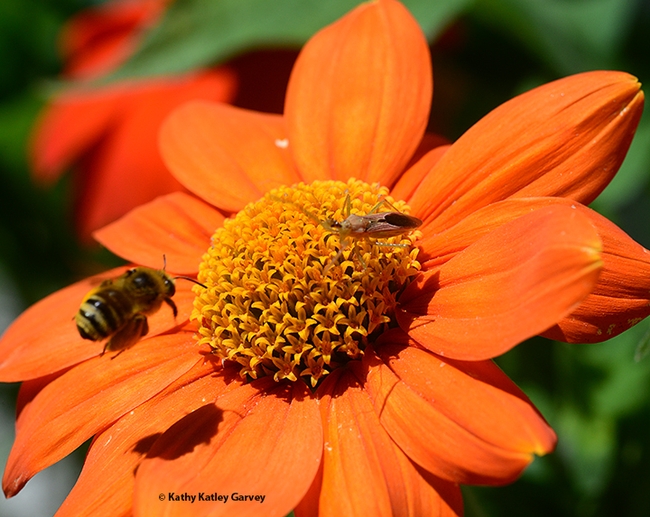 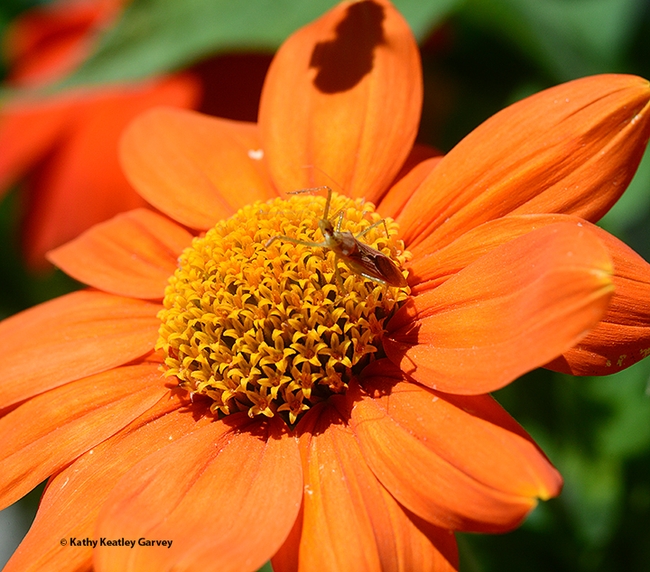 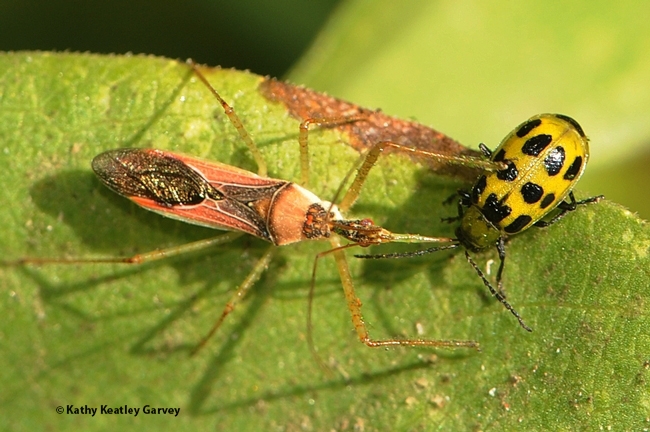 When solider beetles (family Cantharidae) go on patrol in your garden, don't kill them. They're not being deployed to harm you.

They're the good guys. They eat aphids and other soft-bodied insects.

Sometimes called "leatherwings"--they look like the insect equivalent to the British soldiers in the American Revolution soldiers--soldier beetles compete with lady beetles (aka ladybugs), lacewings, damsel bugs, long-legged flies and other insects for aphids. Larvae of lady beetles and syrphid flies (aka flower flies and hover flies) also feast on aphids.

"Adult soldier beetles are elongate and usually dark brown to black with orange, red, or yellow. The head is commonly bent downward. The antennae are 11-segmented, threadlike, and commonly held forward of the body. The pronotum is usually wider than the head and wider than long. The wing covers are smooth to velvety appearing and soft and flexible, giving rise to the common name leatherwings. Adults range from 1/16 to 1-1/8 inches (1.5 to 28 mm) long, varying by species....About 160 species of soldier beetles in 11 genera occur in California. Common genera include Cantharis, Chauliognathus, and Podabrus."

Adults are active during the day and usually observed on flowers or leaves infested with aphids or other honeydew-excreting insects," UC IPM says. "When disturbed, adults may withdraw their legs and drop to the ground as if dead. Adults' blackish and red coloration alerts vertebrate predators that cantharid beetles are distasteful; adults, larvae, and pupae can excrete noxious, defensive chemicals from specialized abdominal glands."

None that visited our garden last weekend dropped to the ground. We didn't disturb them, either (we were using a 200mm macro lens). 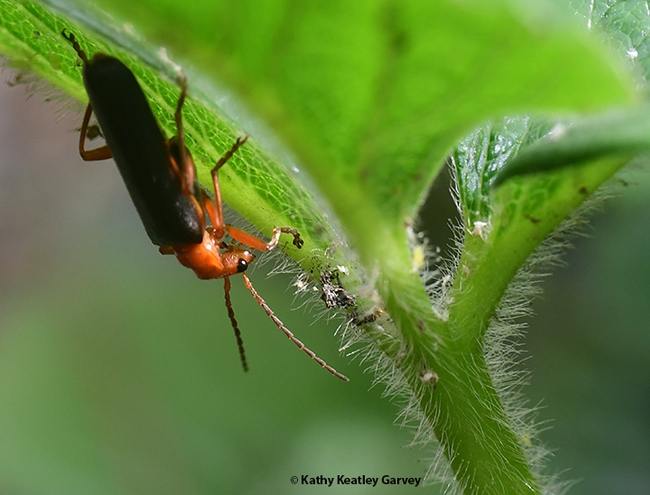 A soldier beetle seeking aphids and other soft-bodied insects on a strawberry plant. (Photo by Kathy Keatley Garvey) 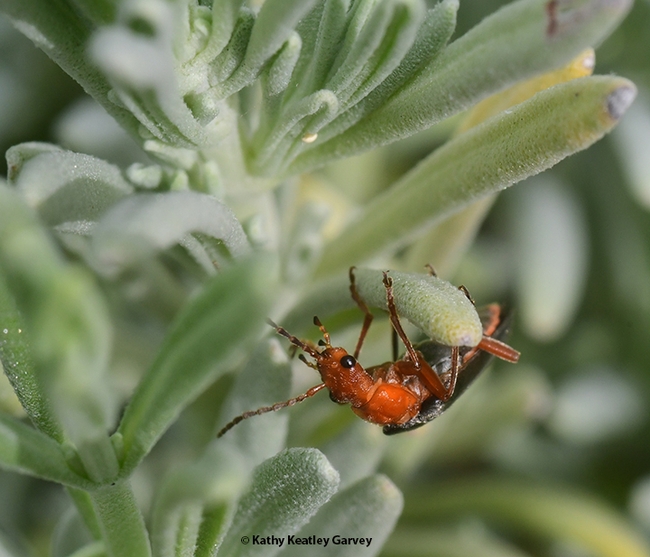 Here an aphid, there an aphid...A soldier beetle on patrol. (Photo by Kathy Keatley Garvey) 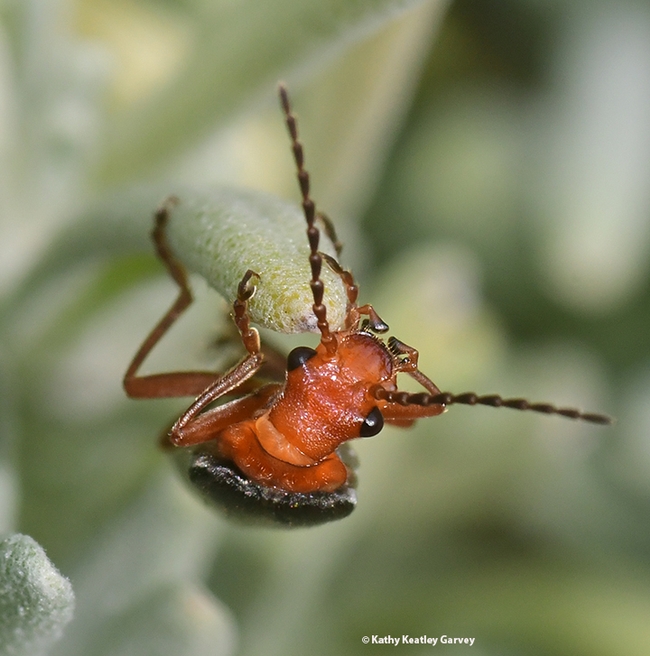 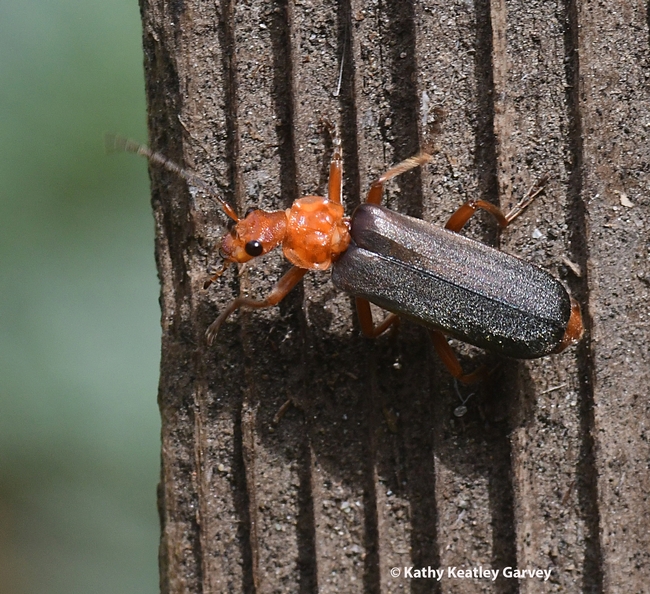 Last weekend we spotted cottony cushion scale, Icerya purchasi, infesting the twigs and branches of our Nandina (Nandina domestica), planted 22 years ago. This scale insect is more commonly found on citrus crops and Pittosporum, but there it was.

It's a native of Australia and apparently made its way to California on acacia plants around 1868 or 1869, and began infesting citrus groves in southern California. It's now found throughout the world, wherever citrus is grown. Pick it up and it's as light as a feather and soft as cotton.

If you look closely at a mature cottony cushion scale (hermaphrodite), you can see that it's reddish brown with black hairs. It produces a ridged white egg sac encasing hundreds of brilliant red eggs--the color of pomegranate kernels. A vedalia beetle, distinguished by its darker red dome and splotchy black markings. (Photo by Kathy Keatley Garvey)
The UC Statewide Integrated Pest Management Program (UC IPM) says it's easy to spot. Yes, it is, especially when it's looks like drops of snow on cherry-red Nandina berries.

"Like other scales, cottony cushion scale decreases the vitality of its host by sucking phloem sap from the leaves, twigs, branches, and trunk," according to UC IPM. "Feeding can result in defoliation and dieback of twigs and small branches when infestations are extremely heavy. Heavy populations can severely reduce the yield of citrus trees. Like soft scales, cottony cushion scale excretes honeydew, which is usually accompanied by blackish sooty mold growth and ants."

Its most famous natural enemy is the vedalia beetle, Rodolia cardinalis, introduced from Australia in the 1890s to save California's citrus crops. Vedalia beetle vs. cottony cushion scale--this is a clear-cut case of successful biological control. Vedalia beetles are distinguished by their darker red domes with splotchy black markings.

Another natural enemy is the parasitic fly Cryptochaetum iceryae, which lays its eggs inside the cottony cushion scale. "It deposits one to four eggs inside each second-instar, third-instar, or adult female scale body," UC IPM points out. "The eggs hatch into larvae that feed within the scale." (See more information on the UC IPM website)

Interesting that we've never found the cottony cushion scale on our nearby tangerine and lemon trees. "Marked Safe from Cottony Cushion Scale." 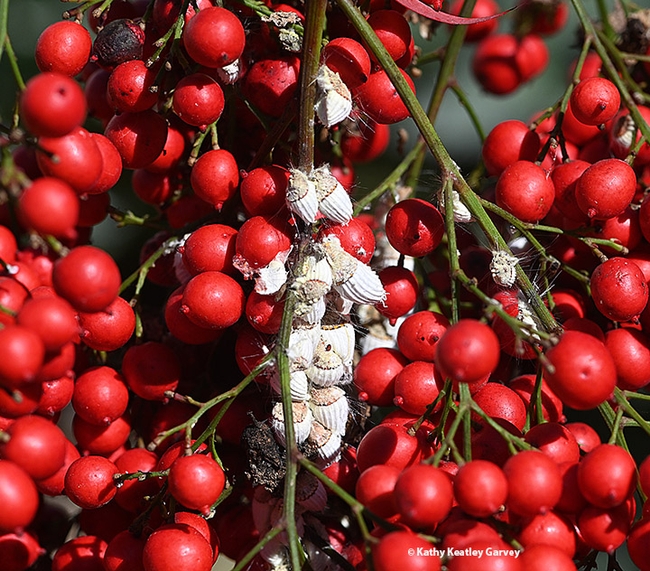 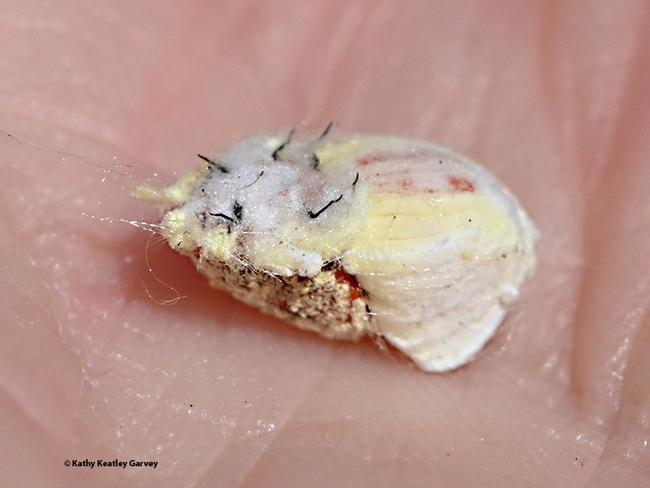 ACP they call it. A native of southern Asia, it was first detected it in the United States (Florida) in 1998.

ACP serves as a vector or carrier for the deadly citrus greening disease or Huanglongbing (HLB), a bacterial disease that infects and kills citrus trees.

"ACP arrived in Southern California in 2008 and has fully infested that region," according to the UC Statewide Integrated Pest Management Program. "HLB disease was first detected in Los Angeles in 2012."

You may remember when the equivalent of a five-alarm fire went off when the citrus greening disease was found in California.  The California Department of Food and Agriculture (CDFA) sounded the alarm.

What's new in the research?

Heck, who focuses her USDA-ARS research on the discovery and characterization of insect vector-plant-pathogen interactions, serves as a lead scientist and research molecular biologist with the Emerging Pests and Pathogens Research Unit, located in the Robert W. Holley Center for Agriculture and Health, Ithaca.

The Asian citrus psyllid is a threat to America's citrus industry, according to a USDA Fact Sheet. "Burned tips and twisted leaves result from an infestation on new growth. Psyllids are also carriers of the bacterium that causes Huanglongbing (HLB) disease, also known as citrus greening disease, spreading the disease to healthy citrus plants. Citrus greening is one of the most serious citrus plant diseases in the world. Once a tree is infected, there is no cure." An adult Asian ctrus psyllid, about 2 to 3 millimeters long, on a young citrus leaf. (Photo by David Hall of USDA-ARS)
"Vector-borne diseases are among the most challenging problems in agriculture," says Heck, who plans and conducts sophisticated experiments using a variety of molecular, genetic and functional genomics methods to gain a deeper understanding of vector-borne plant pathogens.

Heck, who holds a bachelor's degree in biology from Boston University,  received her doctorate from.Cold Spring Harbor Laboratory, Cold Spring, N.Y. She completed her postdoctoral training in vector biology and mass spectrometry-based proteomics. Her research on protein interactions and protein transport in plants and insects spans more than 20 years, resulting in an international reputation as a vector biology authority skilled in the management of vector-borne plant diseases.  Heck is a lead in the USDA-ARS Citrus Greening Grand Challenge,  the agency's coordinated national response to combat citrus greening disease and the agency's scientific representative on the National Cotton Council's Cotton Leafroll Dwarf Virus Task Force.

Heck has published more than 50 peer-reviewed journal articles, book chapters, and several patents. Her peers have recognized her scientific excellence with a number of awards, including a 2017 Presidential Early Career Award for Scientists and Engineers from the Obama White House Office of Science and Technology Policy.

For technical issues involving the seminar, contact Siddique at siddique@ucdavis.edu. 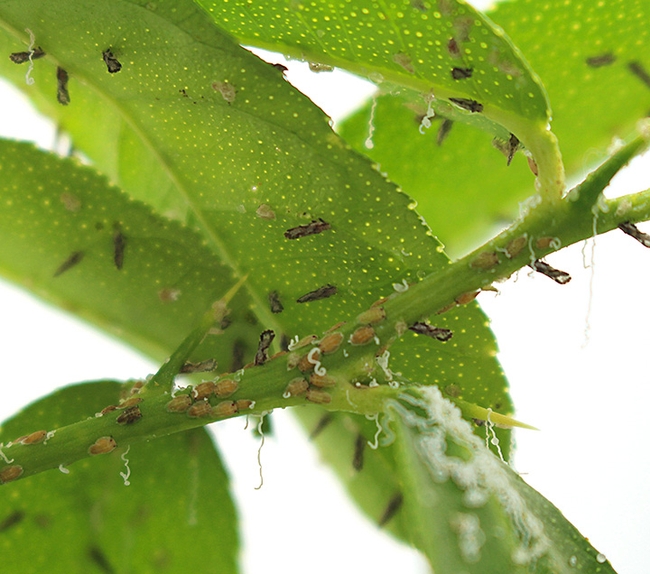