And what better day than a Friday to post an image of a syrphid fly nectaring on a tower of jewels, Echium wildpretii? We all need "pretty" in our lives.

Syrphid flies, also known as "flower flies" and "hover flies," are pollinators that hover over a blossom before touching down.

"Most species are predaceous, most commonly on aphids or mealybugs," according to the UC Statewide Integrated Pest Management Program. "Some syrphids prey on ants, caterpillars, froghoppers, psyllids, scales, other insects, or mites. About 100 to 400 aphids can be fed upon by each aphid-feeding larva before it pupates, but this varies by the mature size of the syrphid relative to the aphids' size."

Folks who assume that every critter they see in, on, or around a flower is a honey bee should know a couple of distinguishing features: bees don't hover, and syrphids have only one pair of wings, while bees have two. "Their large eyes and short antenna also give them away," notes Kelly Rourke in her U.S. Forest Service article on "Syrphid Fly (Sphaerophoria philanthus). "The absence of pollinium, or pollen sacs, is more difficult to see, but is another difference from a bee. Of the nearly 900 species of flower flies (family Syrphidae) in North America, most have yellow and black stripes." He was just notified that he's a recipient of the UC Davis Academic Senate's 2017 Distinguished Scholarly Public Service.

"Professor Zalom is deserving of the Distinguished Scholarly Public Service Award for his outstanding leadership in state, national and international organizations focused on integrated pest management," the Academic Senate awards committee wrote. "While serving as the president of the 7000-member Entomological Society of America, Professor Zalom pioneered initiatives aimed at identifying sustainable solutions for some of the world's important insect-based problems. For example, he organized and co-chaired the 'Summit on the Aedes aegypti Crisis in the Americas' that brought together more than 70 researchers, public health officials, entomologists, and government agencies throughout the hemisphere to identify immediate steps to sustainable solutions to control the yellow mosquito that can carry dengue fever and Zika fever viruses."

And IPM? The Academic Senate pointed out:

"Professor Zalom is known globally for his leadership in the Association of Public and Land Grant Universities IPM Committee from 1999-2015, for being a founding member of the IPM Voice, which is a non-profit organization that advocates for progressive IPM that provides environmental, social and economic benefits, and for serving on the Board of Counselors of the Entomological Foundation that promotes educational programs for grades K-12. Professor Zalom's efforts in public service have contributed to the betterment of California and the U.S." Frank Zalom is also known for his research on strawberries and working with the growers.
An awards reception will be scheduled in the spring quarter for Zalom and two other recipients of this award: Nolan Zane, professor of Asian-American Studies; and Christine Kreuder Johnson, professor, Medicine and Epidemiology, School of Veterinary Medicine.

For his work in IPM, he is also the recipient of the 2017 Perry Adkisson Distinguished Speaker Award from Texas A&M. He will deliver an invited presentation, “Invasive Species, Integrated Pest Management, and One Perspective from the West Coast"  on Thursday, March 30 in College Station, Texas. The annual lecture honors Perry Lee Adkisson, chancellor emeritus and distinguished professor emeritus of the Texas A&M University System. His research accomplishments are internationally known in the areas of sustainable insect control and crop protection.

“Perry Lee Adkisson is among the icons of integrated pest management, and one of the people that I have most looked up to since starting my career in entomology," Zalom said last week. "I can't adequately express how honored I am to receive this award, and have an opportunity to visit with him once again in College Station.”

Zalom, too, is an IPM icon. (See more on Zalom's work on the UC Davis Department of Entomology and Nematology website.)

An icon, for sure. 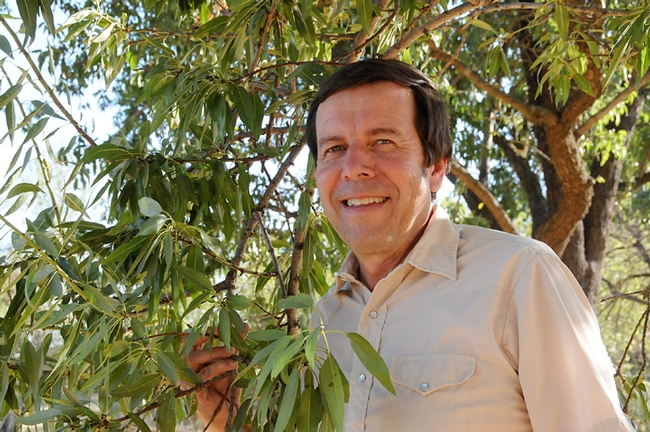 Have you checked your rose bushes lately? Along with the lush new growth, you'll probably notice a new crop of aphids. And if you look closely, probably lady beetles (aka ladybugs).

The UC Integrated Pest Management Program (UC IPM) defines aphids as "small, soft-bodied insects with long slender mouthparts that they use to pierce stems, leaves, and other tender plant parts and suck out fluids." Basically, they're pear-shaped insects with long legs and long antennae and may be green, yellow, brown, red or black "depending on the species and the plants they feed on," according to UC IPM. "Almost every plant has one or more aphid species that occasionally feed on it. Many aphid species are difficult to distinguish from one another; however, management of most aphid species is similar."

"A few species appear waxy or woolly due to the secretion of a waxy white or gray substance over their body surface. Most species have a pair of tubelike structures called cornicles projecting backward out of the hind end of their body. The presence of cornicles distinguishes aphids from all other insects."

UC IPM also says that most aphids don't move rapidly when disturbed. That's the truth! Sometimes they're just a 16th of an inch away from a lady beetle that's gobbling up their siblings.

The lady beetles in our garden today were primarily the multicolored Asian lady beetles (Harmonia axyridis), also known as Harlequin lady beetles. They're native to China, Russia, Korea and Japan. In colder parts of the world, they're considered a nuisance when they overwinter in large congregations in walls, windows or attic. They leave unpleasant odors and stains.

Friend or foe? They're more of a friend, at least here in sunny California. 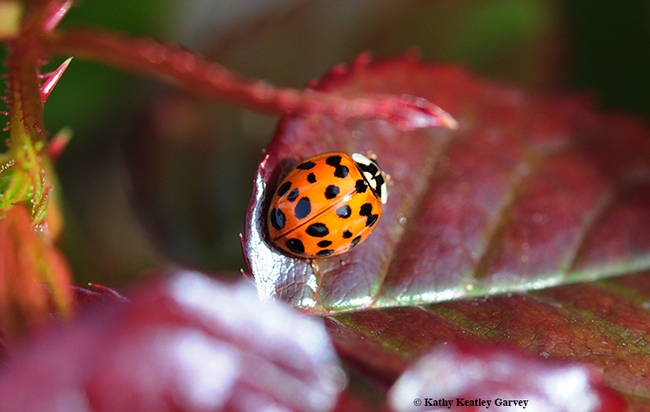 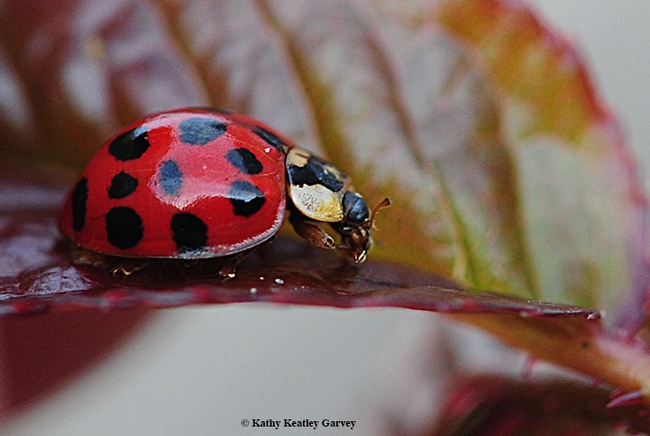 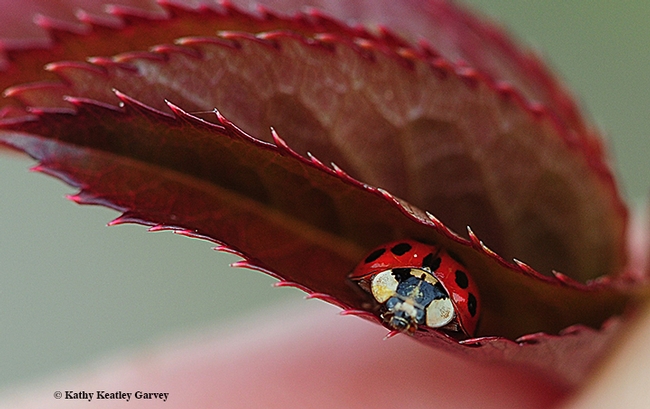 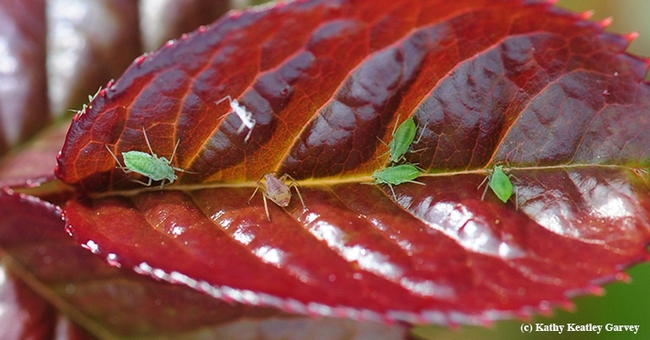