Well, maybe not mid-life, but definitely out of season.

A female monarch butterfly eclosed today in our little indoor butterfly habitat. Two weeks ago, we “rescued” the caterpillar from a narrow-leafed milkweed plant in our Vacaville pollinator garden and brought it inside.  Our goal: conservation. We sought to protect it from prey, including the resident scrub jays.

So, this morning, we lost a chrysalis and gained a butterfly. She was right on schedule: Eclosure after 10 days as a chrysalis.

When the temperature hit 61 degrees at around 1 p.m., we released her. She fluttered a bit, and then soared straight up, a good 80 feet high. Usually when we release the monarchs, they flutter around, sometimes touching down on a bush and sometimes soaring over it. This one wasted no time.

On its way to Santa Cruz?

Not sure. At 3:30 p.m., we spotted a monarch butterfly--same one?--roosting on our African blue basil as a dozen honey bees buzzed around, gathering nectar.

Meanwhile, the fellow members of her species are winging their way to their overwintering sites: the monarchs east of the Rockies to the Sierra Madre Mountains in Mexico, and those west of the Rockies to the California coast, including the Natural Bridges State Beach in Santa Cruz, and Pacific Grove in Monterey County.  They cluster in eucalyptus, Monterey pines, and Monterey cypresses.

Monarchs do not fly at night. They travel only during the day and then find a roosting spot for the night. "Roost sites are important to the monarch migration," according to the U.S. Department of Agriculture's Forest Service. "Many of these locations are used year after year. Often pine, fir and cedar trees are chosen for roosting. These trees have thick canopies that moderate the temperature and humidity at the roost site. In the mornings, monarchs bask in the sunlight to warm themselves."

How many miles can monarchs travel a day? Between 50 to 100 miles, the Forest Service says. "It can take up to two months to complete their journey. The farthest ranging monarch butterfly recorded traveled 265 miles in one day."

Monarchs use a combination of directional aids, including the magnetic pull of the earth and the position of the sun. They take advantage of the air currents and thermals as they head toward their overwintering sights.

To think that we humans can barely make it out of the neighborhood without our GPS devices!

As of 5 p.m., the monarch roosting on the African blue basil is still there. The bees are gone, back to the warmth of their hives.

Tomorrow, our little buddy will warm her flight muscles, sip a little nectar, and take flight. 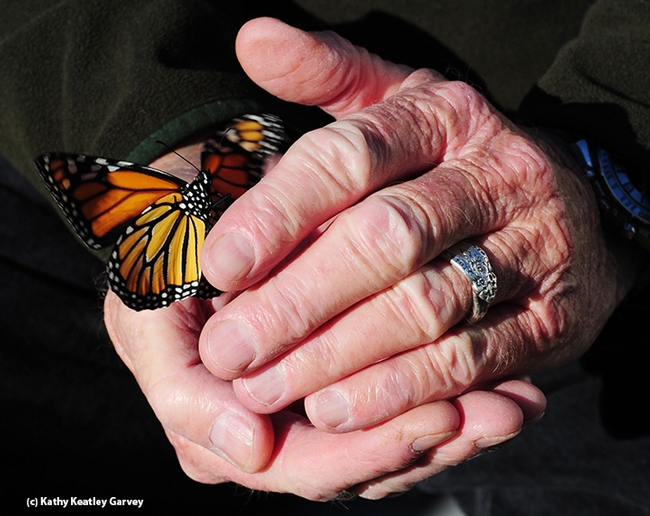 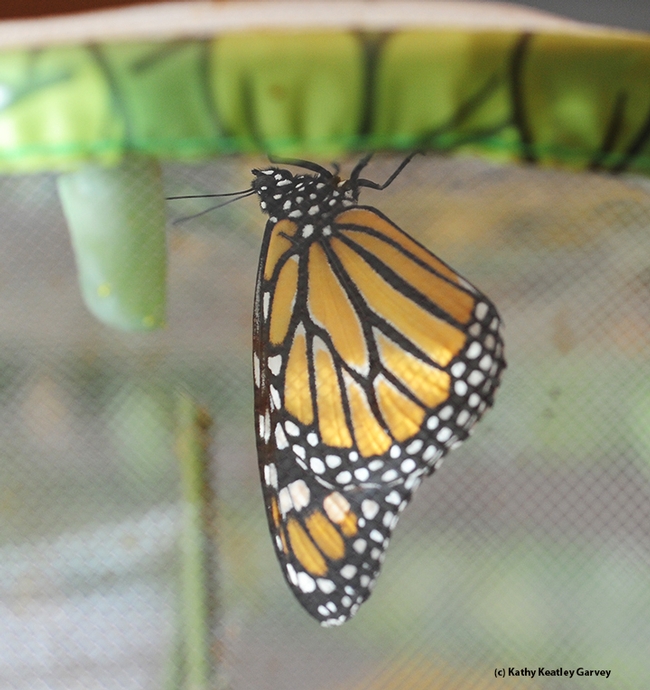 This was the scene inside the butterfly habitat before her release. Note the chrysalis next to her. (Photo by Kathy Keatley Garvey) 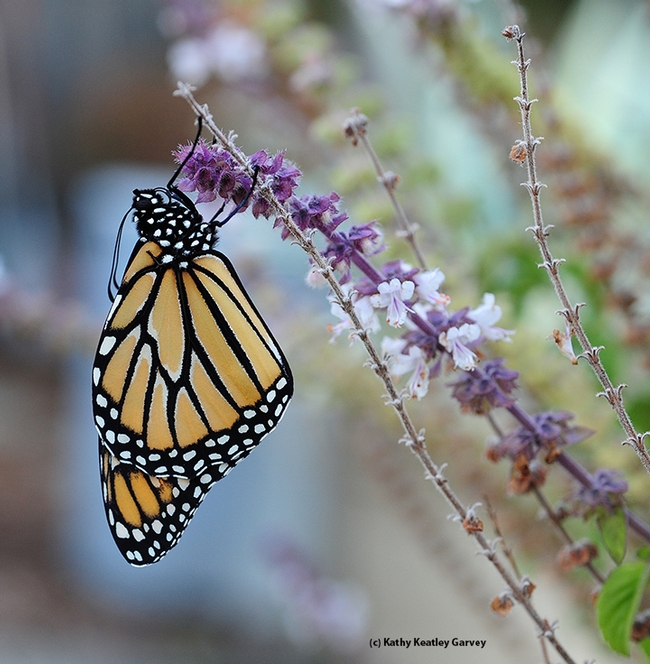 In the late afternoon, this monarch found a place to roost for the night--on an African blue basil. (Photo by Kathy Keatley Garvey)
Tags: monarch butterfly (28), overwintering (3), Pacific Grove (2), Santa Cruz (9), USDA Forest Service (3), Vacaville (14)
Comments: 0
From an Egg to a Caterpillar to a Chrysalis to a Monarch

Have you ever seen a monarch butterfly (Danaus plexippus) lay an egg on her host plant, the milkweed?

Have you ever seen a close-up of the egg? The larva or caterpillar? The chrysalis? The eclosure (when the adult emerges from the chrysalis)?

It's a fascinating sight.

Not all eggs will make it. Predators, such as lady beetles and their larvae, gobble up monarch eggs along with those tasty aphids. Birds, such as scrub jays, swoop down and make off with an occasional caterpillar. Then when the fifth instar finally starts to form a chrysalis, there's always the question of whether it will do so. Some are deformed and turn out to be half chrysalis  and half caterpillar.

But once you've watched a complete metamorphosis, you'll never underappreciate monarchs again. In fact, you'll probably start rearing them every year. We just reared our first two this month.

It's easy to see why teachers and their students get so excited. We remember writing about Sal (Sally) Levinson's newly published book, Butterfly Papercrafts,  which contains 21 indoor projects for outdoor learning. Levinson, who studied entomology at the graduate level at UC Riverside and UC Berkeley, wants to inspire youngsters to learn about our amazing world of  butterflies through art and a little science.

It's intended for youngsters ages 5-12, but really, it's also a beginner's book for all ages and a teacher's treasure.  And it's priced right--under $10 ($9.99). Readers can learn about the life cycle, from egg to caterpillar to chrysalis to adult; and craft a butterfly paper airplane, a caterpillar flip book, and a monarch finger puppet.

Meanwhile, North America's monarchs are heading for their overwintering sites in two main areas: the mountains of central Mexico, and choice spots along the California coast, including Pacific Grove and Santa Cruz.

"The annual migration of North America's monarch butterfly is a unique and amazing phenomenon," according to the U.S. Department of Agriculture's Forest Service website. "The monarch is the only butterfly known to make a two-way migration as birds do. Unlike other butterflies that can overwinter as larvae, pupae, or even as adults in some species, monarchs cannot survive the cold winters of northern climates. Using environmental cues, the monarchs know when it is time to travel south for the winter. Monarchs use a combination of air currents and thermals to travel long distances. Some fly as far as 3,000 miles to reach their winter home."

You'll see a migration map on the Forest Service website. You can check out the monarch sightings on this map and report the ones you see. 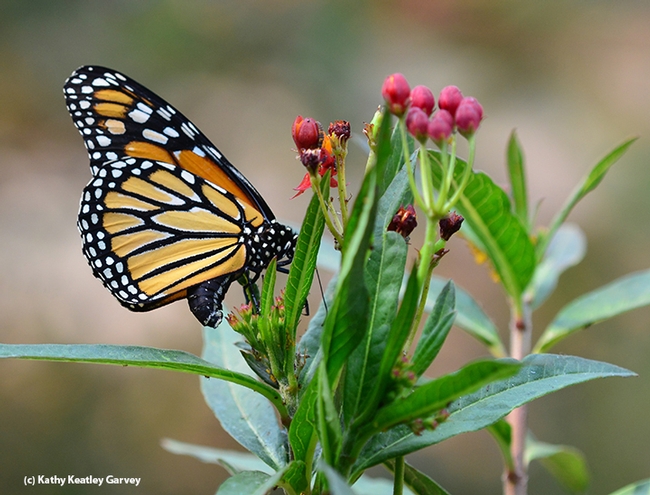 A monarch laying an egg on her host plant, milkweed. (Photo by Kathy Keatley Garvey) 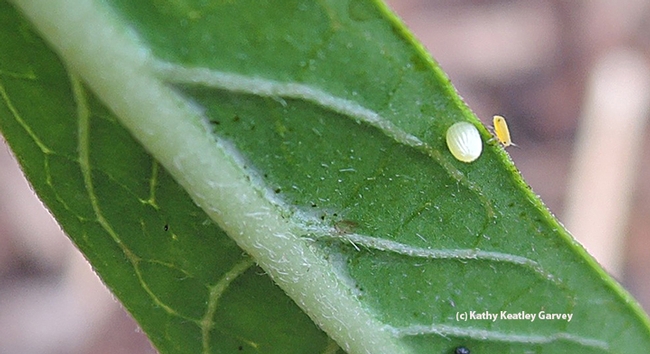 Close-up of a cream-colored monarch egg. Note the oleander or milkweed aphid next to it. (Photo by Kathy Keatley Garvey) 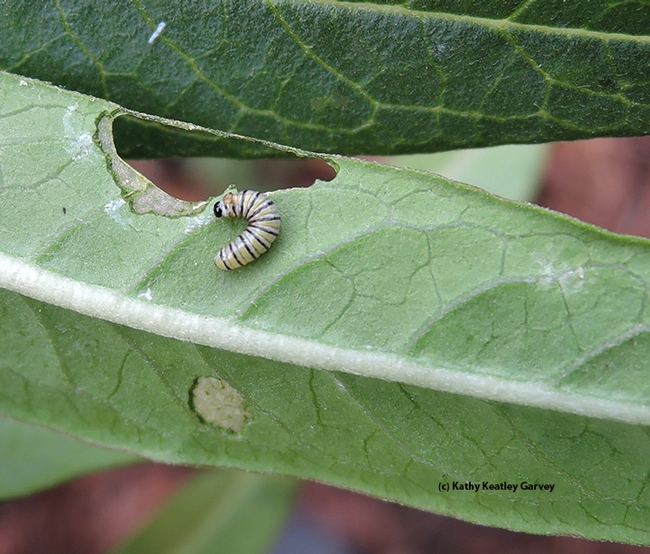 A very tiny caterpillar but it's big enough to start eating holes in the leaves. (Photo by Kathy Keatley Garvey) 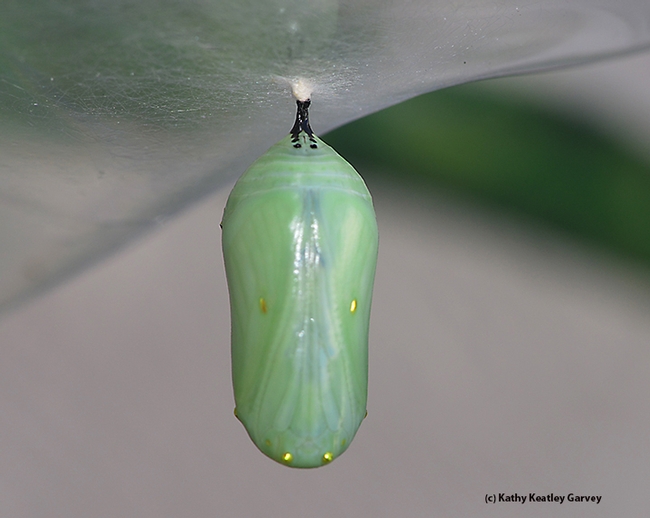 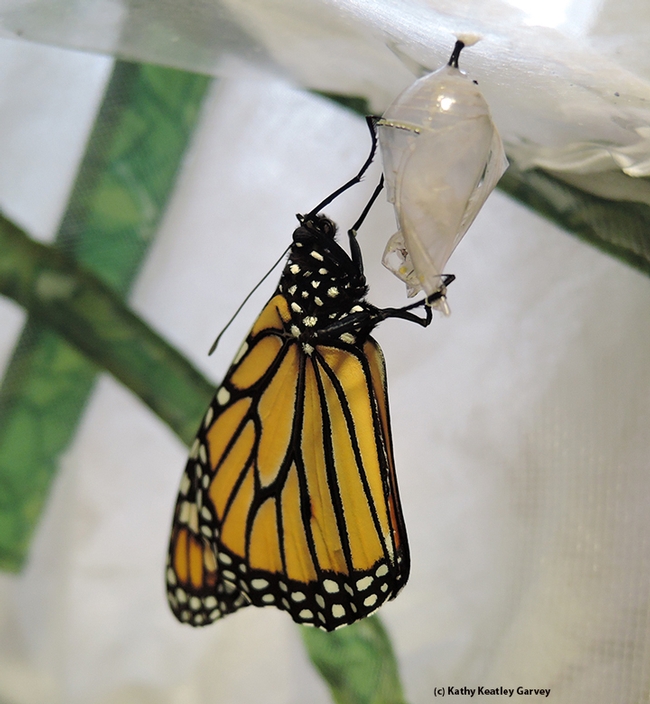 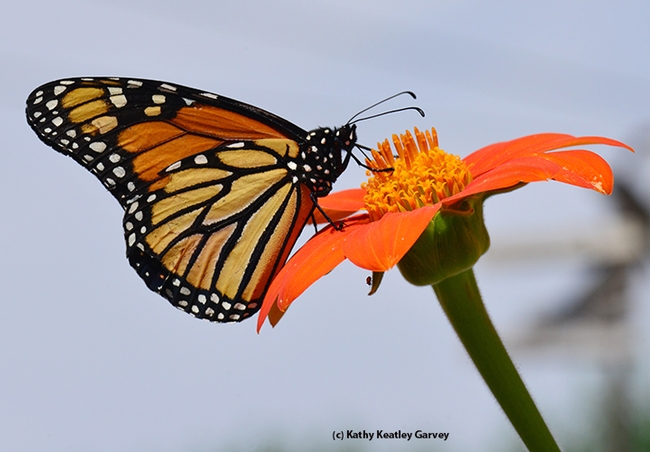 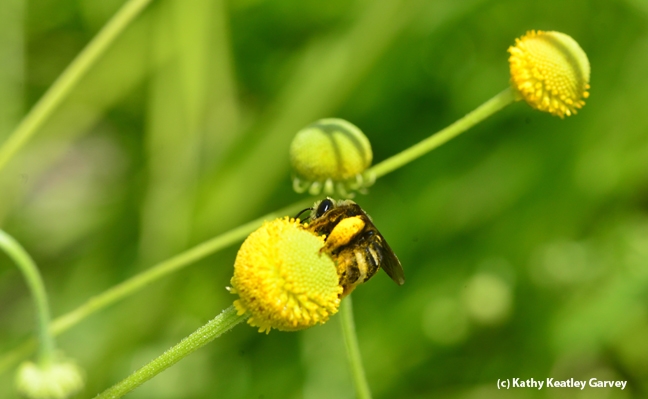 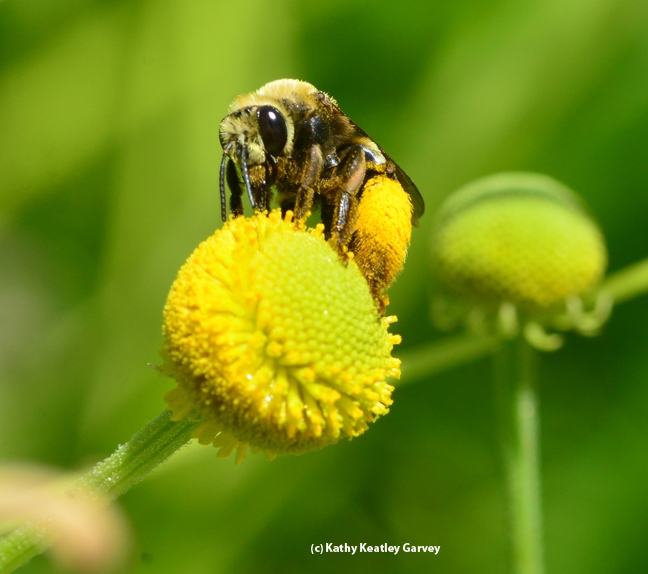