Professor Matt Forister of the University of Nevada, Reno (UNR Photo)
It's Sept. 4, 2019. We notice a monarch butterfly laying eggs on milkweed in an enclosed Vacaville retail nursery. We purchase the plant and add it to our pollinator garden.  Did the eggs ever hatch? Did we ever get caterpillars, chrysalids and adults?  No. Zero. Zilch. Nada.

Why? Hypothesis: the milkweed may have been treated with pesticides before it was shipped to the nursery.

Newly published research led by scientists at the University of Nevada, Reno (UNR), in collaboration with the Xerces Society for Invertebrate Conservation--and appearing in the peer-reviewed science journal Biological Conservation--sheds some light on pesticide contamination of milkweed plants being sold in retail nurseries across the United States.

The article, titled "Milkweed Plants Bought at Nurseries May Expose Monarch Caterpillars to Harmful Pesticide Residues," indicates that every single plant tested in stores across the nation--every single one!--contained multiple pesticides, "even those that were labeled 'wildlife-friendly," according to the researchers, who included co-author Matt Forister, a UNR biology professor.

The team collected leaf samples from 235 milkweed plants purchased at 33 retail nurseries across the United States to screen for pesticides. "Across all samples, we detected 61 different pesticides with an average of 12.2  compounds per plant," they wrote in their abstract. "While only 9 of these compounds have been experimentally tested on monarch caterpillars, 38% of samples contained a pesticide above a concentration shown to have a sub-lethal effect for monarchs." Christopher Halsh, UNR doctoral student
More than one third of samples contained a pesticide at a known harmful concentration for monarchs.  Those pesticides included neonicotinoids (neonics).

"In a previous study in California that primarily looked at milkweed in agriculture and urban interfaces, we had looked at a small number of plants from retail nurseries, and found that they contained pesticide but it was surprising to see the great diversity of pesticides found in these plants," Forister told Mike Wolterbeek in a Nevada Today news release.  "In many ways, they are as contaminated or even worse than plants growing on the edges of agricultural fields. That was a surprise, at least to me."

Forister, who is the Trevor J. McMinn Endowed Professor in Biology, Foundation Professor,  holds a doctorate in ecology from UC Davis, where he studied with major professor Art Shapiro, UC Davis distinguished professor of ecology and evolution.

Forister's doctoral student, Christopher Halsch, is the lead author of the paper. “The farther along in the life stage you go, the higher concentration you need to have a sublethal effect," Halsch explained. "For the caterpillars, this means a low concentration can have a more damaging effect than it would have on the butterflies.”

So did the plants labeled "wild-life friendly" have fewer pesticides on the leaves? No.

“That was the most shocking part," Halsch related. "The fact that plants labeled as potentially beneficial or at least friendly to wildlife are not better and in some cases might be worse than other plants available for purchase. This research sheds light on how pesticides may impact western monarchs, but many other butterflies are facing even steeper population declines, and pesticides are likely one driver.”

Thus, it's crucial that those milkweed plants that we purchase in retail stores--and elsewhere--be pollinator friendly and pesticide-free.

AsXerces' Pesticide Program Director Aimée Code, pointed out in the news article: “Everyone can take steps to address the risks we uncovered. Consumers can let their nurseries know they want plants that are free from harmful pesticides. Nursery outlets can talk with their suppliers and encourage safer practices, and government agencies can improve oversight. And it's important to keep gardening for pollinators for the long term, just take steps to reduce pesticide exposure: cover new plants the first year, water heavily, discard the soil before planting, as it may be contaminated, and avoid pesticide use.”

We asked entomologist and monarch researcher David James of Washington State University today what he thinks of the study: "We all suspected this was the case, given all the reports in social media of caterpillars dying, etc.  I'm glad they did this scientific study to confirm it. Pretty shocking, really."

Indeed, scientists fear that the rapid decline of monarchs could lead to extinction. The International Union for the Conservation of Nature (IUCN) placed the migratory monarch butterfly on its Red List of threatened species on July 21, 2022, classifying it as endangered.

"In the 1990s, nearly 700 million monarchs made the epic flight each fall from the northern plains of the U.S. and Canada to sites in the oyamel fir forests north of Mexico City, and more than one million monarchs overwintered in forested groves on the California Coast," according to the Xerces Society. "Now, researchers and citizen scientists estimate that only a fraction of the population remains, monarchs have declined by more than 80% since the 1990s from central Mexico, and by more than 99% since the 1980s in coastal California." 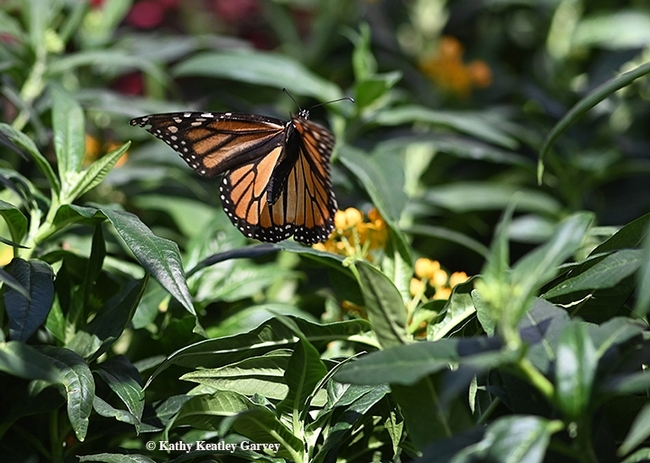